Shares in Standard Chartered soared on reports that the largest bank in the United Arab Emirates was considering a takeover bid.

First Abu Dhabi Bank was looking at an offer for its London-listed rival, whose shares jumped 20 per cent on the news, giving it a value of close to £23billion.

But the lender later pared its gains, as the UAE bank said: ‘First Abu Dhabi Bank confirms that it had previously been at the very early stages of evaluating a possible offer for Standard Chartered, but is no longer doing so.’

Takeover bid: First Abu Dhabi Bank was looking at an offer for its London-listed rival Standard Chartered, whose shares jumped 20% on the news, giving it a value of close to £23bn

Standard Chartered shares rose 6.8 per cent, or 44.8p, to 705.2p. Shore Capital analyst Gary Greenwood said that Standard Chartered, which employs 85,000 people and serves customers across nearly 150 markets around the world, has been ‘talked of as a bid candidate’ for more than two decades.

The Irish carrier celebrated a strong Christmas, the first with no hit from Covid in three years, with passengers rising by more than a fifth to 11.5m in December.

It operated 65,500 flights last month, taking the number of passengers carried throughout the year to 160m.

It now expects annual profits to reach between £1.1billion and £1.2billion – up from an earlier forecast of between £880million and £1.06billion. 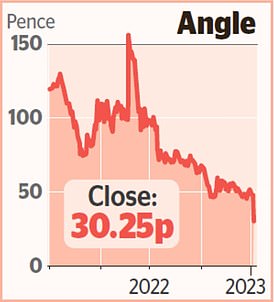 Angle, the maker of a blood test that can detect cancer, warned the year would be tougher than hoped.

The group said revenue was ‘likely to be materially below current market expectations’.

That followed a bleak end to last year when economic turmoil delayed sales.

As a result, Angle said revenues for 2022 were likely to have been slightly above £1million.

It was also on course for an annual loss of around £22million.

Victoria Scholar, at Interactive Investor, said: ‘After a challenging few years Ryanair is storming ahead.

The latest profit upgrade and traffic figures highlight the post-pandemic rebound in demand and the particular boost over the festive season.’

Miners rose after metal prices bounced back, with copper and aluminium making the biggest gains.

Heading in the other direction was Pearson. The education publisher took the biggest hit on the blue-chip index after Bank of America lowered its rating to ‘underperform’ from ‘neutral’. It fell 5.9 per cent, or 56p, to 898.4p.

Capricorn Energy attempted to overcome opposition to its proposed merger with the Israeli gas company Newmed. The oil group insisted that the deal would provide value for investors, who could pocket a dividend of around £520million.

The comments came amid fierce opposition, led by its third-largest shareholder Palliser Capital. Capricorn’s shares were flat at 245p.

Meanwhile investors in HSBC could be in line for large returns within the next year, according to analysts at Jefferies.

The broker said the 157-year-old bank was likely to benefit from the reopening of China and Hong Kong alongside the sale of its Canadian business, which could ‘unlock’ £11.75billion of buybacks and special dividends between 2023 and 2024.

Over at WPP, the advertising giant made its first acquisition of the year after snapping up the North American business Fenom Digital. Its shares inched up 0.3 per cent, or 2.8p, to 857.2p.