Serica Energy surged after it rebuffed a takeover bid from a smaller rival.

Shares in the North Sea-focused gas producer climbed 14.1 per cent, or 43p, to 348p after it emerged Kistos, a firm led by oil and gas entrepreneur Andrew Austin, approached Serica’s board with a cash and share offer that valued the group at just over £1billion.

The offer, which equated to 382p per Serica share, was a 25 per cent premium to the company’s closing price the day before the bid was revealed.

Serica climbed 14.1% after it emerged Kistos, a firm led by oil and gas entrepreneur Andrew Austin, made an offer that valued the North Sea-focused gas producer at just over £1bn

Kistos approached the Serica board in May to discuss the possibility of a merger but several offers were rejected. A counter bid for Kistos by Serica was also turned down.

Serica revealed the terms of the latest bid were the same as an approach made by Kistos in May and that it was now ‘considering its position’ and advised shareholders to take no action.

Kistos shares also jumped 5.2 per cent, or 24p, to 487p after news of the negotiations became public.

Under the terms of the deal, Serica investors would receive 0.2932 Kistos shares and 246p in cash for each share they hold. They will also own 50 per cent of the merged company.

Serica’s shares recently suffered a decline after the Government announced plans for a windfall tax on profits made by oil and gas firms to help ease the cost of living crisis battering households. The stock price slide may have sparked the initial interest from Kistos.

Despite its rejection of the Kistos bid, the rise in Serica’s shares indicated investors were hoping a higher offer could be incoming. 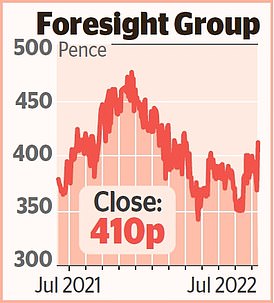 Foresight Group shot higher after snapping up an Australian infrastructure fund in a deal worth up to £79.6million.

The acquisition of Infrastructure Capital came as Foresight reported a profit of £27.9million for the year to the end of March, up from £15.7million the year before.

Boss Bernard Fairman said the performance was ahead of the company’s expectations when it listed on the stock market in February last year.

Markets were continuing to suffer from a cocktail of worries linked to the war in Ukraine, stubborn inflation and new Covid-19 lockdowns in China.

There was also renewed misery for UK retailers after data showed sales in June were down 1 per cent lower year-on-year as shoppers tightened their belts amid the cost of living crisis.

AJ Bell analyst Danni Hewson said the ‘dire’ figures ‘raises the spectre of recession in the UK as cost of living pressures continue to bear down on household finances’.

Worries about the global economy also weighed on oil prices, with Brent crude falling to just under $103 a barrel.

One of the biggest blue-chip fallers was Land Securities, which slumped 1.9 per cent, or 12.6p, to 662.4p after analysts at RBC downgraded the stock to ‘sector perform’ from ‘outperform’ and cut their target price to 675p from 950p.

The assessment was similarly bleak for rival British Land, which RBC lowered to ‘underperform’ from ‘sector perform’ and cut to 375p from 475p after its analysts took a ‘cautious view’ of the London office and UK retail markets. Shares in the group fell 1.8 per cent, or 8.3p, to 454.5p.

United Utilities added 0.8 per cent, or 8p, to 1041.5p after it struck a deal to sell its renewable energy business for £100million.

The United Utilities Renewable Energy division, which is comprised of solar, wind and hydropower assets across 70 sites, is being sold to SDCL Energy Efficiency Income Trust. But the assets will continue to provide power for the company’s water treatment businesses.

Meanwhile, construction group Balfour Beatty edged up 1.7 per cent, or 4.4p, to 268.2p after selling its 67 per cent stake in an American student housing complex at Purdue University, Indiana.

Balfour is expected to make a better than expected profit of £38.4million from the sale, which is due to be completed in August.