Shares in Smith & Nephew surged as a rebound in surgical procedures following the pandemic boosted its fortunes.

It enjoyed ‘strong growth’ from its sports medicine and ear, nose and throat businesses and an improved performance in orthopaedics.

Smith & Nephew, which makes bandages as well as hip and knee replacements, rose 3.4% after reporting revenue of £1bn for the three months to April 2, a 3.3%  rise year-on-year

Its advanced wound care segment, which includes medical dressings and pain relief gels, also saw revenues rise 8 per cent as it was boosted by sales in Europe.

Smith & Nephew noted that elective surgeries had recovered at the start of the quarter as hospitals began planning procedures again rather than focusing on treating Covid patients.

Boss Deepak Nath hailed the ‘encouraging start’ to the year while the firm left its forecasts for 2022 unchanged.

Lloyds added 1.2 per cent, or 0.54p, to 46.31p after analysts at Bank of America upgraded the stock to ‘buy’ from ‘neutral’ and upped their target price to 57p from 46p. Lloyds also won price hikes from UBS, RBC and Deutsche Bank. 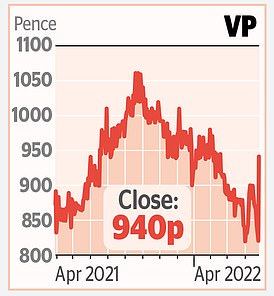 VP shot higher after putting itself up for sale.

The construction equipment and vehicle hire firm said a company linked to its chairman Jeremy Pilkington, and which owns a controlling stake, had told the board it planned to sell its holding.

As a result, VP was seeking a buyer and launched a formal sales process.

It said it had yet to receive an approach and there was no guarantee of an offer being made.

Mining giant Glencore rose 0.8 per cent, or 3.75p, to 483.5p after predicting earnings from its trading business would ‘comfortably’ exceed expectations as it cashed in on wild price swings in commodity markets caused by war in Ukraine.

That offset a cut to full-year production targets for copper, cobalt and zinc as it grappled with difficult ground conditions.

Wealth manager St James’s Place slipped 0.3 per cent, or 3.91p to 1278.5p after recording a drop in funds under management in the first quarter. It was looking after £154billion but this fell to £151billion by the end of March.

Recruiter Hays jumped 3.2 per cent, or 3.7p, to 121p after unveiling plans for a £75million share buyback, as it said business remained ‘highly cash generative’, and reiterated a commitment to return surplus funds to shareholders.

Pharma giant AstraZeneca received another regulatory boost after a drug was approved for use in the US. Ultomiris treats myasthenia gravis, a rare autoimmune disorder that stops muscles from working properly.

Shares rose 0.5 per cent, or 50p, to 10,562p. Mexican gold miner Fresnillo received a mixed assessment from analysts, with JP Morgan cutting their target on the stock to 850p from 900p while Jefferies increased theirs to 810p from 790p.

Kitchen fitter Howden Joinery was up 1 per cent, or 7.4p, to 777.4p after it reported revenues in the four months to April 16 rose nearly 22 per cent year-on-year as it increased prices. It remained ‘on track’ to hit its full-year outlook.

Schroders reported a rise in assets under management in the three months to the end of March – to £753billion from £732billion.

It reported revenues of £1.8billion for its first quarter, 13pc higher than the same period a year ago.