Stocks across the economy surged amid hopes a plan to cap energy bills will steer the country through the winter.

Prime Minister Liz Truss, appointed yesterday by the Queen, is finalising a package of support for households and businesses that could cost some £140billion.

Shares across the retail sector rose amid hopes the cap will allow shoppers to spend more money on the High Street rather than having most of their cash sucked up by spiralling energy costs.

Spending boost? Shares across the retail sector rose amid hopes the energy price cap will allow shoppers to spend more money on the High Street

Hargreaves Lansdown analyst Susannah Streeter said investors in the retail sector were ‘assessing’ whether the incoming government’s plans could help ‘ease the cost of living crisis’ and ‘put more money back into the pockets of their customers’.

There will also be hope among businesses that they could receive help to offset their own crippling energy bills, which are not currently covered by a price cap like households. 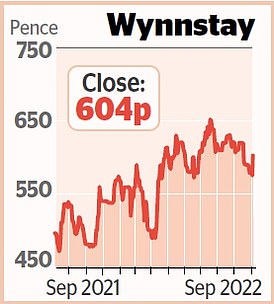 Wynnstay shares jumped yesterday after it hiked its full-year forecasts.

The agricultural supplies group said that due to good weather, the 2022 harvest started early, giving it ‘much greater visibility’ on its performance for the fourth quarter. The company was also boosted by the rising price of fertilizer it produces.

Results for the year to the end of October would be ‘significantly ahead’ of market expectations. Shares climbed 4.7 per cent, or 27p, to 604p.

Meanwhile, banking giant Lloyds was among the top blue-chip risers, gaining 4.1 per cent, or 1.78p, to 45.23p, after analysts at broker Jefferies hiked their target price on the stock to 83p from 78p and said the firm was likely to benefit from the ‘pro-growth’ agenda of the Truss government as well as ‘lower taxes and supply side reforms’ proposed by Kwasi Kwarteng, who the new PM is expected to appoint Chancellor.

Analysts also said the support package to offset higher energy bills was likely to lead to a ‘renewed interest in UK assets’, while the economic support measures could strengthen the pound, helping to mitigate inflation.

North Sea-focused EnQuest became the latest oil and gas group to cash in on the energy price boom as its profits more than doubled.

The group reported a pre-tax profit for the six months to the end of June of £158million, up from £42million in the same period last year, while revenues soared by 82 per cent to £816million.

But shares fell 5.5 per cent, or 1.7p, to 29.45p after it confirmed it would pay taxes this year due to the Government’s windfall levy on oil and gas profits.

Equipment rental firm Ashtead posted a 26 per cent rise in profit to £514million in the three months to the end of July following strong demand in its core markets.

However, the company also flagged that ‘increasing interest costs’ had prevented it from outperforming its previous profit forecasts. The shares were down 2.4 per cent, or 105p, at 4207p.

Packaging group DS Smith rose 3.4 per cent, or 9p, to 272p after highlighting ‘strong growth in profits’ over the last four months as its efficiency measures managed to offset a large rise in energy prices.