High Street retailers felt a chill amid worries about spending in the build-up to Christmas as inflation bites.

Tesco was forced to trim profit forecasts for the year, and shares in a string of household names tumbled into the red.

The slide came amid renewed concerns about the outlook for the economy, with households likely to rein in spending as energy bills and mortgage rates soar.

Oil stocks were on the rise after Opec+ agreed the deepest cuts to production since the 2020 pandemic.

The rally came a day after the boss of Shell opened the door for a windfall tax on oil and gas firms.

Ben van Beurden told an energy conference in London that helping the poorest in society may mean ‘governments need to tax people in this room to pay for it’.

In her first outing as Prime Minister at the Tory party conference, Liz Truss ruled out another windfall tax on energy giants.

On the acquisition front, engineering group Hill & Smith swooped on the US portable solar construction manufacturer and supplier National Signal. 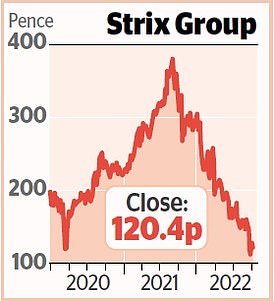 Strix has agreed to buy the Australian tap manufacturer and supplier Billi for around £38million.

The kettle controls maker expects to complete the takeover this year. To fund the deal, Strix raised around £13million by selling 11,304,347 shares at 115p, a 10 per cent discount to the closing price on Tuesday.

The AIM-listed firm has also refinanced its existing £80million debt facility and taken on a new £49million loan.

The deal is worth around £22.2million with a further performance-related payment of around £3.5million up for grabs.

Hilton Food Group had a much-needed boost from the City only weeks after its worst day on the stock market. Peel Hunt described the food packager’s operations in New Zealand and Australia as ‘world class’ following a visit.

‘These provide the blueprint for what can be achieved elsewhere,’ the broker added. Last month Hilton’s half-year results saw shares tumble 28.3 per cent after warning its full-year profit would be lower than expected.

Yesterday the shares gained 6.2 per cent, or 35p, to 597p. Meanwhile Hyve Group hailed a surge in business as some of its biggest in-person events returned in style.

The group is also in talks to sell its Turkish business for up to £8million as it trims its portfolio. The shares were up 8.2 per cent, or 4.1p, to 54.1p.

Housebuilder Redrow has renewed its commitment to ensuring that leaseholders have a safe place to live and are not saddled with the cost of repairing high-rise blocks.

In a win for cladding victims, it has signed up to the Welsh government’s building safety pact, meaning it will fix all buildings over 11 metres with fire safety issues which it has been involved in over the past 30 years.

It has set aside £200million as part of the pledge it signed in England in April and does not think this will increase, having agreed to the Welsh pact. Investors may need more convincing as shares fell 3 per cent, or 12.6p, to 410.6p.