MARKET REPORT: Publisher Pearson shares rise 12.7% on the back of strong interim results

It was, to use a football cliche, a day of two halves for shares, with yesterday morning’s gains evaporating in the afternoon session.

Publisher Pearson held on to its gains, rising 12.7 per cent, or 96p, to 852.6p on the back of strong interim results

So it was with evident relief that the market welcomed the company’s reaffirmation of full-year guidance. Indeed, the company boasted of an acceleration in the company’s margins sparked by its increasingly digital-focused platform.

Pearson now expects to hit its margin targets in 2023, two years earlier than previously expected, thanks to it unearthing further efficiencies of at least £100m for next year.

The first half of 2022 saw sales growth of 6 per cent year on year to £1.8bn, driven by its US Student Assessment and UK & International Qualifications arms as exam timetables normalise after the Covid-19 disruption.

Profits rose to £179m from £157m and the interim dividend was bumped up by 5 per cent to 6.6p. Shore Capital analyst Roddy Davidson was ‘pleased to note the positive momentum and growth outlook’ and tipped Pearson to be a ‘beneficiary of a positive medium-term outlook for global learning spend.’

Ondo Insurtech, the insurance claims prevention technology company, soared after it said it would begin rolling out its LeakBot leak detection device in Denmark in September on behalf of the country’s largest insurance mutual, LB Forsikring. A trial of 1,000 LeakBots has seen insurance claims halve, prompting LB Forsikring to roll out at least 10,000 devices, with 3,000 being distributed before the end of 2022. The shares leapt 22.7pc, or 1.25p, to 6.75p. 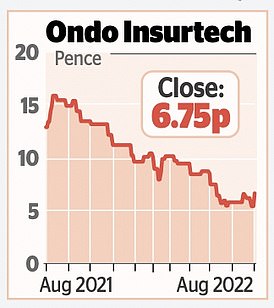 Whatever happened to sell in May and go away? Rathbones Group (up 3.1 per cent, or 56p, to 1866p) and Jupiter Fund Management (up 4.3 per cent, or 5.4p, at 130.8p) were the pick of the money managers. Ascential, which runs the Cannes Lions advertising exhibition, and XP Power were largely responsible for the FTSE 250’s lacklustre performance.

XP Power, meanwhile, tumbled 14.8 per cent, or 450p, to 2590p as it said its revenue growth in the first half of this year continued to be constrained by industry-wide component shortages, a five-week Covid19 lockdown in China, and extended component lead-times.

Margins were affected by lower production volumes and inflation, but the company said the price increases it had implemented in 2021 and this year should provide a larger benefit in the second half of this year and in 2023.

Half-year results from another FTSE250 stalwart, Spectris, also failed to come up to scratch with shares in the precision instrument specialist down 5.6 per cent, or 175p, to 2934p. But investors tucked into shares of Photo-Me, the firm that provides the photo booths and other kiosk-based services, including printing, food vending and laundromats.

The company, which has changed its name this week to ME Group, saw shares jump 4.9 per cent or 5p, to 107p, after chief executive Serge Crasnianski said it continues to grow its presence in the laundry market.