The surge came as it cashed in on pent-up demand from holidaymakers eager to get away after months of lockdown restrictions.

Pent-up demand: Premier Inn owner Whitbread  rose 6.35% after it reported like-for-like sales were 286% up on last year and 10.8% ahead of pre-pandemic levels

Whitbread boss Alison Brittain said the recovery of the UK business continued to be ‘ahead of expectations’ and was significantly outperforming the market.

The German market also recovered ‘more strongly than expected.’ Despite that, the labour supply remained ‘tight’ across the hospitality sector and as a result it was raising pay to try to attract and retain staff.

It also brought forward plans to refurbish some hotels and invest in more IT. It expected costs for the year to rise by £20-£30million.

‘Whitbread has shot out of the blocks post-lockdown. Like other hotel chains, it has benefited enormously from the return to a more normal tourism environment,’ said Adam Vettese, analyst at investing network Etoro.

Traders appeared to have shrugged off the likelihood of more interest rate hikes from the Bank of England and the US Federal Reserve.

Investors may also have sought bargains following a recent slump amid a cocktail of worries about the economy and inflation. 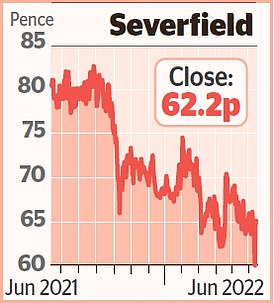 Severfield jumped after the steel firm’s order book hit record levels, totalling £486million at the start of June, up from £393million seven months ago.

Contracts included a film studio, offices and bridges as well as an order for Everton Football Club’s new stadium.

Profit for the year to March 26 was £27million, up 11 per cent year-on-year despite ‘challenging market conditions.’

Revenue hit £403million, from £363million a year ago, lifted by higher prices.

Helping lead the blue-chip stocks higher was London Stock Exchange Group, which jumped 5.2 per cent, or 350p, to 7088p after analysts at UBS upgraded the stock to ‘buy’ from ‘neutral’.

The bank said a 20 per cent fall in the share price since April represented an attractive entry point for investors, and retained its target price at 8500p.

Asset manager Abrdn fared less well, sliding 0.2 per cent, or 0.4p, to 169p after Credit Suisse downgraded it to ‘underperform’ from ‘outperform’ and snipped the target price to 180p from 230p.

Meanwhile, UK bank stocks were buoyed by the prospect of even higher interest rates, which usually boost the balance sheets.

In the mid-caps, FTSE 250 newsagent WH Smith shot up 8.5 per cent, or 115.5p, to 1474p after sales surpassed pre-pandemic levels for the first time as the travel industry recovered from the pandemic.

The book and stationery seller reported revenues in the 15 weeks to June 11 were 107 per cent of 2019 levels following a ‘particularly strong performance’ from stores in airports and other transport hubs.

Mining giant Antofagasta warned copper production for the year would be ‘at the bottom’ end of its guidance range as access restrictions prolonged the time needed to repair a leaky pipeline at a mine in Chile. Despite this, it rose 0.6 per cent, or 8p, to 1401p.

Fellow digger Rio Tinto rose 1.4 per cent, or 80p, to 5635p following the first delivery of iron ore from a mine in Western Australia.

Gudai-Darri is expected to operate for over 40 years with production due to reach full capacity next year.

Bitcoin miner Argo Blockchain slumped 7.8 per cent, or 2.7p, to 32.5p as the value of cryptocurrency markets continued to decline, and as the price of bitcoin seemed set to fall below $20,000 for the first time since December 2020.