Shares  in Amazon fell for a sixth day in a row as investors fretted over a sharp slowdown in business in the final three months of the year.

The stock closed down another 4.82 per cent last night in New York – taking losses since last Wednesday to 23 per cent.

The rout has wiped £250billion off the value of the US technology giant and more than £24billion off the fortune of founder and top shareholder Jeff Bezos.

Smurfit Kappa, which makes boxes and packaging for the likes of Unilever and Nestle, said volumes fell 3% in the three months to the end of September

Amazon shares are now at their lowest level since the first Covid lockdown and the company is once again valued at under $1trillion (£870billion). At its peak last year, it was worth close to double this.

Tech stocks have been hammered this year as soaring inflation, rising interest rates and a darkening outlook for the global economy called into question their sky-high valuations.

Amazon’s sell-off accelerated last week when it warned sales in the crucial final quarter, which includes Christmas, would be far lower than expected, though still at a whopping £121billion to £128billion. It also said profit over the period could drop to zero from £12billion a year earlier.

As the Federal Reserve raised US interest rates again last night, by 0.75 percentage points, the Dow Jones Industrial Average fell 1.55 per cent, the S&P 500 2.5 per cent and the Nasdaq 3.36 per cent.

And shares in paper and packaging firms took a hit after Smurfit Kappa warned of a slowdown in demand over the summer.

The FTSE 100 company, which makes boxes and packaging for the likes of Unilever and Nestle, said volumes fell 3 per cent in the three months to the end of September. It blamed inflation, the Ukraine war and shifting consumer demand. 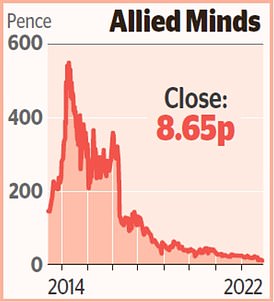 Investors in Allied Minds have voted in favour of the group delisting its shares from the London stock market.

The intellectual property investor, which was once backed by the fund manager Neil Woodford, said it would cancel shares on November 30.

‘We believe this is the right step as we look to realise value from the remaining portfolio of investments,’ said interim chairman Bruce Failing.

The company offset some of the demand fall with price rises of up to 3 per cent. It was an otherwise solid set of group results with revenue up 33 per cent to £8.34billion in the nine months to September while profit soared 43 per cent to £1.54billion.

Shares in Metro Bank rose 13.46 per cent, or 9.80p, to 82.60p after it said it returned to profit in September and has not seen borrowers struggling with repayments amid the cost of living crisis.

Weir Group inched up 1.79 per cent, or 28.50p, to 1620.50p on the news it remained on track to grow its revenue and profit for the year. The Glasgow-based engineering firm said its orders rose 19 per cent in the three months to September.

Meanwhile Foxtons, the estate agent, rose 3.33 per cent, or 1p, to 31p after it launched a share buyback programme worth up to £3million.

While the economic turmoil and rising inflation has been ‘challenging’ for Morgan Sindall, the construction group said its ‘sizeable and high-quality workload’ meant it is on track to meet expectations. Orders rose 3 per cent to £8.8billion at the end of September.

Over at Hiscox, the Lloyd’s of London insurer gained 5.92 per cent, or 53.20p, to 951.60p after its Re & ILS business saw its written premiums surpass the billion dollar mark thanks to favourable market conditions.

Across Hiscox as a whole, the amount of premiums written up increased 6.3 per cent to £3.2billion in the nine months to September.