Ocado shares slipped after it tapped investors for £578million of funding – offering up shares at a heavy discount.

The grocer-turned-tech-platform, which sells automated warehouses to supermarkets, said the fundraising would ramp up its expansion plans.

Having seen the pandemic accelerate adoption of online shopping, Ocado believes it needs to roll out its high-tech ‘customer fulfilment centres’ even faster.

The warehouses are run by robots that pick, pack and ship out grocery orders.

City analysts were split on the merits of the move. William Woods at Bernstein said despite ‘short-term pain’ the fundraising would be positive in the long run.

But advising investors ‘run’, Shore Capital’s Clive Black disagreed: ‘We do not see this as a fund-raise to deliver growth from a position of strength as opposed to a business that is burning cash and needs access to more equity capital and liquid resources.’

Russ Mould, investment director at AJ Bell, added: ‘Ocado remains a jam tomorrow story… at some point soon it will have to start generating profits and making money, as that’s been the missing component with its story so far.’

Ocado raised the cash by selling shares at 795p each, a 9 per cent discount to their closing price on Monday night. Shares yesterday fell 2.5 per cent, or 22p, to 855.6p.

The stock has fallen 50 per cent this year and 70 per cent since its Covid peak. Heading in the opposite direction in the FTSE 100 was packaging business DS Smith which clocked up higher profits despite ‘significant cost increases’.

The company – which benefited from the boom in deliveries during the pandemic and counts Amazon and Tesco among its largest customers – reported a 71 per cent rise in profits to £378million in the 12 months to April. 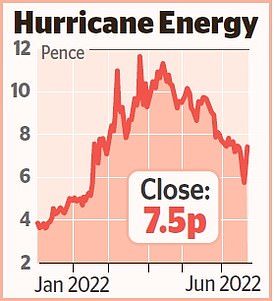 Oil and gas firm Hurricane Energy jumped 30.4 per cent, or 1.8p, to 7.5p as rumours swirled that a mystery suitor was preparing to make a bid.

One City source told the Mail that a potential buyer was running the rule over the business.

On online forums shareholders hoped an offer could come forth at up to 20p per share.

Hurricane, which searches for oil and gas in the North Sea, was close to collapse after production issues, but rising oil prices have helped it escape the worst of its problems.

Analysts warned the gains on the Footsie may be short-lived, however, with official figures today expected to show inflation running at around 9 per cent.

David Madden, a market analyst at Equiti Capital, said the gains amount to a ‘relief rally’ with concerns of a recession lingering on.

There was another day of turmoil for airlines and other travel stocks as chaos continued to plague the industry.

The sell-off came as easyJet, which on Monday slashed thousands more summer flights, saw its price target trimmed by UBS and Bank of America.