The London stock market enjoyed some New Year cheer as hopes around the lifting of Covid restrictions in China outweighed fears about the health of the UK and global economy.

The gains were echoed in Europe with the Dax up 0.8 per cent in Frankfurt and the Cac 0.4 per cent better off in Paris.

But Wall Street traders were more cautious. The Dow Jones Industrial Average fell 0.03 per cent, the S&P 500 dropped 0.4 per cent and the tech-heavy Nasdaq slid 0.8 per cent.

It is hoped the lifting of pandemic restrictions in China will boost the world’s second biggest economy once Covid cases ease.

But there are also fears over the strength of economies around the world, with figures showing output at British and Chinese factories sliding in December.

Hargreaves Lansdown analyst Susannah Streeter said: ‘The FTSE 100 has defied expectations of a muted start to the year with a big spring in its step, brushing off warnings from the International Monetary Fund about challenges ahead in 2023.

‘Despite a sharp contraction of business activity in China last month, traders are hopeful that the situation will start to improve.

Traders are looking ahead, rather than backwards, and are seizing onto glimmers of hope that once the winter waves die down, China’s recovery could be back on track.’

It was a rollercoaster ride for Cineworld after the world’s second largest cinema chain denied it was in talks with Odeon owner AMC Entertainment about the sale of any of its sites. 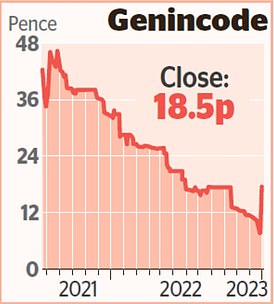 Shares in Genincode rocketed after it took a major step towards selling its products in the US.

The Oxford-based genetics company, which focuses on preventing cardiovascular disease, received approval for its lab in California to process diagnostic tests that use saliva or blood samples to examine the genetic likelihood of suffering heart attacks and strokes, and the genetically inherited ability to metabolise cholesterol.

The company, which has begun bankruptcy proceedings in the US, insisted it would not sell off assets individually, and instead was looking to sell the group as a whole.

Investors in Rolls-Royce cheered after Jefferies upgraded the jet engine maker’s rating to ‘buy’ from ‘hold’ and raised the target price to 125p from 90p.

Hotel Chocolat enjoyed a sweet reception from the market with shares soaring 8 per cent, or 12.5p, to 168p after the luxury confectioner agreed a joint venture in Japan.

Its partnership with Tokyo-based Eat Creator Corporation will include 21 Hotel Chocolat-branded shops across Japan.

But investors will be hoping for better returns this time around, given Hotel Chocolat wrote off around £22million last year after its previous partnership in Japan took a turn for the worse.

Inchcape completed its takeover of Derco, the largest automotive distributor in Latin America, for £1.3billion.

The saga involving Ferrexpo’s former boss, who is the Ukrainian iron ore miner’s largest shareholder, took another turn after he handed in his resignation letter to step down as a board member.

Last week Kostyantyn Zhevago, 48, who owns 50.3 per cent of the FTSE 250 firm, was arrested in France at the request of Ukraine amid allegations of money laundering and embezzlement.