Shares in Moonpig jumped more than 11 per cent after the City gave a thumbs-up to its £124million purchase of gift group Smartbox.

The online greetings card specialist said the deal will boost revenues to £350million next year, while enhancing profit margins and so adding to earnings per share.

Smartbox’s main assets are gifting brands Buyagift and Red Letter Days. The latter is a gift experience group previously owned by former Dragons’ Den judge Rachel Elnaugh until it collapsed into administration in 2005.

Blast off: Moonpig said its acquisition of gift group Smartbox will boost revenues to £350m next year, while enhancing profit margins and so adding to earnings per share

Rescued by fellow Dragon Peter Jones and Theo Paphitis, it was sold to Smartbox in 2017.

Moonpig has been ‘trying hard’ to crack the gifting market, with Russ Mould, investment director at AJ Bell, saying the acquisition price was ‘not excessive’ at nine-times underlying earnings.

‘Given Red Letter Days’ tarnished history, Moonpig shareholders will be hoping this is not a cursed business and one which the new owner will regret buying,’ Mould added.

Set up in 1986 as a spin out from Queen’s University Belfast, the company provides digital services to customers such as the NHS.

Annual revenues grew 29 per cent to almost £303million, and Kainos chief executive Brendan Mooney provided the upbeat assessment of prospects. The shares, which last week traded at 18-month lows, leapt 19.3 per cent, or 199p, to 1231p.

Turning to the wider market, London’s main indices continued on the front foot, where they finished off last week. 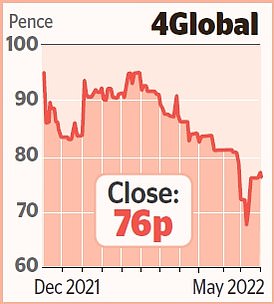 It is almost 10 years since the London Olympics. So, brace yourself for endless re-runs of Super Saturday – which took place on August 4, 2012 – when Team GB bagged three gold medals in 44 minutes.

The return from the games was tangible – fourth place on the medal table.

Harder to determine was the social and economic legacy. But data analytics specialist called 4 Global (flat at 76p) used its expertise to measure the financial and health impact of the event.

Like Kainos, a lot of the risers were climbing off recent troughs, with Royal Mail heading up the blue-chip risers, up 5.3 per cent, or 16.6p, to 332p after recently sinking to its lowest since Christmas 2020.

Pantheon International, the private equity investor, contributed to the FTSE 250’s gains, having rocketed 5.7 per cent, or 16p, to 296p after it announced further monthly net asset value growth.

Among the small caps, Quantum Blockchain Technologies rose 21.6 per cent, or 0.4p, to 2.25p after it said it has started ‘live experimental bitcoin mining’, the final step of nearly a year’s work by one of the company’s two machine learning teams.

Collecting data from its mining activity has led to the development of its first two ‘knowledge-based algorithms’ being deployed, with mine testing taking place and the firm hoping to file patent applications.

In other sectors, marketing software company Pelatro’s shares jumped 21.3 per cent, or 4p, to 22.75p after its full-year results revealed a reduced loss.

Futura Medical was up 10.8 per cent, or 2.95p, to 30.4p after saying its topical erectile dysfunction treatment would be distributed as an over-the-counter treatment throughout the European Union, UK and Switzerland via a five-year contract with French group Cooper Consumer Health.

There were not many big fallers among the big caps, save for Intertek, where investors were getting out ahead of the product testing group’s trading update tomorrow. The stock was down 3.9 per cent, or 193p, at 4706p.