The Ukraine-focused miner said none of its workers were injured following missile strikes on cities such as Kyiv and Lviv but bombs damaged state-owned electrical infrastructure and reduced the power supply available.

As a result, it has ‘temporarily suspended’ production while engineers carry out repairs. Shares sank 4 per cent, or 5.1p, to 121.9p.

Liberum maintained its estimates on Ferrexpo after the group insisted it has enough stock to continue selling. Last week, it said eight workers have died while serving in the Ukrainian forces.

In a sign that Government efforts to calm markets appeared to have fallen short, the Bank of England warned of a ‘material risk’ to financial stability and said it would step in to buy more bonds to ease pressure on the fluctuating price.

In America, JP Morgan Chase boss Jamie Dimon warned the US could face a recession in six to nine months.

Among the mid-cap stocks, thread maker Coats Group hiked its medium-term target on sales growth to 6pc a year from 5 per cent. Shares added 1.3 per cent, or 0.7p, to 52.9p. 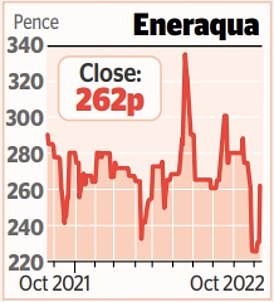 Eneraqua Technologies surged 13.9 per cent, or 32p, to 262p following strong results and an upbeat outlook.

Revenue at the group, which advises clients on how to be more energy efficient, almost doubled to £24.2million in the six months to July 31 compared with a year earlier.

It plans to roll out a product to cut families’ energy and water bills, saving households around £360 a year.

Daily Mirror owner Reach appeared to brush aside weaker trading last month as it looked ahead to potential advertising revenue from Black Friday, Christmas and the World Cup.

Revenue fell 4.1 per cent in September following the death of the Queen as newspaper sales rose but advertising income fell. Shares fell 1 per cent, or 0.8p, to 76.25p.

Pub group Marston’s said strong drink sales have driven encouraging trading. The business, which operates 1,468 pubs and has 12,000 workers, said people are still visiting pubs and it is optimistic about an important winter that includes the football World Cup.

Robert Walters’ profit for the three months to September 30 was 22 per cent up on a year earlier, at £112million.