The rags-to-riches businessman, who founded the trading firm in 1989, watched the value of his stake dwindle as clients struggling to get to grips with inflation and war in Ukraine quit the platform.

In an update for the six months to the end of September, CMC said the number of trading clients fell 7 per cent, and it was suffering from rising costs.

CMC said the number of trading clients fell 7%, and it was suffering from rising costs

CMC benefited from a surge in trading activity during the pandemic when Britons looked for ways to make money and pass the time. But as lockdown restrictions loosened, activity on the investment platform has subsided.

And its expansion projects are proving more expensive than thought. Operating costs came in at £106.3million, up 28 per cent from the same period last year. The shares were down 12.7 per cent, or 34p, to 234p.

Cruddas, a former Tory party treasurer and donor, and his wife Fiona own a combined 62pc of the company, worth £407.5million.

The strike fuelled fears that Poland, a Nato member, could be dragged into the war. But president Andrzej Duda said: ‘There is no indication that this was an intentional attack on Poland.’

Nato secretary general Jens Stoltenberg also said a Ukrainian air defence missile was the likely cause though ‘Russia bears ultimate responsibility’ due to its attack on Ukraine.

Software giant Sage ended its financial year in style as revenue rose 5 per cent to £1.95billion for the year to September with its business cloud division soaring 24 per cent. Shares added 7.3 per cent, or 55.4p, to 811.2p.

Mr Kipling and Bisto owner Premier Foods grew in the first half of the year to October 1, as more consumers stay in rather than eat out. Revenues rose 6.2 per cent to £419million and profits swelled by more than a tenth to £47million. But the shares fell 2.3 per cent, or 2.6p, to 108.4p.

Kromek has landed a contract worth nearly £5million with a UK government department for ‘biological threat detection systems’. 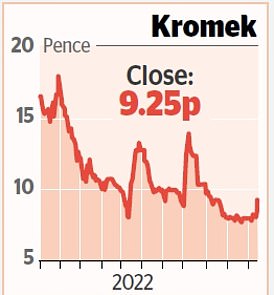 Boss Arnab Basu said: ‘We believe technologies that can provide information about emerging threats in near real time will be a critical component of strategies.’

Meanwhile, Hill & Smith hailed a strong demand after the safety barrier maker said profit for the year should be above £89.7million. It climbed 5.3 per cent, or 58p, to 1150p.

Serco sank into the red even though it won a £200million contract with the Ministry of Defence to provide services for the Royal Navy. Its share price dipped 0.7 per cent, or 1.2p, to 164.9p.

Deliveroo tumbled 7.1 per cent, or 7.02p, to 92.58p after ending a seven-year stint in Australia. The online delivery company placed its subsidiary there into voluntary administration as it said that the business cannot become profitable without ‘considerable financial investment’.