London-listed Diversified Energy saw its shares sink after it become embroiled in a row over the impact of its gas wells on the atmosphere.

The FTSE 250 group, which is the largest well owner in the US with over 61,000 in its portfolio, found itself on the defensive after a Bloomberg report said several wells owned by the company were leaking methane, a highly potent greenhouse gas.

Diversified specialises in buying up old wells and squeezing out any remaining profit from them before they are plugged with cement. Most of the wells are located in Appalachia, in the eastern US, known for coal mining and oil and gas drilling.

Diversified Energy found itself on the defensive after a Bloomberg report said several wells owned by the company were leaking methane, a highly potent greenhouse gas

However, given their age and often low levels of maintenance, the decrepit wells can often be left spewing out methane.

Ted Boettner, a member of the Ohio River Valley Institute, a think-tank that researches the Ohio Valley and Western Pennsylvania, said the company’s leaking wells were ‘like a liability bomb that’s destined to explode’.

However, Diversified hit back in the wake of the report, saying it does not reflect ‘the positive environmental, social and economic benefits stemming from the company’s investment into – and stewardship of – its assets’.

It added that the highlighted wells represented ‘less than 0.05 per cent’ of its portfolio and that its measured absolute emissions were ‘significantly less than those from newer wells’. Shares tumbled 19.9 per cent, or 25.2p, to 101.4p. 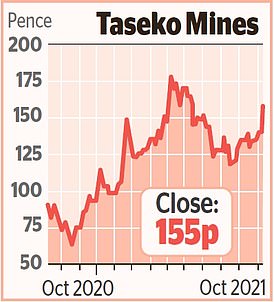 Taseko Mines shares surged after the Canadian firm unveiled a strong rise in production from its Gibraltar site in British Columbia, Canada.

The Vancouver-based firm reported that the mine produced 34.5m pounds of copper in the third quarter of this year, an increase of 29 per cent on the second quarter.

The company also unearthed 600,000 pounds of molybdenum, an element used in the production of stainless steel.

The figure was 50 per cent higher than the amount produced in the previous quarter.

Predictions of interest rate hikes before the end of the year as the Bank of England moves to rein in inflation sent a chill through the markets, while a record number of UK job vacancies underlined pressure on firms as they grappled with supply chain disruption and the surging cost of energy.

‘As the labour market tightens again, the fight for staff is increasing, with starting salaries rising at the fastest rate in 24 years,’ said Susannah Streeter, senior investment and markets analyst at Hargreaves Lansdown.

‘Although it signifies that pandemic recovery is continuing and demand is back, businesses can no longer turn on the easy taps of labour from the European Union to ease labour shortages.’

Worries over the fate of troubled Chinese property giant Evergrande continued to rattle mining stocks, with investors fearing the company’s collapse could trigger a sharp drop in demand for raw materials such as steel and copper.

Shopping delivery firm Ocado motored up 5.4 per cent, or 84p, to 1649.5p after US supermarket giant Kroger announced that it will open new fulfilment centres as part of an expansion of its delivery business.

Housebuilder Vistry inched up 0.5 per cent, or 5.5p to 1125p after saying its chief executive will stay on for a little while longer.

Greg Fitzgerald, who took over in 2017, had said he would only serve in the role until the end of 2022. Vistry said he is now willing to lead the business for a longer period.

Hipgnosis Songs Fund rose 5 per cent, or 6p, to 126.2p after investment management firm Blackstone took a stake in the group.

Under the deal, Blackstone will invest £735million to help Hipgnosis buy more music rights and catalogues.