MARKET REPORT: Investors tuck into Just Eat as it ponders sale of its US arm Grubhub pushing shares in the food delivery group up 2.1%

Investors tucked into Just Eat as the firm mulled a possible sale of its US arm Grubhub less than two years after buying it.

Shares in the takeaway delivery group shot up 2,1 per cent or 46.5p to 2217.5p after it revealed it was ‘exploring’ a sale of Grubhub or bringing in a partner to offload a stake in the business.

However, it stressed that agreement was not guaranteed.

On the menu: Just Eat shares shot up 2.1% after it revealed it was ‘exploring’ a sale of its US arm Grubhub or bringing in a partner to offload a stake in the business

Just Eat bought Grubhub in June 2020 in a £5.8billion deal as part of a bid to break into the lucrative US market. The merger came amid booming demand for food delivery services in lockdown.

The acquisition created the largest food delivery group outside China. However, this seems set to end as the pandemic subsides.

Plans to offload Grubhub came as Just Eat reported a 1 per cent year-on-year drop in orders to 264.1million in the first quarter of 2022 as it struggled to beat its numbers from the pandemic.

However, transaction values grew 4 per cent to £6billion as the price of an average order rose. Despite this, Just Eat warned it expected growth in the second quarter of the year to ‘remain challenging’ and cut its full-year forecasts.

The group expected its transaction values to rise by mid-single digits year-on-year, down from previous estimates of growth in the ‘mid-teens’.

However, investors shrugged off the downgrade amid hopes a sale of Grubhub could boost prospects and revive its share price, which has fallen 70 per cent in 12 months. 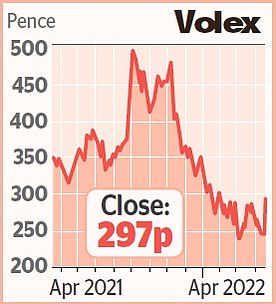 Shares in Volex surged on the back of an upbeat trading update.

The company, which makes power cords as well as charging plugs for electric cars, predicted its profits for the year to April 3 would be ‘ahead of expectations’ at over £42million, up from £32.9million the year before.

Volex noted that revenues from its electric vehicles business had almost doubled during the period.

However, he warned that the value of any deal would be closely watched as anything lower than Grubhub’s purchase price ‘could embarrass current management’.

‘If this is the right decision for the business then it seems logical for Just Eat to press ahead with a sale,’ Mould added.

Things were similarly gloomy in the FTSE 250, with gold digger Centamin tumbling 5.5 per cent or 5.32p to 92p after its gold sales fell 13 per cent in the first quarter of 2022.

Mid-cap defence firm QinetiQ climbed 1.9 per cent or 6.4p to 343.8p after upgrading its profit forecasts. The group reported that its results for the year to the end of March would be ‘marginally ahead’ of its previous guidance.

It noted ‘significant growth’ in Europe, the Middle East and Africa as well as ‘excellent’ performances in the UK and Australia.

Transport firm FirstGroup announced that former BT executive Graham Sutherland had been appointed as its new chief executive with effect from May 16. Shares in the company rose 0.1 per cent or 0.1p to 116p.

Oxford Biomedica slumped 14.7 per cent or 94p to 545p after forecasting a fall in sales this year as it paused manufacturing of AstraZeneca’s Covid-19 vaccine.