Shares in Jet2 swung back into profit as the tour operator cheered a strong recovery of its package holidays.

Jet2, which was formerly known as Dart Group, made profits of £505million in the six months to September, compared with a £195.1million loss a year earlier.

The profits came despite the low-cost airline dishing out more than £50million to compensate customers for summer travel disruption in UK airports. Its revenue also jumped 730 per cent to £3.56billion in the period while passenger numbers were up by 632 per cent to 11.2m.

Takeoff: Jet2, which was formerly known as Dart Group, made profits of £505m in the six months to September, compared with a £195.1m loss a year earlier

Unlike other airlines, the business has been well prepared for the surge in bookings with more than 8,000 staff retained throughout the pandemic.

And with a steady stream of winter bookings already in the pipeline, profit for the year is set to beat market expectations.

Sophie Lund-Yates, lead equity analyst at Hargreaves Lansdown, said: ‘Jet2’s swing from losses to profits can only be described as impressive, and reflects enormous increases in revenue as the industry recovers from tough lockdown restrictions.’ Jet2 rose 2.9 per cent, or 26p, to 917.8p.

There was also a boost for the wider airline and travel sector. 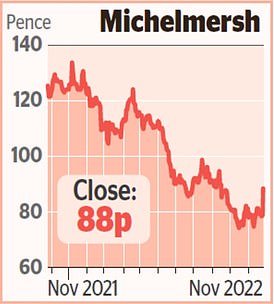 Michelmersh soared after the brick maker snapped up a rival for £6.25million.

The AIM-listed firm bought Fabspeed, which specialises in making chimneys, arches and canopies, as trading remained strong in the final quarter with supply chain and energy costs kept under control.

It now expects revenue and profit to be above market expectations.

In further good news, it launched a share buyback programme worth up to £3million. The shares surged 12.1 per cent, or 9.5p, to 88p.

Testing, certification and inspection company Intertek was another riser after its revenue rose 5.6 per cent to £1.08billion from July to October.

It said lockdown restrictions in China had a significant impact on its business between March and June.

But it has been operating as normal in the country since July and business has rebounded quickly.

The landlord which provides housing for homeless people recovered only a day after a row broke out over its financial stability.

Home Reit said a report pub lished by the US short-seller Viceroy Research was ‘inaccurate and misleading’ concerning questions over its business model and ability to collect rent.

There was some respite for the wider property sector, with warehouse giant Segro gaining 2.6 per cent, or 21.2p, to close at 837.2p and Hammerson, the owner of the Birmingham Bullring shopping centre, adding 4.6 per cent, or 1.11p, to 25.42p.

At the same time, storage unit provider Safestore cheered a rise in revenue and the opening of eight sites across Europe.

Elsewhere, small cap used car dealer Motorpoint fell 1.3 per cent, or 2p, to 156p after warning its focus on investing in technology, development and marketing would eat into profits.

The group invested £3.5million in the business for the six months to September. This helped lift its market share to 3.7 per cent, compared with 2.9 per cent a year earlier.

That generated record first-half revenues of £786.7million but also hit the company’s profits, which plunged 77.8 per cent to £3million.