Gambling and bargain discounters were among the biggest risers on London’s top index amid a slew of weak economic data.

ONS statistics published yesterday show that the price of everyday goods such as pasta, chips and vegetable oil are soaring as the cost of living crisis mounts.

The day before, PMI figures revealed that output in the manufacturing and services sectors in October shrank at the fastest pace since January 2021, hinting that the UK might already be in recession. But even in a crisis there are winners.

Top of the market was gambling giant Flutter, which saw its shares rise 5.6 per cent, or 600p, to 11375p as punters enjoy a bet during a downturn.

Winner: Paddy Power and Betfair-owner Flutter saw its shares rise 5.6% as punters enjoy a bet during a downturn

And B&M European Value Retail, where Terry Leahy, the former chief executive of Tesco (up 0.1 per cent, or 0.2p, to 211p), was chairman before he left for Morrisons, gained 4.8 per cent, or 14.6p, to 320.4p with consumers looking to snap up everyday goods such as curtains, cutlery and vacuum cleaners on the cheap.

Neil Wilson, analyst at Markets, said: ‘It is grim out there at the moment but there are goods that everybody needs. B&M always does well in a downturn as do the bookies. It’s a sort of escapism.’

As Rishi Sunak began his first day as Prime Minister, most traders were focused on what moves he will make to stabilise the economy following the chaos of his short-lived predecessor Liz Truss.

Not to do so would have unsettled investors who are eagerly awaiting the Halloween Budget next week. They don’t need anything to spook them before that.’

But miners once again weighed on the blue-chip index amid ongoing concerns of a demand hit following the slowdown in Chinese economic growth. 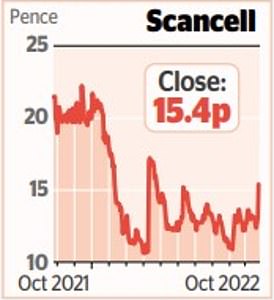 Investors in Scancell cheered after the biotechnology group landed a £544million deal.

The company will work with Danish-based Genmab, which is listed on the Copenhagen stock exchange and the Nasdaq exchange in New York, to develop and commercialise an antibody to treat illnesses such as cancer.

Banking stocks were also a mixed bag after HSBC (down 6.8 per cent, or 32.45p, at 442.65p) flagged rising losses amid the global economic downturn and a crisis in China’s property sector.

Shares in commercial property firms and real estate investment trusts soared on a positive day for the sector.

There was also good news for Urban Logistics after the property investment group cheered an increase in rental rates, lettings and acquisitions.

Rental rates were 59 per cent higher between April and September compared with a year earlier, while 12 new lettings helped to bring in an extra £4million.

Urban Logistics also completed 13 takeovers in the period, including an industrial warehouse in Glasgow.

MoneySupermarket shot up 3 per cent, or 5.2p, to 177.6p after the Canadian bank RBC insisted last week’s sharp sell-off in response to the launch of Amazon Insurance Store was ‘excessive’.