Investors in The Hut Group (THG) were given some respite only a day after the fourth largest shareholder said it would dump its entire stake.

In a glimmer of hope for the struggling online nutrition and beauty retailer, shares in THG rose 9.8 per cent, or 4.48p, to 50.32p.

The rally came a day after Softbank said it was selling its 6.4 per cent stake to THG founder Matthew Moulding and Qatari investors at a heavy discount.

Respite: In a glimmer of hope for the struggling online nutrition and beauty retailer, shares in THG rose 9.8 per cent, or 4.48p, to 50.32p

More than 80 per cent of the Japanese conglomerate’s holding will be gobbled up by the Qatari sovereign wealth fund, with the rest being bought by Moulding, who already owns a near-15 per cent stake worth £95million.

THG said the move by its founder ‘further evidences his commitment’ to the business, but the news brought a mixed reception from the City.

Canaccord Genuity issued a ‘buy’ rating and target price of 81p on THG shares, saying it nutrition and beauty businesses have ‘advantages’ over its competition.

But JP Morgan analysts pointed out the sale of Softbank’s stake at 39p a share represented a 15 per cent discount on Monday’s closing price of 45.8p.

The broker reiterated its ‘neutral’ rating, adding that it struggles to see how THG’s share price can be lifted. 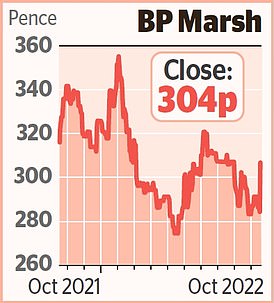 The venture capital investment group raked in £17m in the six months to July 31, more than double the same time last year.

‘Investors appear to have regained optimism after the U-turn in government policy and hopes that the new earnings season that kicked off last week might not be as bad as feared,’ said AJ Bell investment director Russ Mould.

Meanwhile, shares in Mike Ashley’s Frasers Group inched down 0.7 per cent, or 4.5p, to 653.5p despite the retailer meeting the threshold it needed from MySale investors to seal its takeover of the Australian firm.

The owner of Sports Direct, House of Fraser and Jack Wills has tabled a £13.6million or 2p per share offer to snap up the remaining shares it does not already own.

Among the mid-cap stocks, shares in the brick maker Ibstock climbed 4.9 per cent, or 7.4p, to 159.1p after it hailed positive trading across its clay, concrete and futures businesses.

On the back of encouraging results in the three months to the end of September, the group now expects to exceed its previous profit estimates for the year.

MoneySupermarket shares rose 5.3 per cent, or 10.6p, to 209.2p after the comparison website hailed its role in helping households make savings as customers shopped around to find the best deals.

The group expects its profit for the year to be at the top end of its range of between £108.5million and £115.5million following strong trading in the three months to the end of September.

While this played a part in revenue sliding 7 per cent to £449million for the three months to the end of September, the group expects its profit for the year to be in line with expectations.

Nick Kirk will become chief executive on January 1, 2023 once Steve Ingham steps down on December 31 having been in charge since 2006.