Britain’s major housebuilders came under pressure after the industry committed over £2billion to remove dangerous cladding from buildings.

The commitments are a victory for Housing Secretary Michael Gove, whose aggressive approach to the cladding crisis has won him few friends in the sector.

Shares in FTSE 100 builder Taylor Wimpey sank 2.1% alongside its blue-chip rivals, with Barratt down 2% while Persimmon fell 2.2% and Berkeley going down 1.5%

Under the agreement, 35 of Britain’s biggest builders have agreed to fix their own constructions of the last 30 years that are between around 35 and 60 feet in height.

The industry will also pay another £3billion through a new building safety tax.

Removing unsafe cladding became a critical issue after 72 people died in the Grenfell Tower fire in 2017.

But investors are unhappy as it means cash that could have been used for dividends, share buybacks and land buying would now be diverted towards cladding repairs.

AJ Bell analyst Danni Hewson added that the rising cost of living was unlikely to be any help for the sector as many people saving for a deposit on a house would have less to put away each month.

She said: ‘Rising inflation also strengthens the argument for interest rates to keep going up, and that will make mortgages more expensive and potentially cause a ripple effect in the property market if fewer people are able to buy a house or flat.’

Markets were unsettled by grim UK inflation data, which in March surged to 7 per cent, its highest in 30 years, amid soaring petrol prices as war in Ukraine sparked fears of supply disruption and shortages. 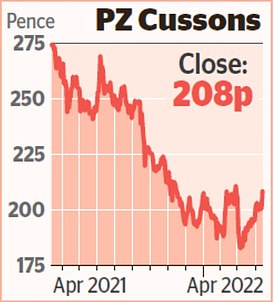 PZ Cussons rose after strong growth in its third quarter.

For the three months to the end of February, the maker of Imperial Leather soap reported revenue of £146.3million, up 8.5 per cent year-on-year.

Revenue trends continued to improve following a decline in the first quarter, as it partly offset cost headwinds through price changes.

Boss Jonathan Myers said the environment was ‘challenging’ with costs continuing to escalate. The shares were up 3.7 per cent, or 7.5p, at 208p.

Hargreaves Lansdown analyst Susannah Streeter said there was ‘little sign of the inflationary pressure cooker cooling off just yet’.

British Airways owner IAG ascended 3.8 per cent, or 5.12p, to 140.3p after the airline offered a £1,000 welcome bonus to attract cabin crew from rivals to avoid a staff shortage over the summer.

It expected revenues in the year to grow by between 45.5 per cent and 47 per cent, up from previous forecasts of 44.5 per cent-46.5 per cent growth.

Meanwhile, property investor McKay Securities slipped 4 per cent, or 12p, to 285p after Canadian private equity firm Slate dropped out of a bidding war on Tuesday.