Housebuilders took a battering as fresh fears over rising interest rates cast a bleak outlook over the sector.

The respite brought by the Bank of England’s dramatic intervention in gilt markets on Wednesday came to an abrupt end as attention turned to the outlook for the housing market.

The sell-off was all the more brutal at Barratt and Rightmove as their shares traded ex-dividend, meaning only those who bought the stock before this point can receive the upcoming dividend.

The prospect of further hefty interest rate hikes has fuelled fears of a downturn in the housing market as mortgage costs rise.

This could hit demand for new homes and result in lower prices, hurting the profits of developers.

‘The risk is still looming that if mortgage rates become increasingly unaffordable, then there could be a severe correction in the housing market, causing a fresh maelstrom of problems for struggling homeowners and a worsening outlook for housebuilders,’ said Hargreaves Lansdown analyst Susannah Streeter.

The losses were echoed on stock markets around the world with Germany’s Dax index down 1.71 per cent and the Cac in France by 1.53 per cent while on Wall Street, the Dow Jones fell 1.54 per cent. 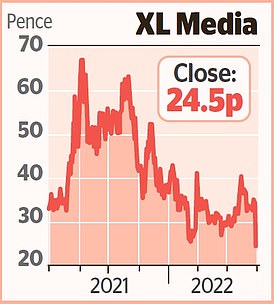 A stark warning on profits spooked investors in XL Media, the digital marketing firm that makes most of its money from US sports assets.

Profit for the year is expected remain flat compared with the previous 12 months, before returning to growth in 2023.

This is largely a result of it altering the content of its personal finance business to comply with Google guidelines.

Back in London, Synthomer suffered its worst day on the stock market.

The polymer maker, which sells the raw materials used to make medical gloves, said its profit for the year is expected to be 10-15 per cent below previous expectations amid a global slowdown in orders as companies use supplies stockpiled during the pandemic.

There are also concerns over its balance sheet and whether a rights issue will be needed to raise more funds. It fell 34.8 per cent, or 47.95p, to 90.05p.

Capricorn Energy has ditched a merger with fellow FTSE 250 firm Tullow Oil in favour of forming a new group with Israel’s NewMed.

Capricorn shareholders, who will pocket a special dividend of £1.72 per share, will own 10.3 per cent of the company with the rest under the control of NewMed investors.

IHG reassured the market that a cyber-attack on September 6 failed to access guests’ personal data. The owner of Holiday Inn and Crowne Plaza said its booking websites and mobile app were up and running again the next day. It sank 2.5 per cent, or 1.27p, to 48.99p.

Avon Protection landed its first order, worth £38.6million from the US Army under its next-generation helmet contract. The headgear and gas mask maker said deliveries should begin next year. It climbed 6 per cent, or 61p, to 1081p.

Two Polymetal directors have stepped down. Riccardo Orcel leaves the London-listed Russian gold producer only months after joining as chairman while Giacomo Baizini’s exit comes after four years. It fell 2.5 per cent, or 5p, to 195p.