Shares in Hilton Food Group endured one of their worst days on the stock market after the company warned ‘unprecedented’ cost increases had hit profits.

The FTSE 250 meat and fish packer, which operates across Europe, Australia and New Zealand, said it struggled to curb the rising costs hurting its UK seafood business.

As a result, its profit for the year would be below expectations.

But Hilton Foods added it was well-placed for 2023 given its ‘strong’ financial position.

But analysts seemed less than impressed, with RBC cutting the target price to 600p from 700p.

Hilton’s biggest fall came in September when shares tumbled 28 per cent after a profit warning for the year.

She will receive the same package as Rogers, 54, who earned £4.7million in pay including bonuses and share awards last year. 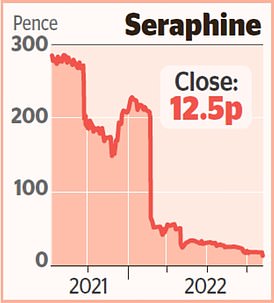 The group, whose clothes have been worn by the Princess of Wales, said it faced a ‘challenging’ summer.

Revenue inched down to about £19million in the 26 weeks to October against £20.8million a year earlier.

The group made a loss of £1.5million but expects to return to profit in the second half.

Rogers is believed to be in line for a new top job.

DCC swung into reverse after its profit fell short of market expectations.

The Irish conglomerate saw its profit rise 13 per cent to £221.2million in the six months to September.

But Jefferies said this was 2 per cent below the consensus among analysts amid a decline in DCC’s healthcare business.

The policy, to be launched under the Churchill brand, will offer cover for the policyholder’s vehicle and third-party damage, but strip out many extras.

Details of the new basic cover came as Direct Line said total motor premiums tumbled 8.9 per cent to £1.1billion in the first nine months of 2022 after it raised prices following a surge in claim costs.

Also in the second tier, Hammerson was handed a much-needed boost in its post-pandemic recovery as shoppers returned to stores.

The owner of shopping centres such as the Bullring in Birmingham said footfall across the UK, Ireland and France was now between 90 per cent and 95 per cent of the level seen before the pandemic struck.

Engineering group IMI rose 5.1 per cent, or 67p, to 1387p after it agreed to snap up the smart temperature controls manufacturer Heatmiser in a deal that could reach £118million.

An Esports firm backed by David Beckham is to offer courses to help young people break into the industry. Guild Esports revealed a tie-up with post-16 education provider SCL for BTEC diplomas.