Persimmon shares dropped to a two-year low as it was hit by planning delays and the rising cost of building homes.

Chief executive Dean Finch said the industry was facing ‘significant on-going challenges’, flagging that the group had experienced delays in the planning system as well as ‘disruption’ in its supply chains and shortages of materials and labour.

Housebuilder Persimmon sank 5% after it said it sold 6,652 new homes in the six months to the end of June, down from 7,406 in the same period a year ago

But Finch said half-year profits were still expected to be ‘modestly above’ its expectations as a result of ‘strong demand’ and rising property prices. However, the outlook failed to prevent the slide in the share price.

Builders like Persimmon cashed in during the pandemic as a stamp duty holiday introduced by then-Chancellor Rishi Sunak as well as higher demand for spacious homes during lockdown caused demand to soar, sparking a surge in prices.

However, there are worries momentum in the market could stall as rising interest rates and the cost-of-living crisis squeeze household savings.

‘Housebuilders have had to work hard to stay ahead of inflationary pressures and Persimmon’s latest update suggests these are finally catching up with the industry in a material way,’ said AJ Bell investment director Russ Mould.

He added that while Persimmon’s strong balance sheet was allowing it to buy more land and pay dividends to investors, the hit to its profits could be ‘significant’ if the housing market began to cool. 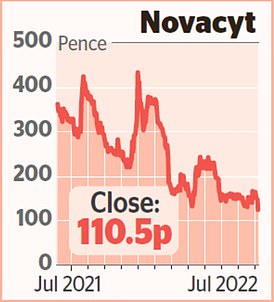 Novacyt shares plunged to their lowest level in over two years after it warned of a sharp downturn in business.

The maker of Covid-19 tests reported revenues for the six months to the end of June were £16.5million, much lower than the £52.2million delivered the previous year.

If the fall in demand for Covid-19 products continued, Novacyt predicted its revenues for the full year would be £25million, much lower than previous forecasts of £35million to £45million.

‘Runaway inflation is still viewed as the demon threatening economic stability around the world, and although sharp slowdowns and recessions could be a consequence, the attitude that it’s better to go in hard and fast now to prevent a further price spiral is largely being welcomed,’ said Hargreaves Lansdown analyst Susannah Streeter.

Iron ore miner Ferrexpo reported production had dropped by more than a quarter in the three months to the end of June due to the ongoing war in Ukraine.

Sales in the first half of 2022 also declined by 21 per cent to 4.4m tonnes due to logistical disruptions.

But the shares rose 1.8 per cent, or 2.2p, to 122.4p as investors seemed cheered by the fact output had continued despite the conflict.

Mediclinic jumped 7.7 per cent, or 34p, to 476.2p after it backed an increased takeover offer from a consortium backed by its largest shareholder Remgro, which has offered 504p per share, valuing the group at £3.7billion.