Halfords shares fell to their lowest level in nearly two years as it became the latest firm to warn that surging inflation would present ‘challenges’ for its business.

The bike and car services retailer sank 27.7 per cent, or 54.7p, to 142.8p after its boss Graham Stapleton said price rises and waning consumer confidence would ‘naturally present short-term challenges’.

Halfords warned the cost of living crisis meant it was facing ‘reduced demand’, particularly for more costly items that were not essential, while ‘significant cost inflation’ was also expected to hamper its performance.

As a result, it expected profits for its financial year would be lower at between £65million and £75million.

The bleak forecast overshadowed results for the year to April, which saw Halfords report a profit of £96.6million, up 50 per cent year-on-year, as its sales were boosted by growing market share for its motoring business and auto centres, which offer MOTs, tyre replacements and vehicle maintenance.

However, the group’s cycling business suffered a 25 per cent drop in sales year-on-year as the end of lockdown restrictions put an end to the Covid-inspired cycling boom.

The results failed to create confidence among analysts, with broker Liberum downgrading the stock to ‘hold’ from ‘buy’ and slashing their target price to 160p from 410p.

Liberum said Halfords’ outlook was ‘poor’ and that as a result, they saw ‘limited’ catalysts for the share price in the short term.

Concerns over the global economy and inflation continued to linger after the Bank of England raised interest rates by 25 basis points to 1.25 per cent, the highest level since 2009, and predicted UK inflation would be over 11 per cent in October, higher than previously forecast. 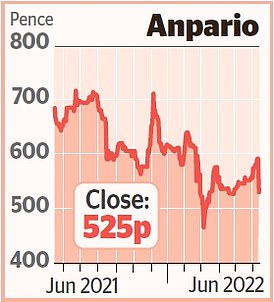 The firm, which makes nutritional additives for animal feed, experienced ‘significant raw material price inflation’ in the five months to the end of May alongside ‘historically high’ logistics costs.

The group added that it was passing on the effects of inflation to customers through price rises.

It followed more drastic action by the Federal Reserve, which hiked interest rates by 75 basis points, the sharpest increase since 1994, to counter soaring US inflation.

She added that worries about inflation will ‘ratchet up’ given the eye-watering rate of price rises, which could push the central bank to hike rates more steeply if ‘red hot prices’ showed no signs of cooling.

Safety equipment firm Halma dropped 5.7 per cent, or 113.5p, to 1876.5p after its long-serving boss Andrew Williams decided to retire after 18 years in charge. He will be succeeded by the group’s chief financial officer Marc Ronchetti.

Williams’ departure overshadowed a strong set of results, with a record profit of £316million for the year to the end of March, up 14 per cent year-on-year. Revenues also rose 16 per cent to a record £1.5billion.