The green energy firm was seen as a trailblazer when it listed in London in 2004, becoming the first ever hydrogen company to take the step.

Profit warning: ITM Power was seen as a trailblazer when it listed in London in 2004, becoming the first ever hydrogen company to take the step

But the past two years haven’t been kind and yesterday investors sold the stock afresh as chief executive Dennis Schulz said expected earnings for the current year would not be met – the third warning since June. Shares slumped 12 per cent, or 12.5p, to 91.3p.

The company makes electrolysers that separate hydrogen from water, a key technology in the green revolution.

However, manufacturing problems at its factory in Sheffield mean it has failed to deliver to major customers, including German gas giant Linde and chemical firm Yara, who together are building a green hydrogen plant in Norway.

Analysts say the problem has been ITM’s transition from research and development to full scale manufacturing.

Nick Walker at Peel Hunt said: ‘ITM knows how to make the products but now it has to deliver them. These are two very different skill sets and require the right people, machinery and set-up.

‘Investors are fast running out of patience but more worryingly so are the customers. If they go elsewhere, then it’s trouble.’

Schulz joined from Linde in December but he won’t have long to turn the problems around.

He said: ‘For the company to develop from a research and development entity to a mature delivery organisation, we require firmer foundations.’ 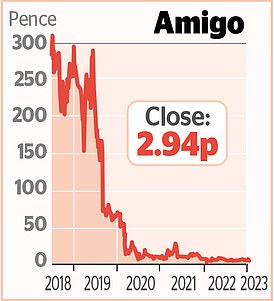 Amigo shares fell nearly 25 per cent as it struggles to convince investors to help pay what it owes to customers missold loans they could not afford.

The high-interest lender said it has not managed to find a so-called ‘cornerstone’ investor to help it raise £15million for customers, blaming the ‘economic backdrop’.

Amigo has been on the ropes for several years after receiving an onslaught of complaints over how it sold loans to customers.

The stock is followed closely by retail investors but backers also include JCB grandee Lord Bamford and financier Peter Hargreaves, who hold stakes worth 7 per cent and 4.5 per cent respectively.

Investors remained on tenterhooks to see if the FTSE 100 index would break its record closing high of 7877.45.

But with the US markets closed for Martin Luther King Day, the index lacked impetus and ended the session gaining 0.2 per cent, or 16 points, to 7860.07.

Miners and oilers were also weighing progress down, as Brent Crude and copper and zinc on the London Metal Exchange all fell.

Brokers have watched Ascential (up 7.9 per cent, or 16.4p, to 224p) closely ever since it told investors in April it was looking to demerge.

The idea is to create more value for shareholders by listing its digital operations in the US where tech businesses have had better valuations.

The rest of the business – such as the Cannes Lions and World Retail Congress events – would remain listed in London.

The plans were never given formal approval by the board but investors expect more details at the full-year results next month.

The fast fashion retailer is back in the City’s good books after last week’s trading update buoyed investors.

And news that mini skirt sales have risen by more than a third in the past four months also set pulses racing.