Shares in fracking companies soared after the Prime Minister lifted the ban on drilling for shale gas onshore.

In her second day in office, Liz Truss lifted a moratorium which came into force in November 2019 amid fears fracking caused minor earthquakes or tremors.

Companies can now apply for planning permission to frack what are thought to be huge reserves of shale gas under the UK.

Green light: Workers at the Cuadrilla fracking site in Lancashire.  Liz Truss has lifted a drilling ban which came into force in 2019 amid fears fracking caused minor earthquakes or tremors

Investors have anticipated the move as shares in AIM-listed Egdon have more than doubled since the start of August.

Managing director Mark Abbott praised the Prime Minister’s decision as the ‘logical and pragmatic response to the new geopolitical reality’.

‘With Egdon’s material shale-gas position, we look forward to working positively with government and local communities to deliver this nationally important resource in a timely fashion,’ he said

IGas Energy, meanwhile, which was founded in 2003, said the UK’s ‘world-class shale gas resource’ is now a ‘strategic national asset’ given the ongoing energy crisis.

Boss Stephen Bowler said the decision would improve the UK’s energy security, to increase tax take and provide a means to level up the economy.’

Charles McAllister, director of UK Onshore Oil and Gas, which represents the onshore oil and gas industry, also hailed the Government for its ‘sensible foresight’ in lifting the moratorium as shares in Egdon surged 16 per cent, or 1.2p to 8.7p and IGas gained 12.1 per cent, or 11.5p, to 106.5p. 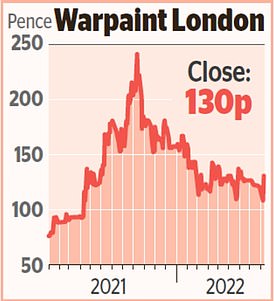 Warpaint London shares surged on the back of a positive trading update.

Ahead of half-year results later this month, the AIM-listed skincare and make-up firm expects to beat market expectations for the year following ‘strong trading’.

Warpaint, which sells products to the likes of Boots, Asda and Matalan, expects sales across the 12 months to be at least £61million and profit of more than £9million.

Energean shares rose after the oil and gas group hiked its annual revenue and profit targets.

Rising gas prices in Egypt as well as Israel, where its Karish project is due to start production within weeks, has helped Energean report a 65 per cent rise in revenue to £296million ($339million) in the six months to the end of June.

Despite the strong results Energean, which is valued at around £2.2billion, was hit with a one-off windfall tax in Italy.

The group said it has already paid 40 per cent of the £25.5million charge and expects to stump up the rest by the end of November.

Energean hailed its ‘strong cash flows’ after declaring a first quarterly dividend of 30 US cents per share.

On a bad day for retail investors, Primark owner AB Foods tumbled 7.6 per cent, or 110p, to 1345p after it warned on profits.

Marks & Spencer faced further pressure on its shares, which tumbled to the lowest level since November 2020. Following JP Morgan earlier this week, analysts at RBC cut the stock’s target price to 140p from 160p.

Healthcare group DCC sealed the largest acquisition in the company’s history – but shares still dropped 0.3 per cent, or 12p, to 4790p

The group snapped up the medical devices business Medi-Globe Technologies – which employs around 600 staff – for £213million, with the deal expected to be completed in the final quarter of this year.