The London stock market started the new year with a bang as fears about the severity of the Omicron variant began to subside.

The FTSE 100 hit new post-pandemic highs after investors took their cue from signs that, although cases are surging, the strain is milder than its predecessors.

Airline stocks took off as traders bet that harsh restrictions are less likely to be brought in and that people will still be itching to visit loved ones or go on holiday.

New high: Airline stocks took off as traders bet that harsh restrictions are less likely to be brought in and that people will still be itching to visit loved ones or go on holiday

Russ Mould, investment director at AJ Bell, said: ‘There is no sign of an extended new year hangover for the UK markets.

‘The gains for oil firms, airlines and hotel, pub and restaurant operators reflect diminished investor concern about the Omicron variant of Covid-19.’ Wizz Air was the top riser in the FTSE 350 after stellar December passenger figures, even though Omicron put many off travelling. 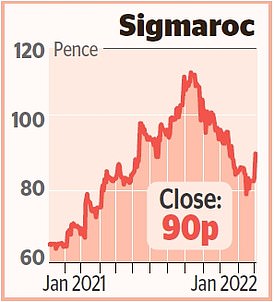 A total of eight quarries – and two processing sites – have been bought, spread across the South West, Oxfordshire and Lincolnshire.

The Hungarian budget airline, which does most of its business flying into eastern Europe, flew 2.6m travellers last month with its planes 75 per cent full.

This was around 80pc of the 3.3m it carried in December 2019. Wizz reports its passenger numbers as booked seats, rather than the total number of people who actually travelled – but it indicates that demand is picking up. Shares soared 12.2 per cent, or 512p, to 4700p.

British Airways-owner IAG was hot on its heels, rising 11.3 per cent, or 16.04p to 158.82p, as analysts at Citi said long-haul airlines are likely to outperform short-haul carriers.

IAG and its peers are more likely to benefit from the recovery in corporate travel and people wanting to visit friends and family, Citi said.

Other travel and leisure stocks were also on the up as hopes grew that the economy will continue to recover.

Despite the optimistic outlook, Dim T and Wildwood-owner Tasty revealed the damage done to its festive trading in the wake of Plan B restrictions.

The AIM-listed group, which has 54 pizza joints and Asian fusion eateries, said trade was ‘considerably weaker than anticipated’ after advice to work from home kicked in on December 13 and deterred festive bookings.

The pair were some of the biggest stock market gainers in 2020 after they mobilised rapidly to battle the pandemic.

Elsewhere, tech-focused government contractor Capita capped off another sale in its bid to raise £700million from disposals in 2021 and the first half of 2022.

Shares rose 5 per cent , or 1.84p, to 38.34p after the £62million deal to sell its Secure Solutions and Services business to NEC Software Solutions UK.

The division provides software to the justice and emergency services sectors.

By the end of last year the group, which runs everything from collection of the BBC licence fee to operating Government and council call centres, had agreed deals worth at least £643million.