MARKET REPORT: Footsie rallies to its highest level for nearly five years as reopening of the Chinese economy pushes up commodity prices

The rally among the blue chips was helped by mining and oil stocks as the further reopening of the Chinese economy pushed up commodity prices.

Michael Hewson, chief market analyst at CMC Markets UK, said: ‘The FTSE 100 has pushed up to its best level since August 2018 driven by resilience in commodity prices after China relaxed Covid travel restrictions, helping to push the likes of Glencore and Antofagasta higher as copper prices push to six-month highs.’

Nanoco shares plunged 24.4 per cent or 13.6p, to 42.2p after it warned its settlement cost with Samsung would be lower than hoped.

Last week the pair avoided a courtroom showdown and were granted 30 days to work out terms of the no-fault agreement, which could be worth as much as $500million (£415million). 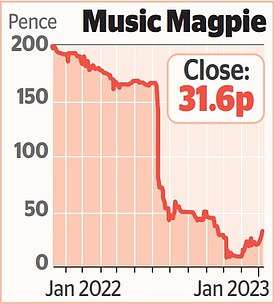 Music Magpie strengthened its foothold in the US after its American brand signed a deal with the biggest retailer in the world.

The group, which allows consumers to buy and sell second-hand CDs and electronics, said refurbished discs sold by its business Decluttr could be bought by Walmart.com’s 120m monthly website visitors.

But Nanoco yesterday warned that ‘further negotiations’ were required and uncertainty remained over what a final agreement would look like.

‘The gross settlement value should be expected to be towards the lower end of the range of expectations for a successful jury trial outcome as previously guided by the company,’ a company spokesman added.

Investors in telecoms stocks had much to digest at the start of the week. Vodafone agreed to sell its Hungarian business for £1.5billion as part of efforts to reduce debt.

It will be bought by the local technology company 4iG and the Hungarian state.

Voda finance boss Margherita Della Valle, who stepped up to become interim chief executive while the search to replace Nick Read continues, said the ‘combined entity will increase competition and accelerate investment in the ongoing digitalisation of Hungary’.

The company’s Nigerian subsidiary is hoping that the deal with the telecoms regulator in the country will enable it to ‘provide reliable and affordable services to local communities’.

Tortilla Mexican Grill produced a tasty set of results as the restaurant group brushed aside the impact of train strikes and poor weather. Revenue shot up 20 per cent to £57.7million for the year to January 1.

Tortilla hailed the positive progress of the sites it opened during the year, including ones in Durham and Canterbury. Shares soared 16.1 per cent, or 14p, to 101p.