The court ruled that FanDuel – the American sports betting company owned by Flutter which is at the centre of the row with Fox – was worth £19.2billion.

This means Fox would need to pay £3.6billion if it decides to exercise its option to take an 18.6 per cent stake in FanDuel. That is far more than Fox had hoped to pay.

A New York court ruled that FanDuel – the American sports betting company owned by Flutter which is at the centre of a legal row with Fox – was worth £19.2bn

Fox launched a legal challenge in April last year over the terms of how it could take up a stake in FanDuel.

Flutter boss Peter Jackson said the ruling ‘vindicates the confidence we had in our position on this matter and provides certainty on what it would cost Fox to buy into this business, should they wish to do so’.

Mike Ashley’s Frasers Group rose 5.8 per cent, or 38.5p, to 706p after it launched a share buyback programme worth up to £70million. 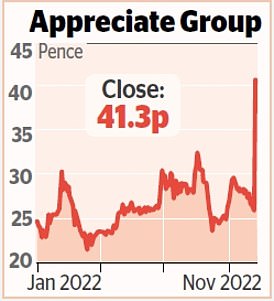 Shares in Appreciate surged after it agreed to be scooped up by the payment service firm PayPoint.

The deal is for 44p a share – valuing the Liverpool-based group, which sells products such as Love2shop gift cards and vouchers, at around £83million.

PayPoint said this is a near-70 per cent premium on the closing price of Appreciate shares on Friday.

Energean rose 1.9 per cent, or 29p, to 1569p after it said it had discovered 13bn cubic metres of gas following an exploration of the Zeus well, off the coast of Israel. Peel Hunt raised its target price for the exploration and production firm to 2000p from 1800p.

Virgin Wines inched up 1.7 per cent, or 1p, to 60p following a positive broker note.

Liberum said the wine retailer was ‘a corker of a stock’ and hailed the group for its ‘disciplined approach to growth’ and success in retaining new customers during the pandemic.

National World has ploughed £1.1million into the social media company The News Movement, which will produce news content for its audiences on sites such as Tik Tok, Instagram and Twitter.

It comes just days after newspaper tycoon David Montgomery said he was considering a bid through his group National World for the Daily Express and Daily Mirror owner Reach.

Elsewhere, Marwyn Acquisition Company (MAC) surged 12.9 per cent, or 0.23p, to 1.98p after the private equity group appointed the former chairman of Asos.

MAC is a listed acquisition company which was floated on the market by Marwyn, the top shareholder of the investment firm AdvancedAdvT, which unsuccessfully tried to take over M&C Saatchi (up 2.6 per cent, or 3.3p, to 132.3p) with tech entrepreneur Vin Murria.

Legal group DWF rose 2.6 per cent, or 1.8p, to 71p following its takeover of the Canadian law firm Whitelaw Twining.

The deal, which is worth up to £27.7million, is expected to be completed by the end of the year.

DWF chief Sir Nigel Knowles said: ‘We are delighted to be enhancing our offering in the Canadian legal market.

‘Whitelaw Twining represents a high quality opportunity for our clients. It also allows us to expand our claims and adjusting presence in Canada and wider Connected Services and Mindcrest capabilities in North America.’