DFS hit a two-year low after its finance boss was poached by a rival retailer.

Shares in the sofa seller slipped 0.7 per cent, or 1p, to 152p after announcing its chief financial officer Mike Schmidt will leave after three years.

He takes on the same role at B&M and starts at the FTSE 100 firm before January 3 next year.

Shares in sofa seller DFS slipped 0.7 per cent, or 1p, to 152p after announcing its chief financial officer Mike Schmidt will leave after three years

Schmidt will remain at DFS to oversee its full-year results before departing. The company is already searching for a successor.

He succeeds Alex Russo at B&M, who becomes chief executive of the discount chain.

Russo takes over from long-serving B&M chief Simon Arora, who announced earlier this year that he was retiring after 17 years in charge. B&M shares were down 1.8 per cent, or 6.5p, to 359.1p.

DFS attempted to offset the sour note of Schmidt’s departure, noting that it expected full-year profits to be ‘in the upper half’ of its forecasts. But this failed to prevent a slide in the share price.

It wasn’t the only executive change happening, with supermarket Sainsbury’s (up 1.1 per cent, or 2.2p, to 210.6p) announcing finance chief Kevin O’Byrne will retire from the group next March.

He will be succeeded by Blathnaid Bergin, director of the commercial and retail finance division. She will become the FTSE 100’s 21st female finance boss.

Market sentiment was hit by a bleak outlook on the economy from the Bank of England, which warned that Britain’s major banks will need to beef up their cash reserves as it predicted household budgets would become more stretched as the cost of living crisis worsened. 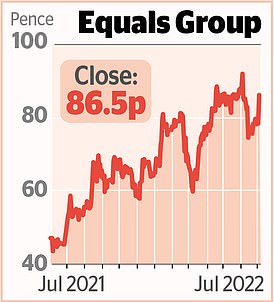 The payments company reported revenues in the six months to the end of June surged 84 per cent year-on-year to £31.3million.

Profits rose 47 per cent to £15million despite a decline in margins to 48 per cent from 51 per cent in the second half of last year.

The shares climbed 10.2 per cent, or 8p, to 86.5p as Equals Group predicted its earnings for the year would now be ‘ahead of current market expectations’.

Mining firms also weighed on the FTSE 100 amid a drop in iron ore prices as factories cut back steel production despite reports Chinese authorities are planning a £62billion infrastructure spending package to revive the country’s flagging economy.

Rio Tinto was also on the back foot, sliding 4 per cent, or 194p, to 4641p after it was forced to halt work at the long-stalled Simandou iron ore project in Guinea.

The country’s military government ordered a stoppage at the site on Monday morning amid a row over funding transport infrastructure at the project.

Delivery group Royal Mail edged up 0.5 per cent, or 1.3p, to 269.1p despite union leaders announcing that managers at the firm will go on strike later this month.

Around 2,400 employees will walk off the job from July 20 to 22 as a result of a dispute over pay and job cuts.

Waste management group Biffa has extended its deadline for a takeover offer as it continued talks with private equity firm Energy Capital.

Animal drug maker Dechra Pharma was the biggest blue-chip riser, gaining 5.3 per cent, or 182p, to 3616p after receiving an upgrade from analysts at RBC.

The investment bank upped their rating on the stock to ‘outperform’ from ‘sector perform’ saying Dechra was ‘benefiting from strong market trends’ and was resilient to recession.

Despite this, RBC trimmed its price target on the shares to 4200p from 5300p after a recent drop.