Shares in Ascential hit a six-month high as the events giant outlined its proposals to break up the business.

The FTSE 250 company behind the Cannes Lions advertising festival soared 26 per cent, or 54p, to 262p – a level not seen since July last year – after it said it will seek shareholder approval to float its digital operations in the US, sell a brand and keep the rest of the business listed in London.

Ascential first aired plans to separate in April as a way to create more value for shareholders.

Break-up plan: Ascential, the company behind the Cannes Lions advertising festival aid it will seek shareholder approval to float its digital operations in the US and sell one of its brands

The case for breaking up its business has been strengthened by ‘double-digit revenue growth’ last year.

In a positive end to its financial year, Ascential said revenue and profit for 2022 were likely to have beaten market expectations.

As part of the proposals, Ascential’s US-focused digital commerce arm would float in New York while the events business that includes Cannes Lions and Money 20/20 conferences would stay within the London-listed company.

And it wants to sell its trend forecasting firm WGSN.

Analysts at Peel Hunt said: ‘We have long stressed that the underlying assets are worth more than the combined group and thus management is now taking steps to maximum the value.’

Insurance giant Aviva was among the blue-chip winners even as it warned that the cold snap in December will cost £50million in claims from customers hit by burst water pipes and the like. Despite the cost, Aviva said that it would still pay a dividend. 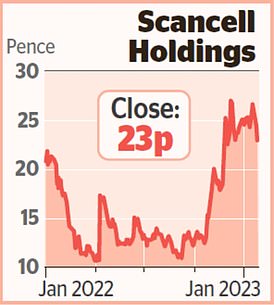 Scancell cashed in on a deal to develop and commercialise an antibody to treat diseases such as cancer.

The clinical stage biotech group signed a licence agreement in October with the Danish company Genmab – being paid £5.3million a month later.

But the cost of investing in research and development meant it made a loss of £3.2million in the six months to October.

It had £24million of cash at the end of October, down from £28.7million in April.

This was in sharp contrast to rival Direct Line, whose shares fell 23 per cent in a single day this month after it axed its dividend, saying the cold snap would cost £90million.

Experian fell after Credit Suisse downgraded its rating to ‘neutral’ from ‘outperform’ and cut the target price to 2900p from 3250p.Shares in the credit scorer sank 3.7 per cent, or 110p, to 2852p.

Mexican miner Fresnillo warned its production costs were likely to have increased by around 20 per cent in the second half of 2022.

Silver production also slid 3 per cent in the final three months of 2022 while gold output increased during the period.

Trading platform CMC Markets reassured investors that business was improving following the turmoil last year. Income slumped towards the end of 2022 but has since ‘recovered strongly’.

Meanwhile Keywords Studios has bumped up its full-year forecasts on the back of soaring demand for increasingly complex video games.

Over at Pendragon, the car dealer warned there would still be some ‘constraints’ with the supply of new and used vehicles this year.

This came even though its sales of new cars were 4 per cent higher in the final three months of 2022 compared with a year earlier.

Pendragon said its profit for 2022 should be around £57million – up on the £54million analysts expected but still far short of the £83million made 12 months earlier.