The mood was not helped as official figures showed the UK economy shrank by 0.3 per cent in August.

Recession fears: Lloyds sank 5.8%, while Barclays fell 3.2% and NatWest was down 4.2% amid turmoil on the financial markets

Shore Capital analyst Gary Greenwood warned banks are being hit by a cocktail of woes, including the Pensions crisis stemming from liability-driven investments (LDIs).

He said: ‘The recent disruption of government bond markets due to the LDI issue has also raised concerns around financial stability.

The market is concerned about what this may mean for bad debts and so the solvency of banks.

Concerns are massively overdone and banks are entering this downturn in very good shape following years of regulatory tightening and a period of relatively muted loan book growth.’

Energy stocks fell amid reports of an imminent windfall tax capping the money made by wind, solar and nuclear producers. 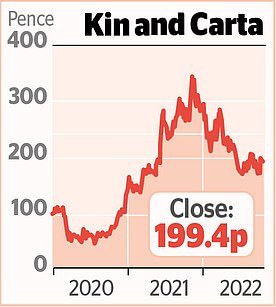 The tech consultancy’s revenue for the 12 months to the end of July, at £190.3million, was 37 per cent higher than a year earlier.

It hailed the three takeovers it completed even though this widened losses for the year to £15.9million from £5.8million.

A record £81million contract with a financial services client was sealed, and it has revised its target of doubling revenue by 2024 rather than 2025.

Drax boss Will Gardiner said it would work with the Government and industry to iron out proposals for a temporary cap on revenue.

Fracking shares also took a hit as MPs look at ways to amend the Government’s plan to lift the ban on drilling for shale gas onshore.

Deutsche Bank highlighted jitters towards gambling stocks, cutting the target price of Entain, the owner of Ladbrokes and Coral. Online betting group 888 was cut to 160p from 230p.

Chemicals group Synthomer fell 7.8 per cent, or 7.55p, to 88.85p as it paid the price for suspending dividends until the end of next year.

Hostelworld gave its investors a reason to cheer as the online travel agent expects to swing from a loss to making profit for the year. Shares inched up 0.1 per cent, or 0.1p, to 76p.

Mike Ashley took another stride in expanding his empire as the Sports Direct owner Frasers Group disclosed a 4.5 per cent stake in N Brown.

Marston’s tumbled 3.9 per cent, or 1.48p, to 36.5p. Liberum issued a ‘buy’ rating as the brewer has ‘deep value’ even in the face of rising economic pressures while JP Morgan reiterated a ‘neutral’ recommendation and trimmed the target price to 54p from 59p.

Deepverge hit a record low, saying it was struggling to raise enough to repay a major loan and shore up its balance sheet.

The company, which makes human-like skin for drug firms to test products on, is due to make its first loan repayment on Sunday. Shares tumbled 44.9 per cent, or 2.52p, to 3.1p.