MARKET REPORT: Easyjet in descent after warning in may need to cut fares to pull in the passengers over winter

EasyJet shares lost altitude after a broker warned that the airline may need to cut fares to draw in passengers over the winter.

The budget carrier’s stock dropped 1.5 per cent, or 9.2p, to 588.8p after analysts at Paris-based Kepler Cheuvreux said there was a risk Easyjet would need to ‘incentivise demand with fare discounts’ as increasing numbers of Covid-19 infections in some countries made passengers more hesitant to jet off for a winter break.

This was a particular concern given what analysts said was a ‘fragile’ environment for passenger bookings despite ‘encouraging’ numbers for the Christmas holidays so far.

Nosedive: Easyjet’s stock dropped 1.5% after analysts at Paris-based Kepler Cheuvreux said there was a risk Easyjet would need to ‘incentivise demand with fare discounts’

A partial lockdown in the Netherlands on Saturday as well as ‘intensifying’ discussions over fresh restrictions in Germany were both noted as potential risks to passenger traffic heading into the festive period.

Even if lockdowns were not to be implemented, Kepler said, there was a danger that ‘the increasing number of infections and the ongoing discussions in the press about Covid risks will lead some people to be more cautious about making travel plans until the end of the year’. 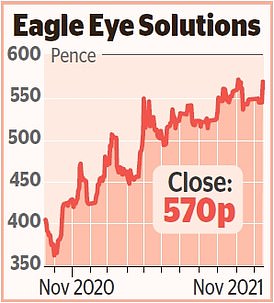 Eagle Eye Solutions, a marketing technology firm, flew higher after it unveiled a partnership with Asda to develop a loyalty programme for the supermarket group.

The scheme is powered by Eagle Eye’s AIR platform and also includes a phone app for customers to access their rewards.

Following a successful trial among Asda staff, the scheme has been rolled out across 16 stores in West Yorkshire and the West Midlands.

The broker also flagged ‘increasing political opposition to low-cost carriers in many of Easyjet’s main markets post-Covid’, particularly after governments shelled out millions in support for national carriers during the pandemic.

The blue-chip index was weighed down by several miners amid worries a slowdown in the Chinese property market could hit demand for steel and other metals used in construction.

Computer antivirus software group Avast surged 7.1 per cent, or 39.4p, to 598.2p after its merger with rival Norton Life Lock cleared a regulatory hurdle in the US.

Mid-cap engineer IMI snapped up US-based Adaptas Solutions, a maker of lab equipment, for £202million ($271million). The deal is expected to immediately boost IMI’s earnings. But it made no impact on the shares yesterday as they crept up just 0.1 per cent, or 1p, to 1793p.

Workplace software firm Kainos posted a 3 per cent year-on-year rise in pre-tax profits to £24.8million in the six months to the end of September as revenues boomed 33 per cent to £142.3million, helped by high demand from the healthcare sector during the pandemic.

But the shares tumbled 9.3 per cent, or 191p, to 1861p as investors appeared to think the profit rise did not reflect the double-digit jump in revenues over the period.

Bargain retailer B&M slipped 2.4 per cent, or 14.4p, to 585p after the stock was hit by downgrades from both Goldman Sachs and RBC.

Goldman knocked its rating down to ‘sell’ from ‘neutral’ and cut its target price to 580p from 620p, predicting flat earnings for the next three years due to supply chain disruption and higher costs.

RBC lowered its rating to ‘underperform’ from ‘sector perform’ and trimmed its target to 575p from 600p.