Shares in casino and bingo firm Rank plunged after it warned of rising costs and slow recovery.

The FTSE 250 group, which owns the Grosvenor Casinos chain, lamented the lack of wealthy foreign customers returning to its London venues following Covid.

The turnout in its Grosvenor casinos had improved since April, but the firm said it has been ‘considerably weaker than expected’.

Rank, which also owns Mecca Bingo, said the performance across its other businesses has been broadly in line with expectations.

But this was not enough to offset fears over the impact of inflation and a slowdown in trading.

As such, Rank said it expects profit for the year to the end of June to be around £40million, down from a previous projection of between £47million and £55million.

This was the second time the company has lowered its profit forecast this year.

In April, Rank said it expected profits to range between £47million and £55million, down from a previous forecast of £55million to £65million.

Shore Capital analyst Greg Johnson said the ‘crux will be a return in higher-spending international customers over the summer, and we now see a pick-up from July’.

He cut his forecast for Rank’s profits for the next financial year by £8million to £62million but said Shore ‘remain buyers of the stock’. 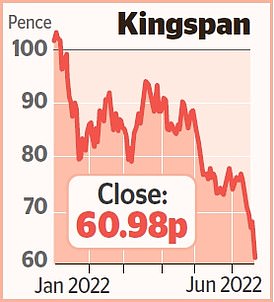 Shares in insulation specialist Kingspan sank after a sharp fall in demand.

The company, which has 15,000 staff and 156 manufacturing sites in 70 countries, said it has seen the ‘mood deteriorate over the last two months’ with orders down ‘significantly’ in May and June.

Demand for its insulated panels used in walls and ceilings – by far its largest product – has been particularly hard hit.

It’s been a dismal month for the London stock market.

Fellow North Sea oil and gas producer Harbour Energy also rose, by 2.7 per cent, or 9.3p, to 356.3p, after boss Linda Cook wrote to Chancellor Rishi Sunak and called on him to revise the proposals for the Energy Profits Levy.

Blue-chip mining giant Glencore climbed 2.5 per cent, or 11.55p, to 472.75p following a warm show of support from brokers after Friday’s trading update on coal and trading.

Deutsche Bank hailed the ‘much needed’ boost and said it points to half-year profits at the coal business of around £7.4billion.

This is ahead of earlier expectations of £5.4billion. Glencore also said it was on target for its trading business to make profits of £2.6billion in the first half, well ahead of expectations.

Barclays and JP Morgan both said Glencore should be a ‘top pick’ for investors.

Housebuilders weighed heavily on the top flight amid signs the red hot market is cooling.

The firm said higher borrowing costs and more homes coming on to the market will see the rate of price growth ease to 5 per cent by the end of the year.