Mining stocks took a beating as the fragile state of the Chinese economy sparked fears of a drop in commodity demand.

Covid-19 restrictions have been reintroduced in several Chinese cities including the tech hub Shenzhen in the south as well as Chengdu in the west and Tianjin in the north, fuelling concerns the country will take longer to emerge from its recent slump.

‘With millions of citizens facing strict curbs on movement it’s feared China’s fragile recovery will go into reverse and August’s dip in factory activity won’t be a blip but instead will linger for much longer,’ said Hargreaves Lansdown analysts Susannah Streeter.

China is one of the largest importers of raw materials such as iron ore and copper, meaning any slowdown in the country’s economy threatens to severely hamper global demand.

The cost-of-living squeeze continues to hang heavy over the market after the Resolution Foundation think-tank warned 3m people will be forced into absolute poverty as the UK faced the deepest living standards squeeze in a century.

The prospect of a massive hit to consumer spending sent many retailers and hospitality firms into the red. 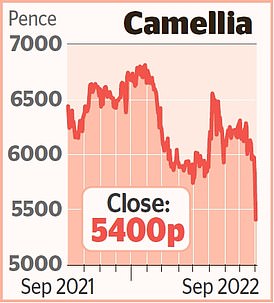 Tea, avocado and macadamia grower Camellia hit its lowest level in 13 years after issuing a profit warning for what it said was one of its ‘most difficult years’.

The company had been buffeted by extreme weather conditions in countries where it grows its crops as well as disruption from the pandemic, the war in Ukraine, supply chain delays and industrial unrest. Profits for 2022 were expected to be lower than the previous year. Shares fell 7.3pc, or 425p, to 5400p.

On the up side, education group Pearson was one of the top blue-chip risers, jumping 1.2 per cent, or 10.6p, to 873.4p after analysts at JP Morgan reinstated their ‘overweight’ rating on the stock.

The investment bank said the firm was making ‘good progress’ in delivering on its strategy and ‘well placed’ to weather the coming slowdown in the economy.

The banking group has sold the 7.4 per cent stake for £538million but expected to take a £31million loss, suggesting it had suffered a hit from the sale. Barclays shares dropped 1.9 per cent, or 3.1p, to 161.4p.

The group expected the purchase to strengthen its digital commerce capabilities. WPP shares were down 2.5 per cent, or 18.6p, to 725.8p.

Serco (down 2.5 per cent, or 4.4p, to 170.7p) was also shopping. The outsourcer bought ORS, a provider of immigration services in Switzerland, Germany, Austria and Italy, for £39million.