A British tech group dubbed the Amazon for engineers saw shares tumble after its American boss took a leave of absence and returned to the US to deal with a family issue.

RS Group, which was founded in 1937 and used to be called Electrocomponents, said its chief executive Lindsley Ruth has stepped back from his role with immediate effect.

Shares plunged 7.3 per cent, or 69.5p, to 885p on the news. It is understood Ruth felt the personal matter was harming his ability to run the FTSE100 business.

RS Group , which was founded in 1937 and used to be called Electrocomponents, said its chief executive Lindsley Ruth has stepped back from his role with immediate effect

Finance boss David Egan will take on Ruth’s duties while also doing his own job. RS chairman Baroness Fairhead said: ‘Under Lindsley we have built a great business and he has our support through this period.

‘The board are very grateful to David and our experienced senior management team for stepping up and we are confident that we will maintain good momentum in the business.’

Ruth ran the private Canadian business Future Electronics before taking over at RS in 2015. He also took a leave of absence between November 2019 and February 2020 due to personal health issues.

The change at the top came as the company said revenue rose 21 er cent to £1.46bn in the six months to September while profit soared 34 per cent to £182.5m.

There was no slowdown in Europe and the Americas despite the global economic turmoil, RS added. The group also said its £246m acquisition of the Mexican distributor Risoul should be completed by the end of the year. 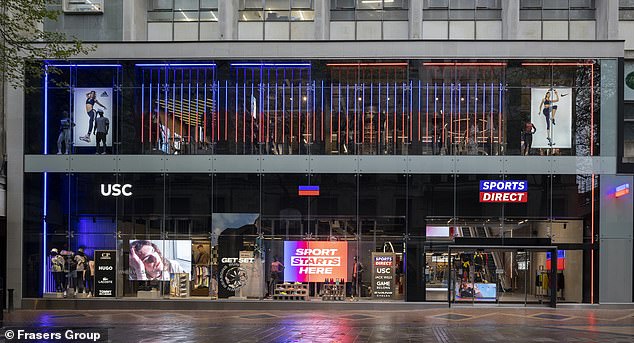 The chairman of Frasers Group , which owns Sports Direct, Jack Wills and Flannels, snapped up more than £20,000 of shares

Smith & Nephew, the medical implant and prosthetics maker, inched up 2.9 per cent, or 29p, to 1034.5p after it said revenue for the year was on track to grow between 4 per cent and 5 per cent. Revenue rose 4.8 per cent to £1.11bn in the three months to October.

The group also became the first company to receive regulatory approval from the US Food and Drug Administration for its robotics-assisted knee surgery. 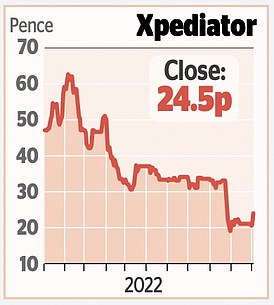 Shares in Xpediator soared after it cashed in on transporting goods around Europe. The AIM-listed freight management company said its revenue of around £300m in the nine months to September was more than the whole of 2021. Xpediator hailed the performance of its freight operations in Lithuania, Bulgaria and Romania though the UK division lagged behind. The group also said it aimed to reduce debt. Shares surged 16.7 per cent, or 3.5p, to 24.5p.

In the second tier, Hikma Pharmaceuticals gained 1.1 per cent, or 13.5p, to 1296.5p after it reiterated forecasts for the year and said its search for a chief executive was progressing well.

Kitchen supplier Howden Joinery gained 3.2 per cent, or 16.4p, to 535p after raising its profit forecast for the year as a result of families improving their homes. Profit is now expected to be ‘marginally ahead’ of the £387m figure forecast by the market.

But revenue rose 28.8 per cent to £737.9m in the three months to September, helping it remain on track to deliver full year results in line with expectations. Shares sank 7.4 per cent, or 9.8p, to 123p.

Trainline shares fell by 8.8 per cent, or 30p, to 310.7p after the ticket seller warned recent strike action held back the rail industry’s post-pandemic recovery. But ticket sales surged 116 per cent to £2.2bn in the six months to August and revenue rose 112 per cent to £165m. Trainline also swung to a profit from a loss.