Shaftesbury and Capital & Counties (Capco) – which between them own vast swathes of Covent Garden, Soho, Chinatown and Carnaby Street – warned that the value of their estates had fallen as rising interest rates wreaked havoc on the property market.

Shaftesbury saw the value of its portfolio slide 3.6 per cent to £3.2billion in the six months to September.

Shaftesbury and Capital & Counties – which own vast swathes of Covent Garden, Soho, Chinatown and Carnaby Street (pictured) – warned that the value of their estates had fallen

Capco’s valuation sank 2 per cent to £1.8billion in the three months to September.

But shares rose – with Shaftesbury up 2.23 per cent and Capco 2.71 per cent – as the outlook on the ground appeared brighter than feared.

Leasing activity remained stable over the six months to the end of September, the group added.

Meanwhile, Capco was upbeat on footfall and sales across Covent Garden. It has raked in £3million of contracted income since June and signed 35 new leases and renewals, including the jewellery brand Mejuri and the premium sportswear brand Hoka.

Two other stores signed by Capco are to open by Christmas alongside the launch of a partnership with Dolce & Gabbana.

The landlords are set to complete a £3.5billion mega-merger in the first quarter next year if it is approved by the competition watchdog. 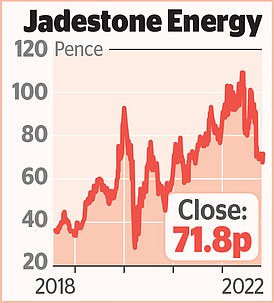 Jadestone Energy rose after completing its purchase of a stake in an oil project off the coast of Western Australia.

Some 650,000 barrels of crude will be sold from the oil fields later this month, adding ‘significant cash proceeds’ to Jadestone by the end of the year, the group added.

Ukraine-focused miner Ferrexpo warned it was drawing down stockpiles of its iron ore products to supply customers.

Retail and leisure stocks were on the front foot as the brighter mood on the markets lifted shares that have spent much of the year on the slide.

Meanwhile, online electricals retailer AO World surged 8.5 per cent, or 3.8p, to 48.5p after it put the global chief digital officer at Pret A Manger on its board.

Aston Martin has appointed two representatives from Saudi Arabia’s Public Investment Fund (PIF) to its board.

The move came after the Saudis took an 18.67 per cent stake as the British carmaker raised fresh funds this summer – making them the second largest shareholder behind executive chairman Lawrence Stroll.