Serica Energy became the latest North Sea stock to cash in on booming prices of natural gas after posting a surge in profits.

The AIM-listed firm reported a profit of £194million for the first six months of the year, up from £2.2million for the same period in 2021, as its production rose to an average of 26,600 barrels of oil equivalent (boe) a day from 18,855 last year.

The figure represented 5pc of all gas produced in the UK in the period. While natural gas prices were ‘highly volatile’, Serica pointed out that the average price per therm had surged to 175p, more than three times the average of 50p a year ago, fuelling a profits spike.

Serica Energy reported a profit of £194m for the first six months of the year, up from £2.2m for the same period in 2021

It also predicted the windfall tax on energy firms, introduced earlier this year by then chancellor Rishi Sunak, could have a ‘significant impact’ on performance.

Serica shares rose 3.8 per cent, or 13p, to 355p after the results. Oil and gas firms have seen profits boom after Russia’s invasion of Ukraine disrupted energy supplies.

But the sums have sparked outrage among politicians, who have accused the sector of profiting while households struggle with surging bills.

Gas prices showed no signs of retreating amid reports of leaks in the Nord Stream 1 and 2 Russian pipelines, which officials in Denmark and Germany suspected could be the result of sabotage.

Natural gas prices surged more than 10 per cent after the news.

However, SSE fell 7.3 per cent, or 122p, to 1549p after warning that its renewable energy output had fallen 13 per cent below expectations in the year to September 22.

The firm blamed unfavourable weather conditions, but added that its gas storage sites and thermal power plants had performed well. 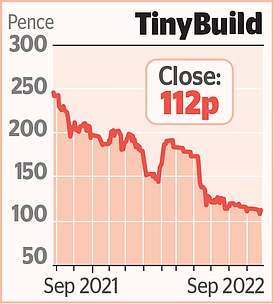 Boss Alex Nichiporchik said this had been despite ‘unprece- dented challenges’ such as extracting staff from Russia and Ukraine amid the war. It was on track for future results in line with forecasts.

Markets were slightly becalmed after the febrile trading in the wake of Kwasi Kwarteng’s mini-Budget last week.

But while sterling stabilised somewhat, worries about the health of the British economy continued to weigh on sentiment.

Property firms were again on the back foot amid fears rising interest rates will result in more expensive mortgages, putting the brakes on housing demand.

But one firm on the rise was lender Virgin Money, which gained 0.3 per cent, or 0.35p, to 132.65p after it suspended some mortgage deals.

The FTSE 100 group forecast that revenues for the six months to the end of March next year would be 1pc lower year-on-year due to ‘moderately lower than forecast’ consumption levels.

Shares in National Grid dipped 4 per cent, or 40p, to 948.2p after regulators opened a probe into the group’s planned sale of 60 per cent of its gas transmission and metering operation to Australian investment bank Macquarie.

The Competition and Markets Authority will investigate whether the deal will result in a ‘substantial lessening of competition’ in the UK, and has until November 22 to make a decision.