Lloyd’s of London insurer Beazley is counting the cost of major natural disasters that caused havoc across Europe and North America over the summer months.

The FTSE 250 firm estimated losses of £63million from the effects of Hurricane Ida, which hit the coast of Louisiana in late August.

The storm was the second-most destructive hurricane in the history of the state, surpassed only by Hurricane Katrina in 2005, claiming around 1,800 lives.

Devastation: Hurricane Ida, which hit the coast of Louisiana in August, was the second-most destructive hurricane in the history of the state, surpassed only by Hurricane Katrina in 2005

Things were similarly costly in Europe, which was hit by devastating floods in July that swept across several countries including Germany, the Netherlands, Luxembourg and Switzerland.

Beazley has pencilled in losses of £29.7million relating to the catastrophe.

Both incidents have raised alarm bells over the effects of climate change on extreme weather, which has previously been blamed for causing catastrophic forest fires across Australia and California.

Despite the hefty £93million cost of the disasters, Beazley’s shares jumped 5.4 per cent, or 21.3p, to 417.3p as the company’s premiums for the three months to the end of September came in ahead of expectations. 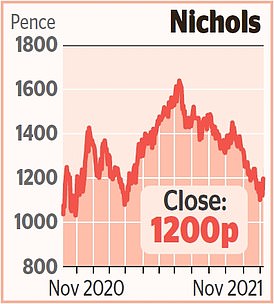 Revenue in the nine months to the end of September increased 17 per cent to £107million, ahead of the company’s expectations, as demand for its beverages continued to recover from the pandemic.

As a result, profits for the full year were expected to be ahead of market predictions and between £21million and £22million, although Nichols – which has been making soft drinks since 1908 – warned the following year could be hit by rising inflation.

Gross premiums for the period surged 29 per cent year-on-year to £2.4billion. Premium rates for its renewal business also rose by 23 per cent, ahead of the company’s predictions.

Most of the growth in premiums came from the group’s cyber and executive risk business, which expanded by 44 per cent year-on-year to £736million.

‘I am delighted that the momentum from the first half has persisted into the second,’ said Beazley boss Adrian Cox.

He added: ‘We continue to be strongly capitalised and are well placed to take advantage of these favourable market conditions.’

Markets were buoyed by better than expected US jobs data which saw payroll numbers grow by 531,000 in October, better than the 450,000 expected.

The blue-chip index was supported by shares in BT, which was up 1.4 per cent, or 2.2p, at 160p after bringing back its dividend.

Also rising was Rolls-Royce, up 5.8 per cent, or 7.86p, to 142.94p amid hopes the reopening of the US to international travellers next week will boost demand for its engines from commercial airlines.

Morgan Advanced Materials, which makes ceramics and crucibles for metal smelting factories, surged 8.3 per cent, or 28p, to 365p after predicting a full-year performance at the top of its expectations.

Sales in the nine months to September were up 8.9 per cent year-on-year, and as a result, Morgan expected growth for the whole of 2021 would be towards the higher end of its forecast of 7 per cent to 9 per cent.

Telecoms firm Airtel Africa bounced 11.2 per cent, or 12.2p, to 121.2p after its Smartcash payment service received approval in principle to operate in Nigeria. The firm expects full approval within the next six months.

4imprint Group, which makes promotional items such as bags and pens, sank 3.9 per cent, or 120p, to 2925p as supply chain issues and inflation continued to cause issues. Despite this, it expected the full-year performance to be in line with expectations.

Rare stamp dealership Stanley Gibbons gained 3.3 per cent, or 0.1p, to 3.1p after unveiling plans to launch fractional ownership of the 1c-Black on Magenta, the world’s most valuable stamp, from next week. Investors can own a portion of the stamp, the only known surviving copy of a limited set issued in British Guiana in 1856.