Shares in Just Eat soared after it unveiled a major deal between its US business and e-commerce giant Amazon.

As global stock markets staged a rebound from recent sell-offs with traders apparently overlooking the turmoil in Westminster and global recession worries to go bargain-hunting, Just Eat gained 13.8 per cent, or 163.6p, to 1351.4p.

The rise came after it announced American subscribers to Amazon Prime would be able to sign up for a free, one-year membership to Grubhub+, the company’s own service that offers free delivery from hundreds of thousands of restaurants.

Meal deal: American subscribers to Amazon’s Prime service will be able to sign up for a free, one-year membership to Grubhub’s subscription service Grubhub+

In return, Amazon will take a 2 per cent stake in Grubhub, and an option to acquire a further 13 per cent of the business. Just Eat expected the deal will boost its earnings from 2023. It added that it was continuing to explore a possible sale of Grubhub.

The deal with Amazon provides some relief for investors, including Just Eat’s second-largest shareholder and activist Cat Rock Capital, who have been pushing it to offload Grubhub and focus instead on European operations.

The pressure has ratcheted up amid a steady decline in the share price, which over the last 12 months has fallen nearly 80 per cent.

There will be hopes Amazon’s arrival could reduce the financial pressure, and perhaps precipitate a sale of Grubhub to the e-commerce titan.

Some of the biggest risers in the blue-chips were those hardest hit by the recent bout of selling.

Scottish Mortgage Investment Trust, which has large stakes in firms such as Tesla and Amazon, climbed 6.9 per cent, or 49.8p, to 776p after a sharp decline following a previous sell-off in global technology stocks. 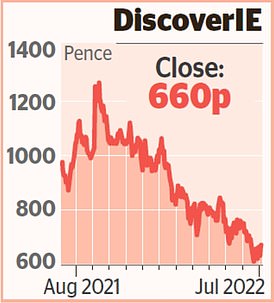 It expects the £5million purchase of the Northamptonshire-based firm to ‘immediately’ boost its earnings when it is integrated into the FTSE 250 group’s Contour business.

DiscoverIE boss Nick Jefferies said that the acquisition will provide CDT with access to a ‘wider base’ of customers.

Major miners were also on the rise, having been hit by fears that a global recession will dent demand for commodities.

Despite rising earlier in the session, oil companies ended in the red as Brent crude dropped to $100 a barrel amid fears a global economic slowdown will dent demand.

Hargreaves Lansdown analyst Susannah Streeter warned the wider mood was ‘likely to be cautious’ as worries persisted about the impact of weakening consumer and business confidence in the economy.

The FTSE 250 firm reported a pre-tax profit of nearly £133million for the year to the end of April, up 98 per cent year-on-year, as it highlighted a recovery from the pandemic and ‘strong’ demand. Despite this, the shares were down 0.5 per cent or 1.5p, at 334p.

Recruitment group Robert Walters rose 0.2 per cent, or 1p, to 510p after a record quarter. It reported net fee income, a key profit measure, of £112million in the three months to June 30, a 26 per cent rise year-on-year as job markets continued to run hot across the world.

The first phase, worth up to £150million, has begun. It is due to end no later than December 30.