The Duchess of Cornwall’s late brother Mark Shand dedicated his life to saving wildlife, co-founding the Elephant Family in 2002.

Now I can reveal his daughter and niece are following in his altruistic footsteps by starting their own charitable venture to help those in need.

Mark’s daughter Ayesha Shand, has teamed up with her cousin, artist Alice Irwin — the daughter of Mark and Camilla’s sister, Annabel Elliot and businessman Simon — to set up a new initiative called My Dear New Friend which involves children writing to the elderly in self-isolation.

Mark Shand’s daughter Ayesha, has teamed up with her cousin, artist Alice Irwin to set up a new initiative called My Dear New Friend which involves children writing to the elderly in self-isolation 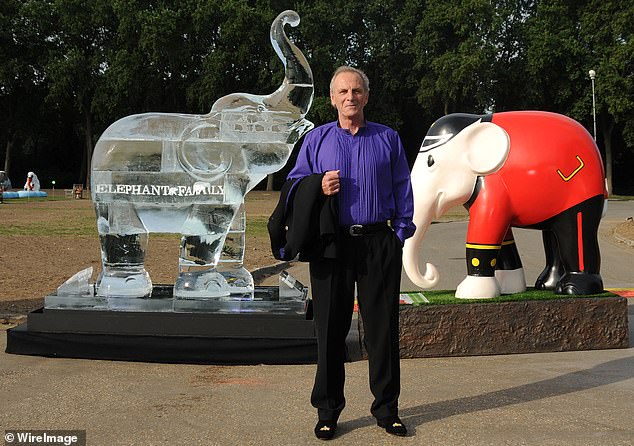 The Duchess of Cornwall’s late brother Mark Shand dedicated his life to saving wildlife, co-founding the Elephant Family in 2002

‘It all started when lockdown began and I was trying to get my two children to do something,’ Alice, 42, tells me from her house in Wiltshire. ‘When I contacted my local care home and asked if there were residents they could write to, they very sadly told me that they were unable to do that because of data protection.

‘Then I realised that if the children addressed it to My Dear New Friend, there’s nothing that would stop us writing. The children wrote and I got a call from the care home saying it had brought unbridled joy.

‘At this time, where we’re all slightly fearing people, I think to make a new friend through this, and across generations, is wonderful. And so simple. Just for the price of a stamp!’ 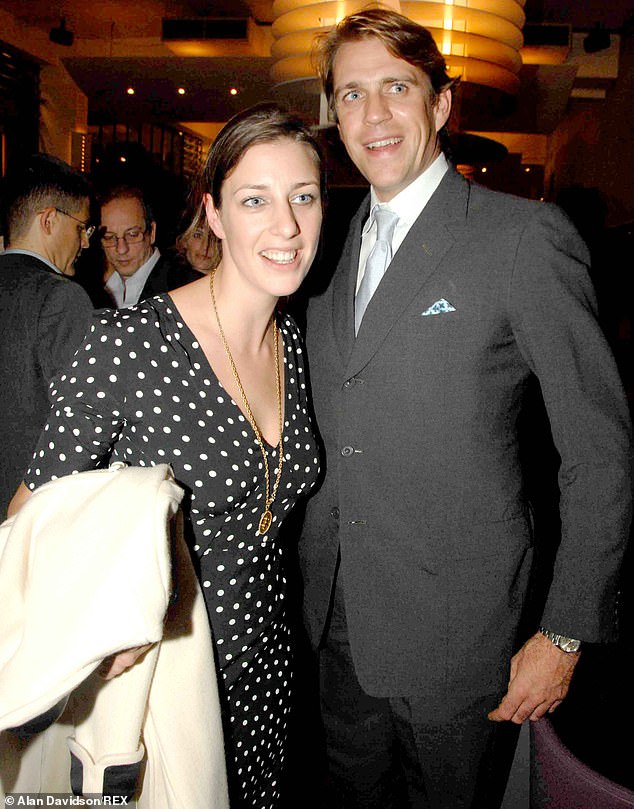 Ayesha has teamed up with her cousin, artist Alice Irwin (left) to set up the initiative. She is pictured with her brother Ben Elliot

Ayesha, 25, who works alongside Princess Eugenie at the Hauser & Wirth art gallery in Mayfair, got involved with the epistolary project because she is staying with Alice during lockdown. ‘I started helping with the Instagram side of it,’ she explains. ‘Then I started contacting some friends and telling them about the initiative. They all thought it was such an amazing idea.’

Her colleague, Princess Eugenie, describes it as ‘wonderful’.

Alice hopes schools will get involved by encouraging pupils to take part — something they can easily do from home. ‘And children do so much online that it’s nice for them to do something different,’ adds Alice. ‘When you first write, you address it to My Dear New Friend and include a covering letter which you can find on our Instagram page. Data protection drops after that when somebody writes back.

‘We forget what a joy writing and receiving a letter can bring us.’

Newly published figures reveal that his firm, BAS Promotions, which he set up in 2013, is now sitting on £500,000 in on-going profits. The World Cup winner runs the firm with his wife, Clare. Among its assets is a modest two-bedroom flat close to Durham County Cricket Club, where he’s played since 2009.

This never happened when she was on Blue Peter.

TV presenter Konnie Huq (right) has revealed that she and her husband, Black Mirror creator Charlie Brooker, almost burned their house down after putting wood in their oven.

‘My husband made kebabs on wooden skewers,’ Konnie says. ‘We put them in the oven, then looked a little later — and the whole thing was on fire.’

Konnie, whose sister is Labour MP Rupa Huq, should know better: their father ran an Indian restaurant in London’s Soho.

TV presenter Konnie Huq (right) has revealed that she and her husband, Black Mirror creator Charlie Brooker, almost burned their house down after putting wood in their oven

Great British Bake Off silver fox Paul Hollywood confesses his own home baking skills have been tested due to the national shortage of flour. ‘I’ve been doing a lot of baking since lockdown started. Flour is the issue, though, I’ve got baking powder, which I’ve been given by a neighbour, but I must admit that I haven’t got any plain flour. One of my favourite things to make at the moment is banana bread. I haven’t made it for about 12 years — when I used to supply it to hotels — but I’ve had to use strong flour, which is all that I had. I improvised, baked it, carved it up, put a little bit of butter on it and had it with a cup of tea. It was delicious.’

The 18th-century property, where prices start from £150 a night, is on the edge of the 2,000-acre Dumfries House Estate, which the Prince of Wales saved for the nation in 2007.

Because of lockdown, the awards ceremony was held online. A spokesman says: ‘Lodge manager Colin Caird and his staff look forward to welcoming guests back when they are able to do so.’

Sophie’s Insta-rant after her tortoise is censored

Roald Dahl ’s model-turned-author granddaughter, Sophie is not getting much peace at home as she reveals she’s at war with Instagram after they banned a video of her beloved tortoise.

‘I amused myself no-end creating a video of Torty, who had been pushing a scooter to the opening bars of Magic Stick by Lil’ Kim,’ says Sophie.

Roald Dahl ’s model-turned-author granddaughter, Sophie is not getting much peace at home as she reveals she’s at war with Instagram after they banned a video of her beloved tortoise

‘I then posted it on Insta. Three seconds later I received an email from Instagram saying they had removed the video due to copyright infringement.

‘Their policing priorities are skewed.’ 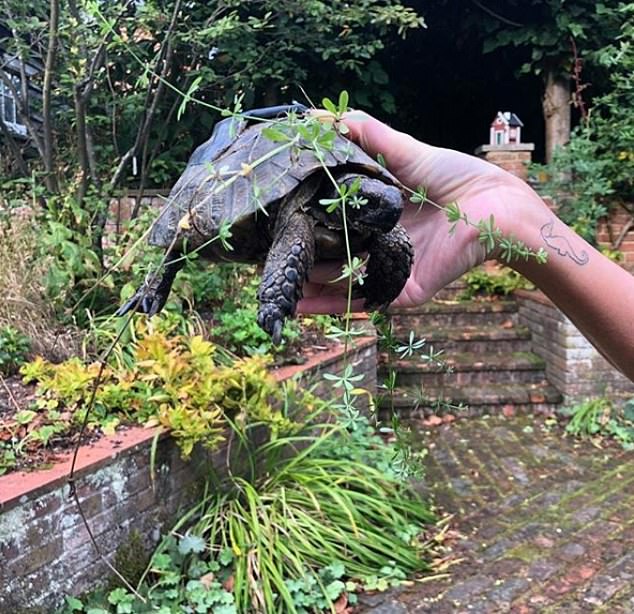 Sophie said posted a video of her tortoise on Instagram. She said: ‘Three seconds later I received an email from Instagram saying they had removed the video due to copyright infringement’

Funnyman Ricky Gervais doesn’t believe people should judge his character by his jokes.

‘I think people make the mistake that any joke is the window to the comedian’s soul. They think that could be your true feelings but it isn’t and could be the opposite.

‘Where is this weird rule that a comedian can’t joke about a subject? When you look into it, there’s no reason to be offended, it’s like being offended by maths, it doesn’t affect you. It isn’t real harm.’

Pendleton: I can’t put on the brakes!

Olympic gold medallist Victoria Pendleton has revealed retirement isn’t all that it’s cracked up to be.

‘I thought I would be really excited about leaving elite sport and I would have all the freedom to do what I want, when I want,’ she says.

‘And actually it felt in some ways like the opposite because I had so much freedom, I didn’t know what to do, which I’ve never experienced before.’ The 39-year-old cyclist and equestrian, who has spoken of her battle with depression, adds: ‘I’ve been pushing myself ever since I’ve finished and it’s like I haven’t quite accepted that I’ve finished. I keep doing new sports and crazy stuff.’

Not to mention covering herself with tattoos.

Lockdown has enlightened Sir Rod Stewart’s musician daughter, Ruby. ‘Stepping away from TV and social media has made me realise I spend a lot of time documenting my life and watching others share theirs instead living in my own,’ says the 32-year-old, whose mother is model Kelly Emberg.

Ruby is staying with Rod and his wife Penny Lancaster in Florida. ‘Being still has opened my eyes to the authentic beauty in the world. It feels like active admiration through forced awakening, and mine was long overdue.’ Every cloud . . . 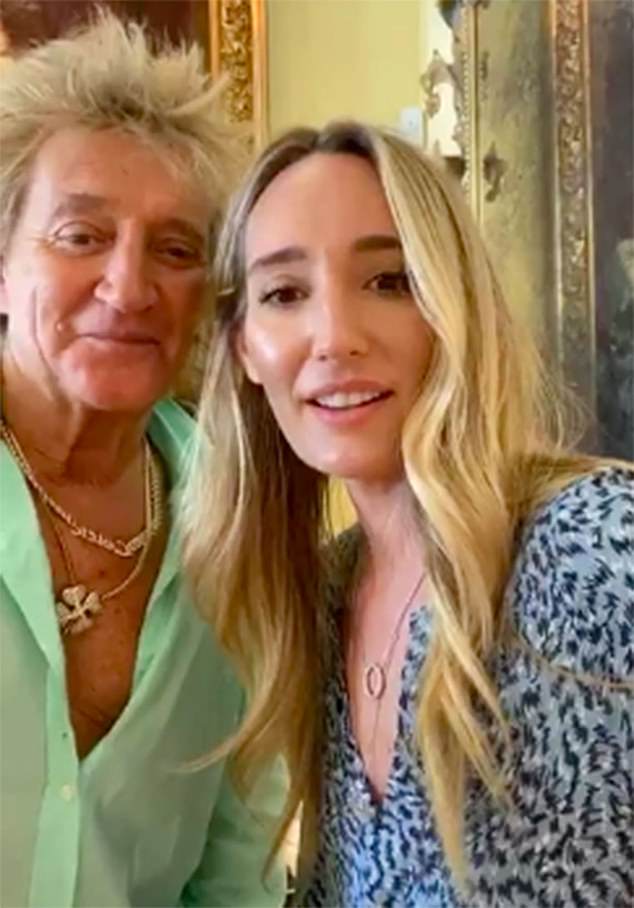