By Bethan Edwards For Mailonline

Mark Owen appeared to take style tips from the 80s as he performed at day four of Latitude Festival 2022 at Henham Park in Southwold, Suffolk on Sunday.

The Take That singer, 50, cut a dapper figure in a crisp white blazer and matching trousers reminiscent of Don Johnson’s Miami Vice character Don Johnson while entertaining fans at the event.

He teamed his suit with a round neck pink T-shirt, layered with two silver necklaces.

Dapper: Mark Owen seemed in high spirits as he performed at day four of Latitude Festival 2022 at Henham Park in Southwold, Suffolk on Sunday

The star styled his long dark tresses down from a centre parting as they sat on his shoulders.

Mark seemed to channel actor Don Johnson in Miami Vice as he opted for the stylish ensemble.

The singer seemed to be getting the crowd partying as he held his arms up while performing. 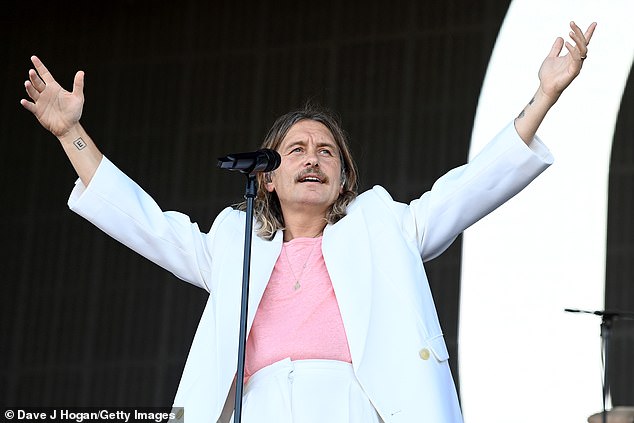 Looking good: The former Take That singer, 50, cut a dapper figure in a crisp white blazer and matching trousers 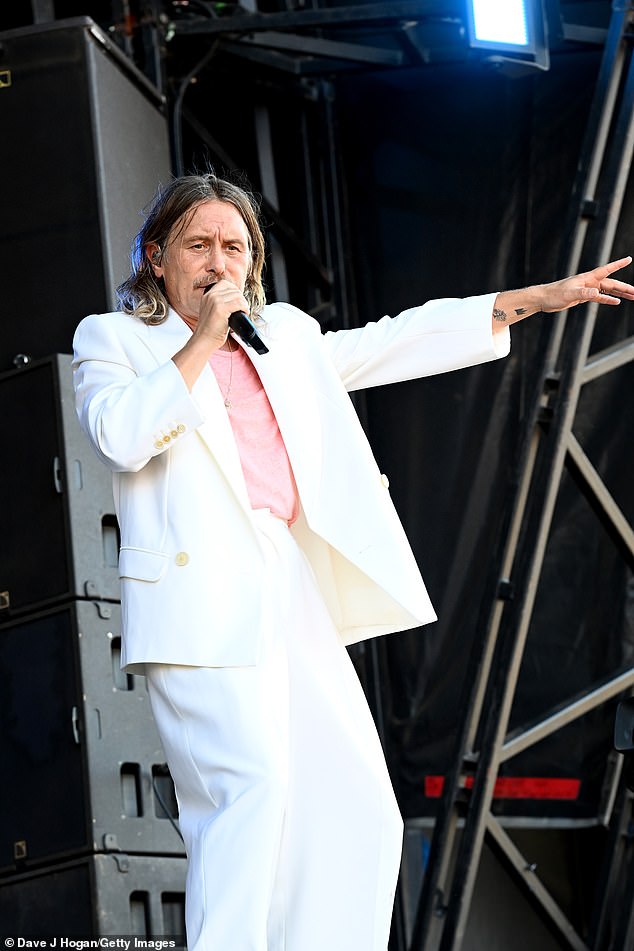 Smart: He teamed the number with a round neck pink T-shirt and layered two silver necklaces

Mark revealed earlier this year that he finally hopes to be known as the ‘cool one’ in Take That as he releases his first solo album in a decade.

In a new interview, the singer opened up about his latest music offering, revealing that bandmates Gary Barlow, 51, and Howard Donald, 54, joked it was ‘s**t.’

Speaking about his long-awaited album, Mark told The Sun: ‘I try and play it cool but I’m not cool, there’s no coolness in me. Even being in Take That for all this time I still don’t think there is, but that’s all right. 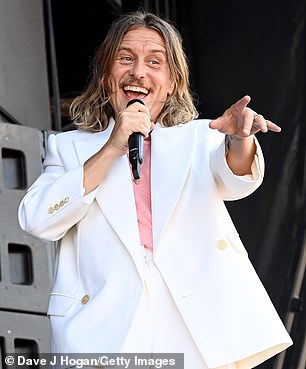 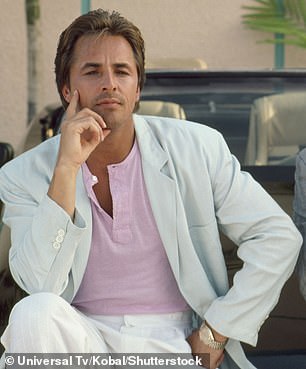 Amazing: Mark seemed to channel actor Don Johnson in Miami Vice as he opted for the stylish ensemble 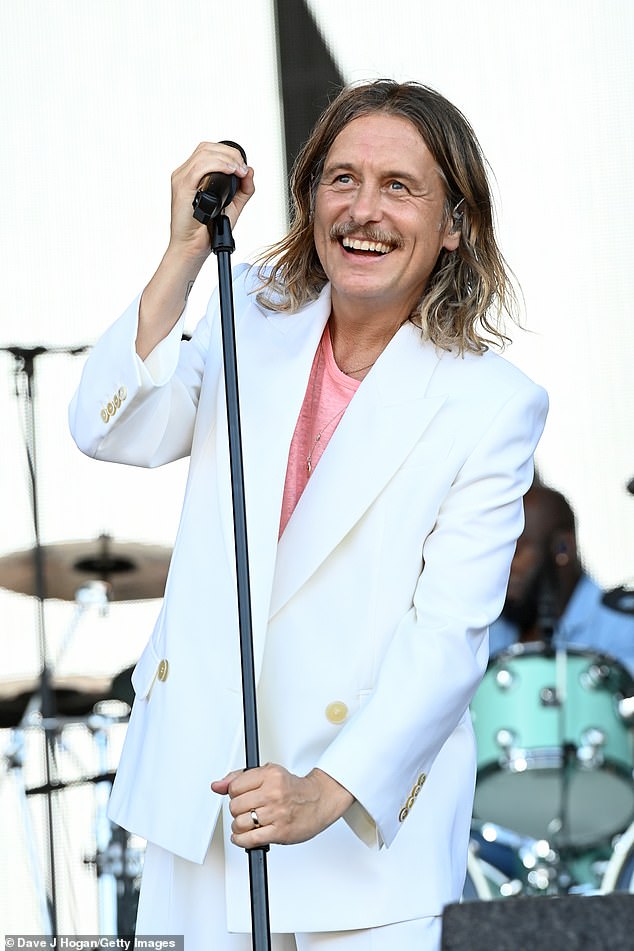 Chic: The star styled his long dark tresses down from a centre parting as they sat on his shoulders

‘Howard (Donald) always thinks he’s cool, and Jason (Orange) really was cool — he just is. At least I’ll be the coolest guy on this album!’

The group last performed together in 2019 on their Odyssey: Greatest Hits Live tour and have spent the past few years on a break working on solo projects.

And their break, as well as the coronavirus lockdown, allowed Mark to work on his own album, though the record was initially met with a cheeky jibe from his pals. 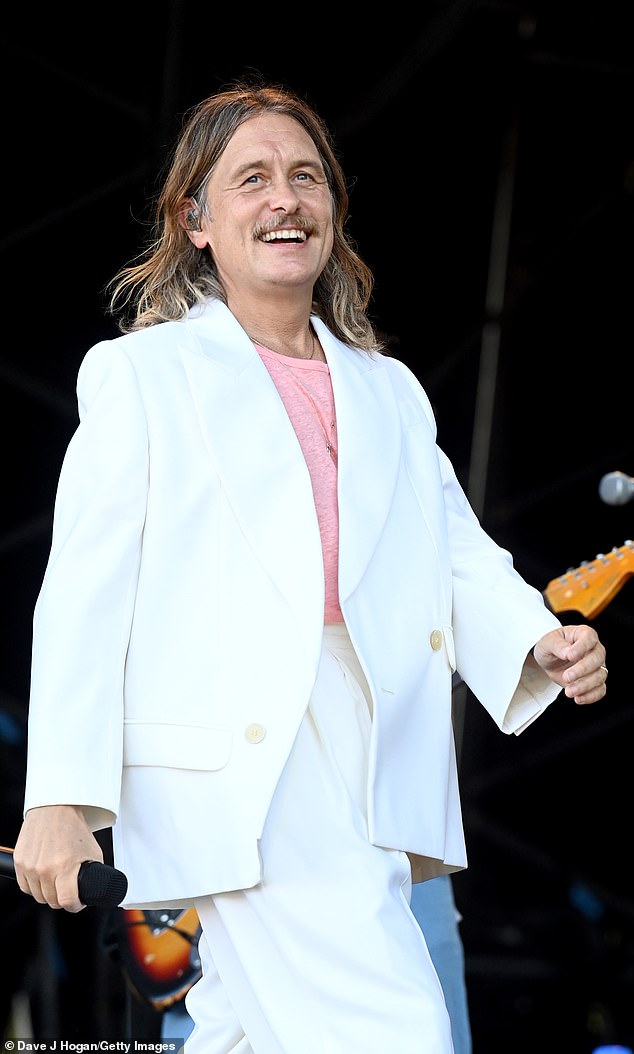 Wow: The singer seemed to be in high spirits as he performed in front of crowds

He explained that he ‘sent the song’ to Howard and Gaz, only for them to say ‘it was s**t’, with Mark quick to add: ‘No, afterwards they were very complimentary.’

The star went on to say that with Take That’s latest hiatus, it allowed him to fully focus on creating his album, remarking that making music and performing is ‘part of my life.’

He said: We’ve made three Take That records since my last solo album but I’m not very good at multi-tasking. I can’t do two things at once so I needed to know I had a couple of years to focus on it. The adrenaline of making music and performing is just part of my life.’ 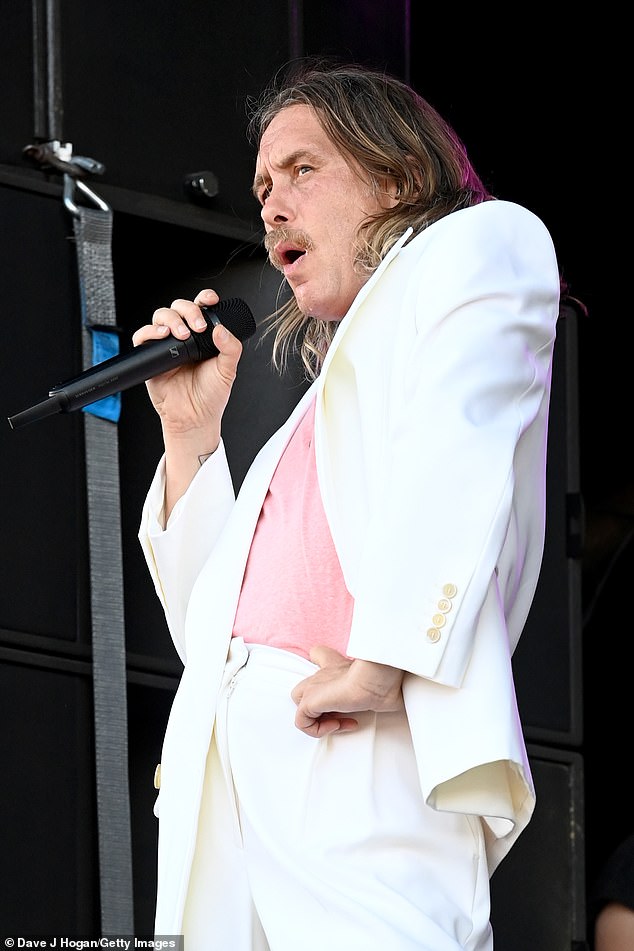 Work it: The Take That star showed off his moves while taking to the stage at the festival

He added that he ‘can’t wait’ to get ‘back on stage’, adding that he can’t wait for his work to get ‘out there’.

The Babe hitmaker is no doubt especially proud of his album as his daughters Willow, 13, and Fox, nine make a cameo appearance on it as backing singers.

And as well as new music, fans of Mark could have even more to celebrate as the star hinted that he could make the move back to the UK after years of living in Los Angles.

He noted that the last few times he had returned to his native Manchester, he had felt ‘a bit of a pull’ back to the North of England.

He said despite family living there, being back in Manchester ‘just feels different’ as he questioned why he was getting ‘a pull’ towards his home city. 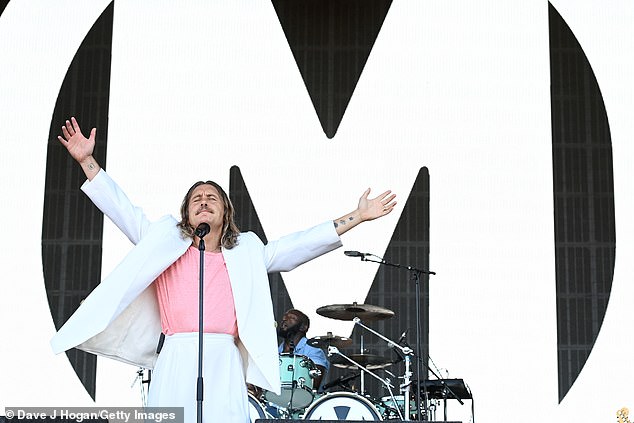 Exciting: Mark took in the crowds atmosphere as he held his arms up while performing