EXPRESS INFORMER > News & Politics > Marine species are edging closer to Earth’s poles at an average pace of 3.7 miles per year

Marine species are edging closer to Earth’s poles at an average pace of 3.7 miles per year as climate change causes global sea temperatures to rise

Marine species are edging closer to Earth’s poles at an average pace of 3.7 miles per year as climate change causes global ocean temperatures to rise, a study has found.

It has long been known that the impact of global warming has been forcing animals to leave their normal habitats behind as their environmental conditions change.

However, analysis by French researchers have revealed that marine species are migrating northward around six times faster than their land-based counterparts.

Experts warn that these migrations could see species riding an ‘escalator to extinction’ as their viable habitat ranges grow more and more limited.

Marine species are edging closer to Earth’s poles at an average pace of 3.7 miles per year as climate change causes global ocean temperatures to rise, a study has found (stock image)

In their study, Jonathan Lenoir of the Université de Picardie Jules Verne in France and colleagues reviewed 258 existing studies, comparing more than 30,000 habitat shifts from more than 12,000 species of animals, bacteria, fungi and plants.

They used this information to create a database of climate-driven species movements — a resource which they have dubbed ‘BioShifts’.

The researchers found that terrestrial — or land-dwelling — animals are also moving polewards as the climate warms — but ‘at a pace that is much slower than expected, especially in areas with warm climates.’

The team found that amphibians are moving towards higher latitudes at a rate of around 39.7 feet (12 metres) a year — with reptiles moving their habitats at the slower rate of around 21.3 (6.5 metres) on an annual basis.

Insects, meanwhile — which can serve as a vector for many diseases — were found to be headed poleward at a rate of around 11.5 miles (18.5 kilometres) per year.

Overall, the researchers found that marine species were migrating their habits at an average pace of around 3.72 (6 kilometres) a year — compared to the comparatively slower pace of 5.9 feet (1.8 metres) each year for land-based species. 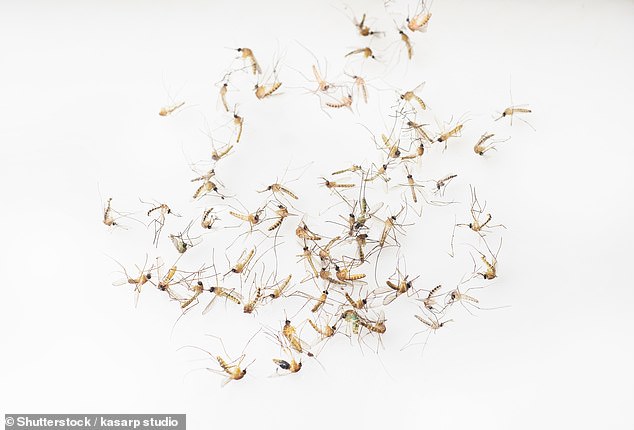 The team found that amphibians are moving towards higher latitudes at a rate of around 39.7 feet (12 metres) a year — with reptiles moving their habitats at the slower rate of around 21.3 (6.5 metres) on an annual basis. Insects, pictured — which can serve as a vector for many diseases — were found to be headed poleward at a rate of around 11.5 miles per year

According to Dr Lenoir and colleagues, various factors could explain these discrepancies — from how water conducts heat 25 times more effectively than the air, to how land animals are typically better at regulating their body temperature.

This means that marine species are likely more motivated to shift their habitat ranges — and also more capable of doing so than their terrestrial counterparts, who may be impeded by human activities, which may force movements in the ‘wrong’ direction.

‘On land, habitat loss and fragmentation due to land use changes may impede the ability of terrestrial species to track shifting isotherms [lines of constant temperature],’ the researchers wrote in their paper.

‘These complex interactions need to be accounted for to improve scenarios of biodiversity redistribution and its consequences on human well-being under future climate change.’

The researchers have cautioned, however, that — despite its size — the BioShifts database is limited by only covering around 0.6 per cent of the known life on Earth, and has an inherent bias towards those species that live in the northern hemisphere.

Nevertheless, the database may still help experts track habitat shifts — with the potential to help us predict what changes we might face in the future.

The full findings of the study were published in the journal Nature Ecology & Evolution.

EXTINCTION LOOMS FOR MORE THAN ONE MILLION SPECIES