The right-wing leader posted the three photos in 2015, one which included the decapitated body of US journalist James Foley, after her National Rally party was compared to the jihadists by a TV interviewer.

Le Pen, 52, said she tweeted the images to highlight the absurdity of the comparison and had denied any wrongdoing, calling the trial politically motivated.

Her lawyers welcomed today’s acquittal, saying that freedom of speech had been protected.

In 2018 a judge charged her, as well as her party colleague Gilbert Collard who also tweeted the pictures, with circulating ‘violent messages that incite terrorism or pornography or seriously harm human dignity’ and that can be viewed by a minor.

The court acquitted both Le Pen and Collard on Tuesday, citing the right to freedom of expression.

The court recognised Le Pen’s intention to inform by sharing the images and said doing so can contribute to public debate, as long as violence is not normalised.

‘It’s a great victory for law because freedom of expression was at stake in this case,’ Le Pen’s lawyer Rodolphe Bosselut told reporters.

‘Freedom of expression has been recognised as complete for a top politician,’ he added.

The verdict comes as opinion polls show Le Pen will likely face off again against President Emmanuel Macron in next year’s presidential contest, in a repeat of the run-off seen in the last presidential elections in 2017.

The issue of radical Islam came to fore again last month when retired generals penned a letter to Macron warning of the ‘disintegration of France’ and threatening to seize power. 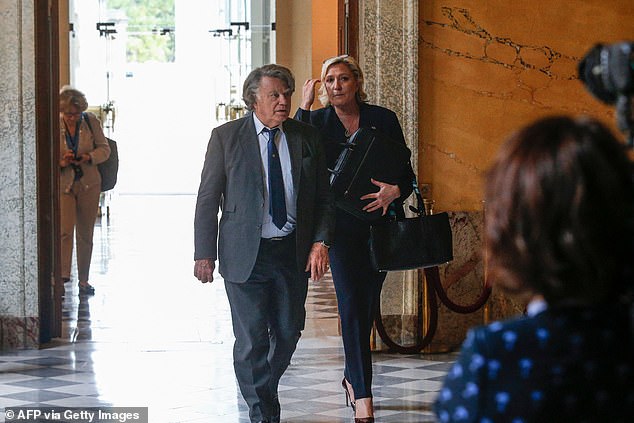 Marine Le Pen and her National Rally colleague Gilbert Collard who was also charged over sharing the images, and also acquitted today

It was signed by more than 1,000 retired soldiers, including around 100 officers and the 20 generals.

Le Pen was one of the first politicians to back the letter, which polls show is also supported by a majority of French citizens.

France has been plagued by terror attacks, including in Paris two weeks ago when a policewoman was stabbed to death by a Tunisian man in a suspected jihadist attack.