People who use marijuana recreationally are more likely to require emergency room care or be hospitalized that their peers are, a new study finds.

Researchers at the University of Toronto, in Canada, found that those who use the drug recreationally are 22 percent more likely to need emergency services for any reason than the general population.

The most common reasons were physical injury or respiratory issues – though it is unclear whether these problems were tied to smoking itself.

Marijuana use has become common place in America as it slowly earns legalization and decriminalization across the country. While it is generally seen as a ‘safe’ drug compared to others, it may carry significant downsides as well.

A person that uses marijuana is 22% more like to need hospital care than their peer that does not use the drug, a new study finds (file photo)

‘After adjusting for a broad range of covariates … all-cause ER visits or hospitalizations was significantly greater among cannabis users than among control individuals,’ researchers wrote.

Use of marijuana in America is growing, with over half of millennials reporting using it at some point

There are also established links between cannabis use and cognitive issues

‘Respiratory-related reasons were the second most common cause for ER visits and hospitalizations in the all-cause outcome.’

Researchers, who published their findings Monday in BMJ, gathered health record data from over 35,000 residents of Ontario for the study.

Each person who self-reported cannabis use was matched to another person with a similar medical profile that did not use the drug recreationally.

The participant who did use the drug was found to have a 22 percent increased risk of needing either emergency care or hospitalization than their non-using peer over the six year study period.

Marijuana users were not more likely to die as a result of any illness or injury, the researchers found.

Researchers warn that their findings do not establish causation, and they were unable to tie any of the hospital visits directly to use of the drug in any way.

This is not the first study to tie marijuana use with increased risk of suffering injury, though.

A 2012 study found that students who used cannabis more than 40 times in a 30 day period – indicating they were frequent users – were at an increased risk of suffering occupational injury than their peers.

A study published last year also found that adolescent frequent users were more likely to self harm, and also die of an overdose of another drug or be a victim of homicide than their peers.

Recreational marijuana use is reaching all-time highs in the United States, as it becomes more socially and legally acceptable to use the drug. 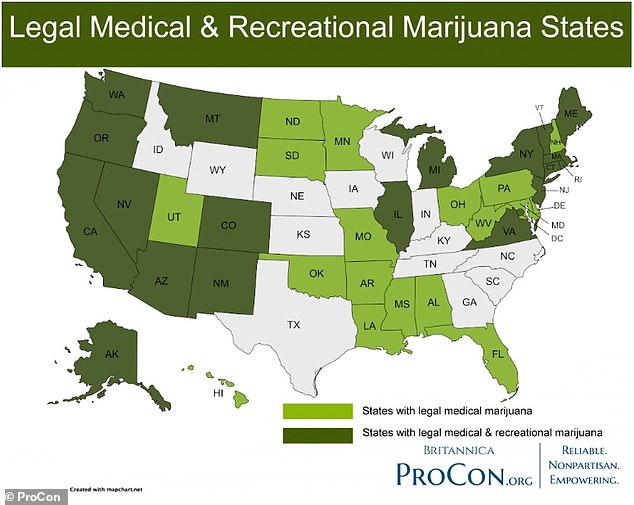 Marijuana is now legal to use recreationally in 17 U.S. states, and allowed medicinally in another 17 states as well

A Gallup poll from last summer found that half of U.S. adults had used the drug at least once in their life, with more than one-in-ten being active users.

Millennials, born between 1981 and 1996, were the group most like to have experimented with it at some point.

Use of the drug is only expected to rise as well as it slowly gains acceptance around the country.

Many employers that previously banned workers from using the drugs and performed pre-employment drug screenings have since dropped those requirements.

The long-banned drug is starting to become legal as well, with 17 U.S. states allowing for recreational use, and the list only expected to grow in the coming years.