Amongst a sea of backlash over his controversial post about wife Katherine Schwarzenegger, Chris Pratt proved to have a very crucial person in his corner.

Pratt’s mother-in-law Maria Shriver, 66, showed her support amid a flurry of disapproving comments as she called him a ‘good man’ and spoke to his character as both a husband and a father to both of his children.

Days ago, the Guardians Of The Galaxy actor was criticized for being ‘sexist’ ‘gross’ and ‘ableist’ relative to a post gushing over his wife of two years where he spoke about her like a ‘possession’ and seemed to deride his first-born child. 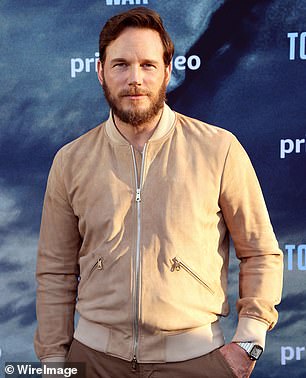 In his corner: Chris Pratt’s mother-in-law Maria Shriver showed her support for the actor amid a flurry of angered comments over his post about wife Katherine Schwarzenegger

Chris’ post was a birthday tribute to his wife (six weeks early) and sparked outrage over the way he spoke about her as his ‘greatest treasure’ next to a baseball card, which some called ‘sexist.’

Additionally the caption lauded how she had given him a ‘gorgeous, healthy daughter’ which many though was a diss to his first-born son, Jack, nine, who suffers from health issues.

Maria had initially commented on the heavily criticized post: ‘This is so sweet now show us how you look at her !!’

After he admitted to feeling ‘depressed’ and ‘upset’ amid the wave of criticism on social media, the former First Lady of California seemed to circle back for a morale boost. 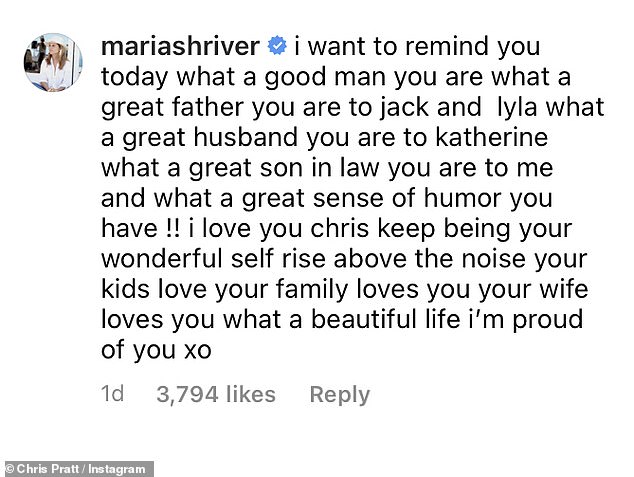 Morale boost: After he admitted to feeling ‘depressed’ and ‘upset’ amid the wave of criticism on social media, the former First Lady of California seemed to circle back for some positive reinforcement

Earlier post: Shriver had originally been one of few supportive comments on his initial post as she called it ‘so sweet’

‘I love you chris keep being your wonderful self rise above the noise your kids love your family loves you your wife loves you what a beautiful life i’m proud of you xo.’ 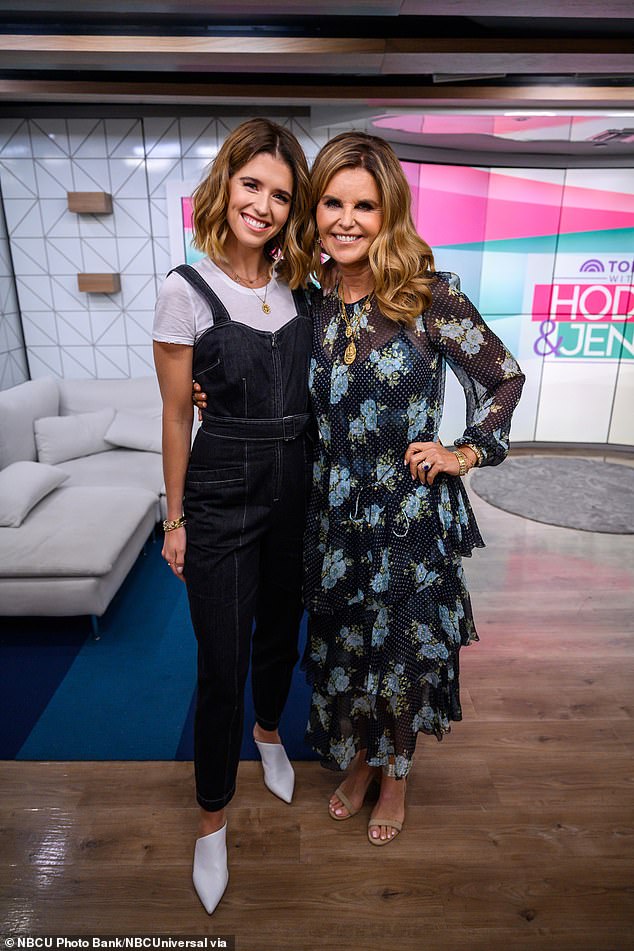 Mama bear: ‘I love you chris keep being your wonderful self rise above the noise your kids love your family loves you your wife loves you what a beautiful life i’m proud of you xo,’ Maria wrote on Pratt’s post days later; pictured with Katherine September 2019 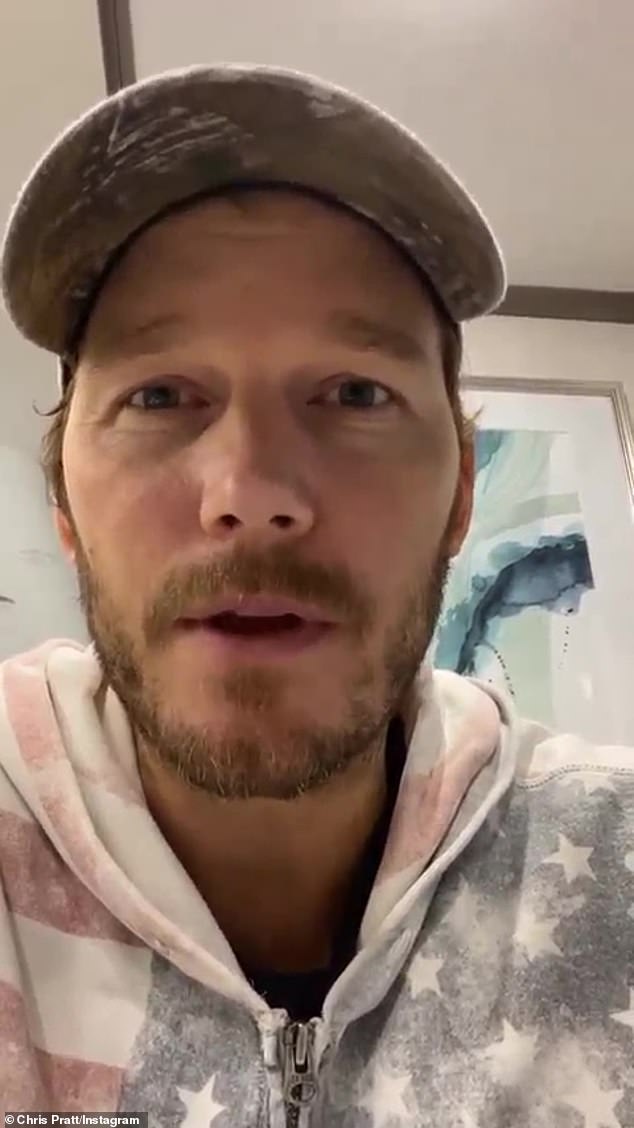 Feeling down: The Parks and Recreation star had admitted to feeling ‘depressed’ and ‘upset’ in an Instagram story on Friday but credited Christian music and physical activity with getting him out of it

Pratt’s caption read: ‘Guys. For real. Look how she’s looking at me! I mean. Find you somebody that looks at you like that!! You know!?

‘We met in church. She’s given me an amazing life, a gorgeous healthy daughter, she chews so loudly that sometimes I put in my earbuds to drown it out, but that’s love!

‘She helps me with everything. In return, periodically, I open a jar of pickles. That’s the trade.

‘Her heart is pure and it belongs to me. My greatest treasure right next to my Ken Griffey Jr Upper Deck Rookie card. Which if you know, you know is saying a lot,’ he added, referencing the Hall of Fame player who starred for the Seattle Mariners after being drafted number one and the Cincinnati Reds.

‘It’s her birthday in about 6 weeks. So if I don’t get her anything, I’ll tell her to look back on this post. Love you honey,’ Chris concluded along with a pair of red heart emojis. 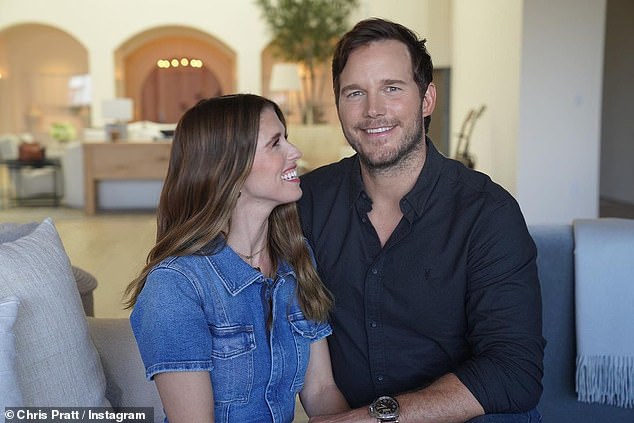 The look: Chris had posted a photo of himself with his wife of two years on November 2, which was meant to be a sweet birthday tribute to her six weeks early 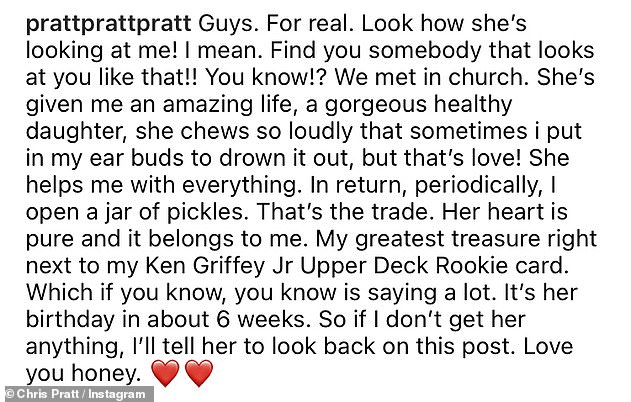 Hearts: He gushed over the doting way she’s looking at him in the snap, how she ‘helps him with everything’ and is his ‘greatest treasure’ next to a favorite baseball card 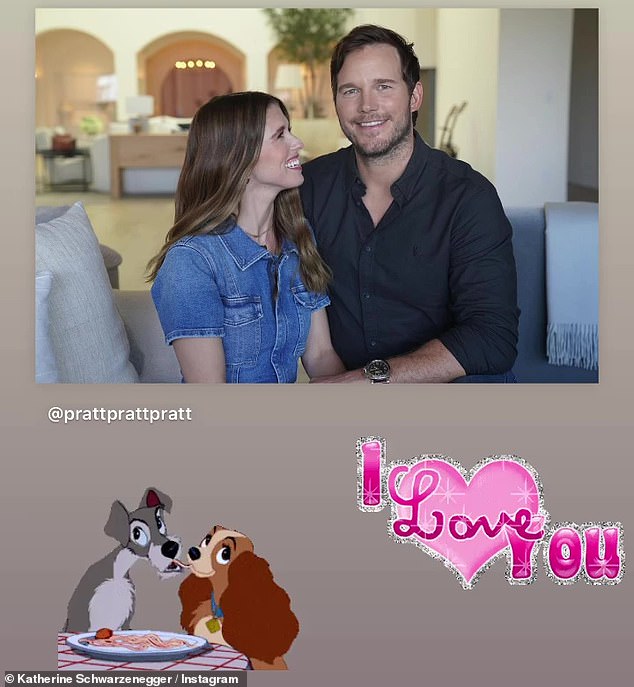 Yikes: Katherine shared the post, in which he also joked about her chewing ‘so loudly’ and said he may not get her a birthday present when she turns 32 in six weeks

But while Katherine, family and friends of the couple had found his words sweet and heartwarming, a majority of comments poured in from critics who found his words ‘disturbing’ — with other terms like ‘sexist’ and ‘ableist’ being thrown around.

‘It’s only cool if you’re looking at her the same man,’ wrote one.

‘I really don’t think this is as great of a post as you think it is,’ commented another with a string of red flag emojis.

‘This appears to be a hostage situation,’ wrote yet another, while one more said: ‘What in the male audacity.’

Several were put off by the way he compared her to a baseball card, with one asking, ‘Did you just describe your wife as a possession?’ 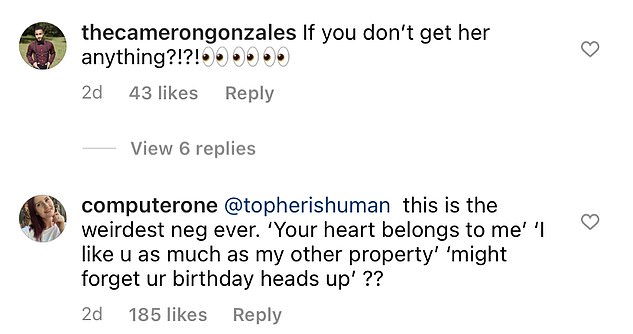 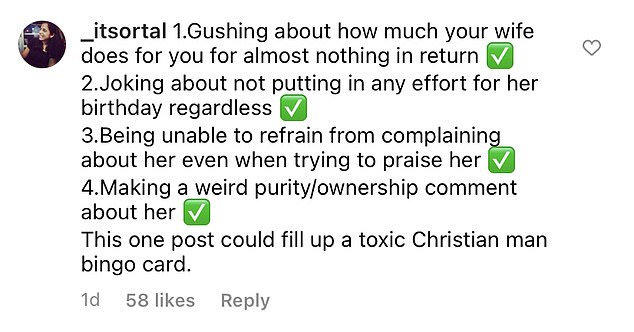 Not impressed: Commenters have called the post ‘gross’ and ‘narcissistic,’ with one saying it ‘fills up a toxic Christian man bingo card’

‘This one post could fill up a toxic Christian man bingo card,’ wrote someone else, explaining that Pratt made ‘a weird purity/ownership comment about her’ and gushed ‘about how much your wife does for you for almost nothing in return.’

Others agreed that it was odd that he was so ready to admit he didn’t do much for his wife.

‘Sir…..why are you proud of doing absolutely nothing for your wife and making a dig at not only your ex wife but also your son???? yikes,’ said one.

Quite a few remarked on how, even in a loving post, Chris chose to name something he didn’t like about Katherine — and also urged him to actually get her a birthday gift.

‘Next time you compliment your wife, reconsider the pathetic negging and the casual disrespect. And by all means, make sure you get her something in about six weeks. That’s more than enough time,’ said one. 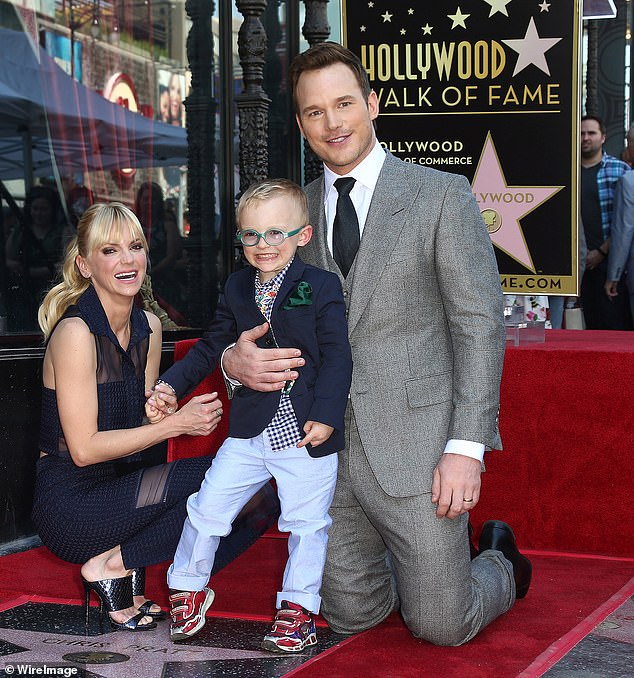 Kiddo: Several have slammed him for not mentioning his nine-year-old son Jack, whom he shares with ex-wife Anna

Ableist: The portion of the caption that upset posters zoned in on was the seeming emphasis on ‘healthy’ daughter, as opposed to his son Jack who struggles with health issues

Other commenters were fixated on how Chris called out his wife and the daughter they share but didn’t mention his son, Jack, whom he shares with ex-wife Anna Faris.

‘I cant wait to say this about my second family,’ wrote one.

‘Did you somehow forget about your son???’ asked another, while a third wrote, ‘Did you forget you have another child?’

‘Great, but besides your rookie card you do have another child,’ yet another chimed in, while one more lectured, ‘Your greatest treasure is your children. Plural. 2 kids.’

‘What about your beautiful son…? As the child of someone who basically forgot I existed when my younger sibling came along that someone else gave him, it f***in sucks to be treated as lesser than or to have my mom treated as such, too. Just saying,’ said yet another.

‘It’s so precious. It almost makes us forget how quickly you abandoned your last family to get this one. God is good, right,’ wrote one more. 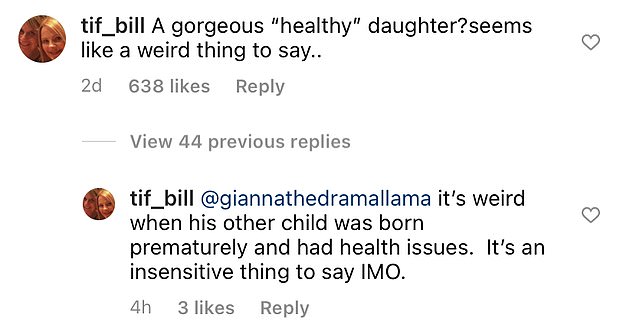 Some commenters zeroed in on Chris’ use of the word ‘healthy’ to describe his daughter. Jack was born two months prematurely and has had some health problems

Some particularly upset commenters zeroed in on Chris’ use of the word ‘healthy’ to describe his daughter, which they considered insensitive to his son.

Jack was born two months prematurely, weighing just three pounds, 12 ounces. He spent a month in the NICU and has severe brain bleeding.

He went on to have a few hernia and eye surgeries, and also had ‘a little heart issue,’ according to Anna. He still has problems with his vision and leg muscles.

‘A gorgeous ‘healthy’ daughter?’ wrote one commenter. ‘Seems like a weird thing to say. It’s weird when his other child was born prematurely and had health issues. It’s an insensitive thing to say IMO.’

‘I notice the emphasis on her ‘giving’ you a ‘healthy’ child. It seems your first child wasn’t good enough,’ wrote another.

‘Why mention she gave you a healthy daughter? Are you bitter that your son was premature and has health issues?? Thats such a passive aggressive statement,’ commented someone else.

‘As a special needs parent, you triggered me when you said she gave you a ‘healthy’ daughter,’ chimed in another critic. ‘Like implying your last wife didn’t? Your kiddo has special needs and he’s special and healthy too! You should praise her for everything she’s been thru. And him too. Just sayin’, that wasn’t Christian-like, dude.’ 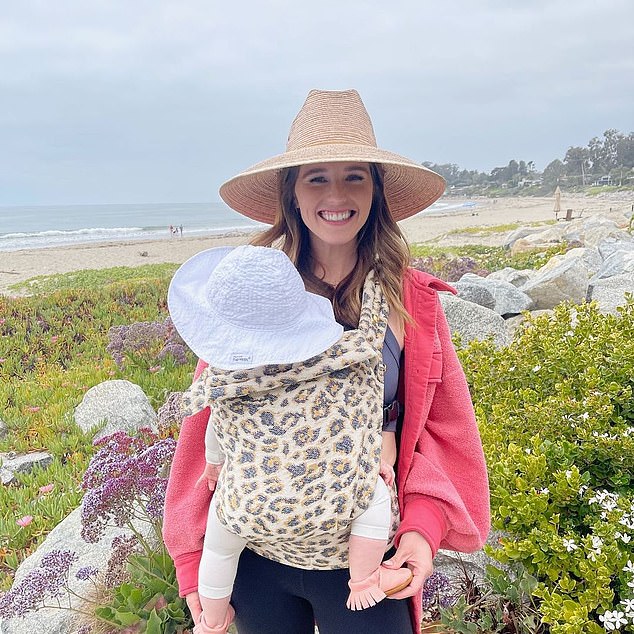 Father of two: Katherine and Chris share one-year-old daughter Lyla Maria and announced they were expecting in the summer of 2020