The Manchester United striker has earned widespread praise for his efforts in changing Prime Minister Boris Johnson’s mind over providing free meal vouchers for under-privileged children during the summer holidays.

It has emerged that Roc Nation played a supporting role in Rashford’s efforts after adding him to their impressive stable of clients in April.

His brothers Dwaine Maynard and Dane Rashford will continue to have complete control over the 22-year-old’s football affairs, having guided his career carefully over the last four-and-a-half years and negotiated the signing of a new contract 12 months ago.

‘We can confirm that Roc Nation has represented Marcus Rashford since April 2020,’ said the company in a statement. ‘The representation is strictly off-field, encompassing philanthropy, PR and marketing, communications, digital strategy and commercial partnerships. DNMaysportsmgt continue to represent Marcus Rashford for all on-field activity.’ 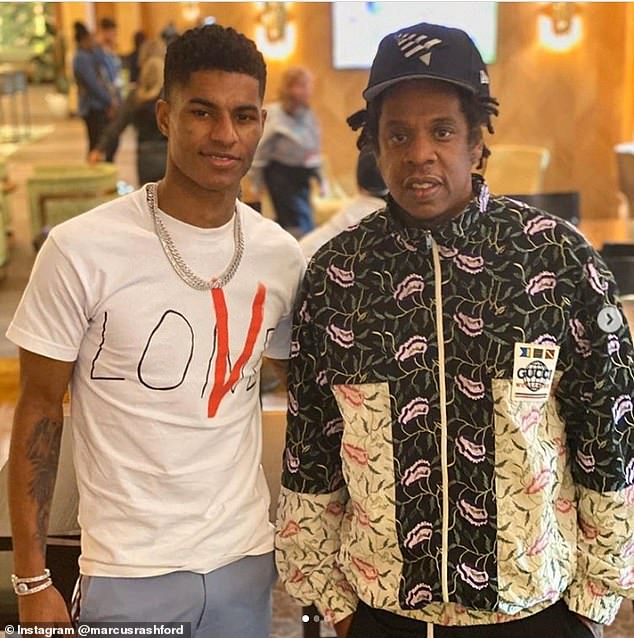 Rashford stands with US rap star and entrepreneur Shawn ‘Jay-Z’ Carter, founder of Roc Nation – the striker posted this picture on Instagram back in February

Although Carter’s involvement gives the operation an air of showbiz glamour, Roc Nation promotes itself as a company with a social conscience and philanthropy at heart.

That has been evident in Rashford’s crusade to feed vulnerable youngsters throughout lockdown and again last month when the company took out full-page adverts in a number of major US newspapers to pay tribute to George Floyd.

The company has established itself as a major player in the US sports market before launching in Europe, and recently signed a partnership agreement with Shanghai and Beijing-based agency SECA to expand into China.