Alexander Kerfoot scored the winner midway through the third period and Frederik Andersen made 27 saves as the Toronto Maple Leafs ground out a 2-1 victory over the Ottawa Senators on Wednesday.

Auston Matthews, with his league-leading 14th of the season, had the other goal for Toronto (12-3-2), while Jake Muzzin chipped in with two assists.

Brady Tkachuk replied for Ottawa (4-13-1). Matt Murray made 26 stops for the rebuilding Senators, who wrap up this three-game set at Scotiabank Arena on Thursday.

Ottawa roared back from a 5-1 deficit late in Monday’s second period against the Leafs before securing a stunning 6-5 overtime decision — the first time in franchise history Ottawa won a game after trailing by four goals. Auston Matthews scored his league-leading 14th goal of the season in Toronto’s 2-1 win over Ottawa. 0:57

Tied 1-1 through 40 minutes Wednesday, the Leafs got their third power play of the night midway through the final period when Nikita Zaitsev went off for hooking. Toronto head coach Sheldon Keefe loaded up the first unit with Matthews, John Tavares, Mitch Marner, William Nylander and Morgan Rielly, but they weren’t able to generate much.

Not long after the penalty expired, however, Kerfoot fished a puck out of a forest of legs in front of Murray following Muzzin’s initial shot to deposit his third goal of the season at 10:46.

Andersen stopped Colin White in tight at the tail end of an Ottawa man advantage later in the period before denying Josh Norris with under four minutes on the clock.

Murray stopped Zach Hyman at the other end to keep his team within one, but the Senators couldn’t find the 2-2 goal.

Following a tentative first coming off that embarrassing loss to a last-place opponent, North Division-leading Toronto opened the scoring at 4:32 of the second when Matthews buried his eye-popping 13th goal in his last 12 games. Moments after Joe Thornton had one of his own waved off for the second time in the game — a high stick on this occasion — Matthews took a pass from Justin Holl and rifled a one-timer past Murray. 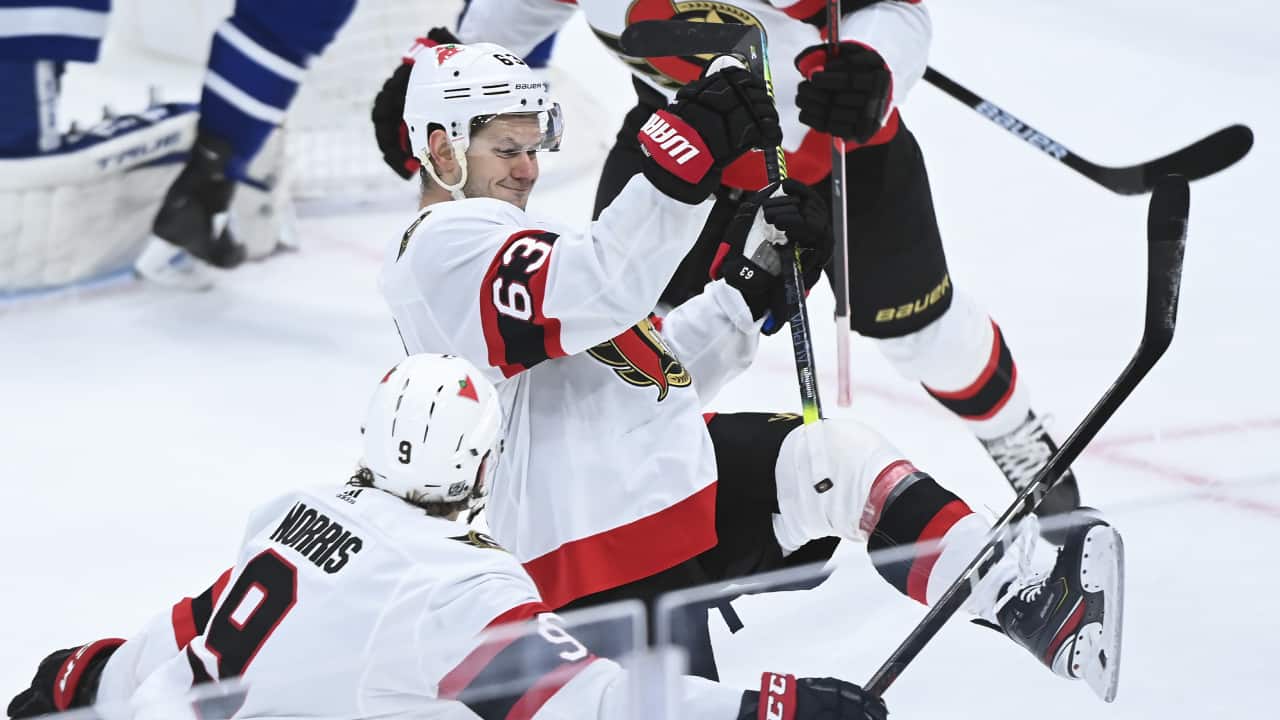 Evgenii Dadonov scored the game-tying and winning goals as Ottawa stunned Toronto in a 6-5 victory. 1:31

Tim Stützle forced a nice stop out of Andersen at the other end following the restart, while Tavares, who came in with just one goal in his last 10 games, saw a power-play effort thwarted by Murray.

The Senators got their equalizer with 1:22 left in the second on a sequence that began when Holl heeled a shot in the offensive zone. The visitors broke the other way with Norris, who hit the post early in the period, and Chris Tierney setting up Tkachuk off the rush for his fifth of the campaign and the 100th point of his NHL career.

The Leafs looked timid early, perhaps wary of making any mistakes after Monday, with the Senators carrying a 21-6 lead in shot attempts after the first period.

Andersen faced at least three-odd man rushes through the opening 20 minutes, while Stützle whistled a shot just wide of the Toronto net on another chance.

Murray made his two best saves late in the period, one with the glove on Tavares in alone and another on Thornton in the dying moments after the Senators couldn’t get the puck out of their zone.

After watching Marcus Hogberg pick up the Senators’ first back-to-back wins since last March while recovering from an upper-body injury suffered last week, Murray stayed with Thornton’s initial move down low. The 41-year-old winger then pushed the puck and the goalie’s right pad over the line on the follow-up, but the play was immediately waved off by referee Eric Furlatt.