A new report published today by a leading wealth manager raises serious questions about one of the key marketing claims that many fund management groups make to justify the fees they charge investors for looking after their money. The issue is whether their teams of well paid investment managers are best placed to ensure customers’ savings are protected when markets are volatile, as they are now.

According to research by wealth manager SCM Direct, the investment industry’s claim does not ring true. Indeed, SCM’s examination of the performance of key UK invested funds since the start of the year suggests the opposite.

Rather than protect the value of investors’ holdings, SCM says most of these funds have underperformed the UK stock market, recording losses in the process.

The genie’s out: Are teams of well paid investment managers  best placed to ensure customers’ savings are protected when markets are volatile?

While the FTSE All-Share Index is up overall by 1.5 per cent this year, after some heavy falls and strong rebounds, the average UK fund that SCM has analysed has generated losses of 5.9 per cent. In some cases, they have racked up double digit losses.

Alan Miller, co-founder of SCM, describes the investment numbers as ‘atrocious’. He says: ‘It’s often said that actively managed funds show their mettle when market conditions are tough. It’s a claim expounded by many investment chief executives. But our analysis shows it’s no more than a myth.’

SCM’s analysis also confirms that as well as underperforming this year, a majority of these funds have failed to achieve the long-term objectives spelt out in their marketing material: to outperform the FTSE All-Share Index. Indeed, some funds consistently underperform – in both falling and rising markets.

Today’s report comes against a backdrop of major change in the investment industry. Technology has radically changed the way things are done. An increasing number of investment funds are now run by computers rather than individuals, leading to faceless multi-billion pound investment funds which aim to track specific stock market indices.

Such funds, run by the likes of Vanguard and BlackRock, have become popular because they are cheap to buy. They also provide a certainty that other funds, run by individuals usually working out of offices in the City of London, cannot deliver – namely that their performance will mirror the index they follow, through both the good and bad times.

The rise of index tracking funds has left the ‘active’ investment funds industry – where money is managed by individuals – scrambling to justify its existence and the high fees it levies for its services. Hence the claims that activelyrun funds protect investors’ holdings when shares are in freefall or going through major turbulence.

SCM’s analysis is based on 68 active funds that have a target of beating the performance of the FTSE All-Share Index over the long term. Classed as ‘UK all companies’ funds, they each have assets valued at more than £200million.

The investment funds identified by SCM Direct as having the poorest investment records are shown below. All ten have underperformed the market this year (to the beginning of this month). They have also failed to beat the FTSE All-Share Index in at least three of the five calendar years 2017 to 2021 and under-performed it over the five years to this June. The £1.4billion M&G Recovery fund has the worst record, failing to beat the FTSE All-Share this year and the preceding five calendar years.

On its website. M&G says of funds like M&G Recovery: ‘A good active fund manager will be able to pursue opportunities that could perform well even if overall market values are falling.’ Schroder UK Alpha Plus has also recorded losses this year, while underperforming its benchmark in four of the last five full years. When stock markets fell sharply in March 2020, the chief executive of Schroders insisted that the weakness of index tracking (passive) funds would bubble to the fore. 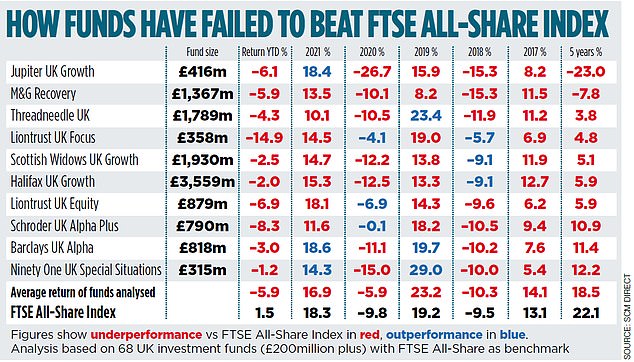 He said: ‘The shortcomings of mechanised trading, better known as passive trading, will come into sharper focus. The answers will not be conjured up by arms-length algorithmic investment management.’

Although the £790million Schroder UK Alpha Plus fund did outperform FTSE All-Share tracking funds in 2020, it has been unable to do so this year against a backdrop of market volatility.

On Friday, M&G said the manager of the Recovery fund, brought in 18 months ago to revive its fortunes, was ‘focused on improving investment returns over the long-term’.

Schroders said its UK Alpha Plus fund had suffered this year from having nothing invested in strongly performing sectors such as energy and commodities.

On Jupiter UK Growth, the worst performing UK fund identified by SCM over the past five years, Jupiter said a new manager appointed in June 2020 was beginning to turn things around (the fund beat the FTSE All-Share in 2021).

It added: ‘We communicate regularly with our clients to explain the current investment process of our managers, and the importance of taking a medium-to-long term view when investing in our funds.’