Crowds of looters overran Manhattan’s Midtown on Monday night in a second night of violence and riots that have prompted officials to crack down further on the chaos and move the city’s 11pm curfew to 8pm despite claiming that the city was ‘fully under control’.

The looters smashed the store fronts of designers but were also seen ransacking Duane Reades and independently owned smoke shops as they snatched all they could before being rounded up by NYPD cops.

They pillaged stores on Fifth Avenue and Madison Avenue more than an hour before the 11pm curfew began.  Further uptown, violence broke out in the Bronx where an NYPD officer was run over and others were beaten in the street.

The carnage at nightfall came after a day in which thousands protested peacefully across the city over the death of George Floyd, a 46-year-old black man who was killed in Minneapolis last Monday when a police officer knelt on his neck for nearly nine minutes.

In the week since, distress has erupted across America as Black Lives Matters protesters fend off violent responses from police forces trying to disperse them and looters and rioters cash in on the chaos.

President Trump has only inflamed tensions by threatening to deploy the military across the country unless state governors crack down further. On Monday night, he finally emerged from the White House after keeping himself hidden away over the weekend to walk to a church for a photo-opp with a bible.

In order for him to get there, police rained tear gas and rubber bullets on a crowd of peaceful protesters.

New York City’s 11pm curfew was announced yesterday afternoon by Gov. Cuomo and Mayor Bill de Blasio. It is the first time the city has imposed a curfew since the 1940s but it did little to stop the looters.

A man could be seen running out of Paul & Shark on Madison Avenue and 61st Street clutching piles of clothing. Smashed glass covered the floor after the storefront was smashed 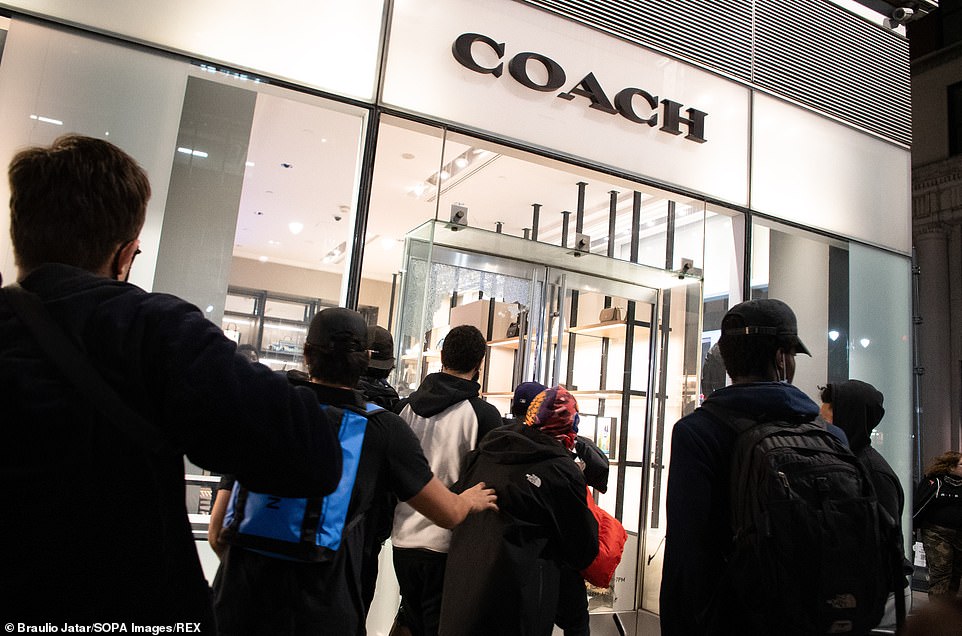 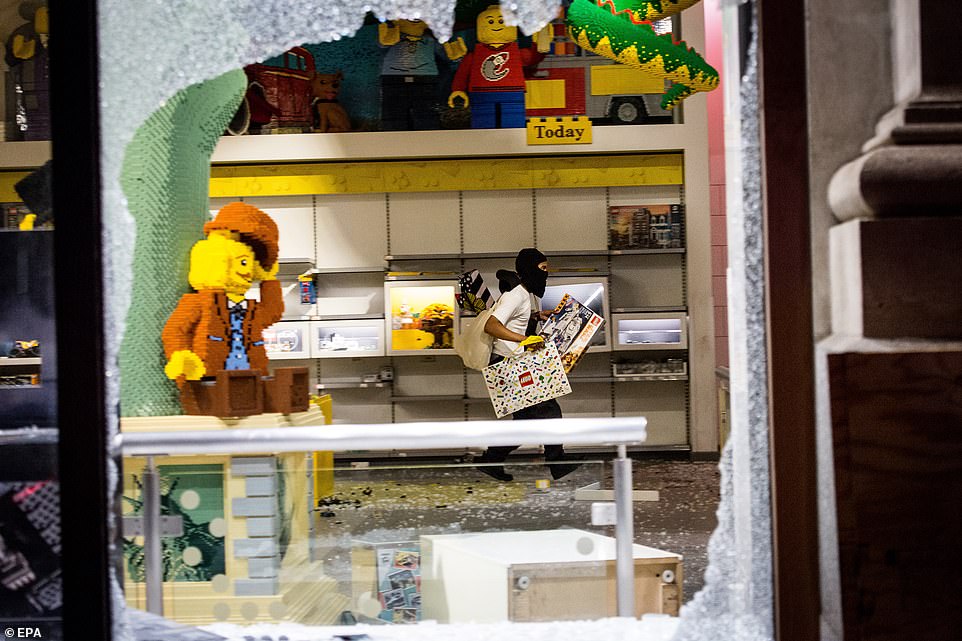 The Lego Store next to Madison Square Park was also hit. One person could be seen running out with large boxes last night 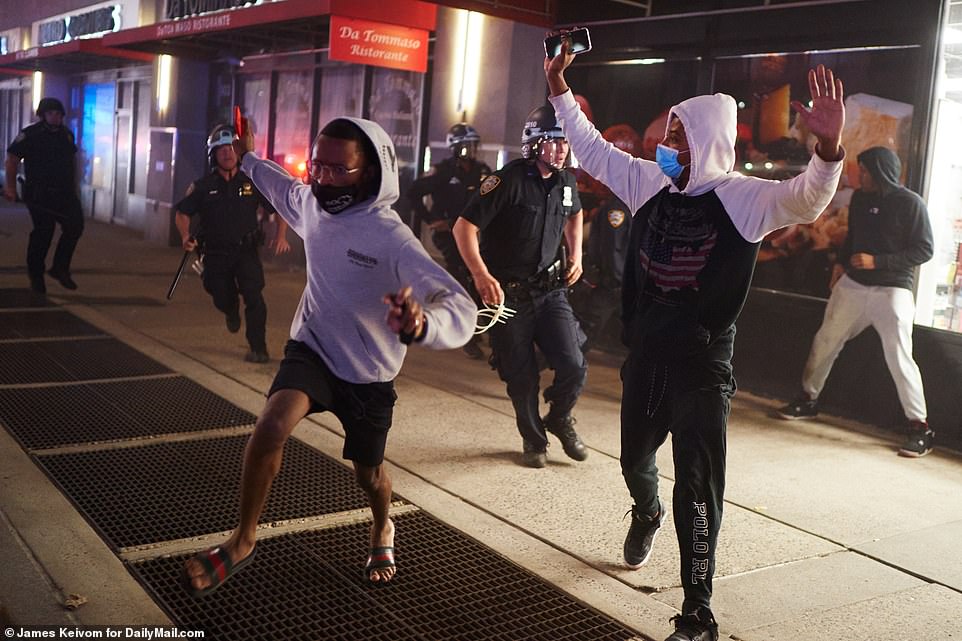 Upmarket fashion store Michael Kors on Fifth Avenue was among the luxury outlets hit, along with Nike and Lego.

Groups of young people moved from block to block around the district – usually bustling with tourists but deserted due to the coronavirus – with entire streets blocked by police.

The city is fully under control and overwhelmingly calm and peaceful. That’s just reality. I’m seeing it with my own eyes,

In an interview with NY1 at 9.40pm, Mayor Bill de Blasio claimed in the same breath that while the city had a ‘real problem’, it was ‘fully under control’.

‘We have a small situation with a small number of people doing looting, trying to take advantage of what they see around the country and this moment, and we’re doing a defense against it and a very strong one – thousands of police officers and now we’re going to impose the curfew earlier.

‘But I’m not just going to accept a misunderstanding of what’s happening in the city.

‘The city is fully under control and overwhelmingly calm and peaceful. That’s just reality. I’m seeing it with my own eyes,’ he said.

Pictures and videos taken across the city tell a different story.

An NYPD official told DailyMail.com on Tuesday morning that there were more than a dozen shootings around the city last night. 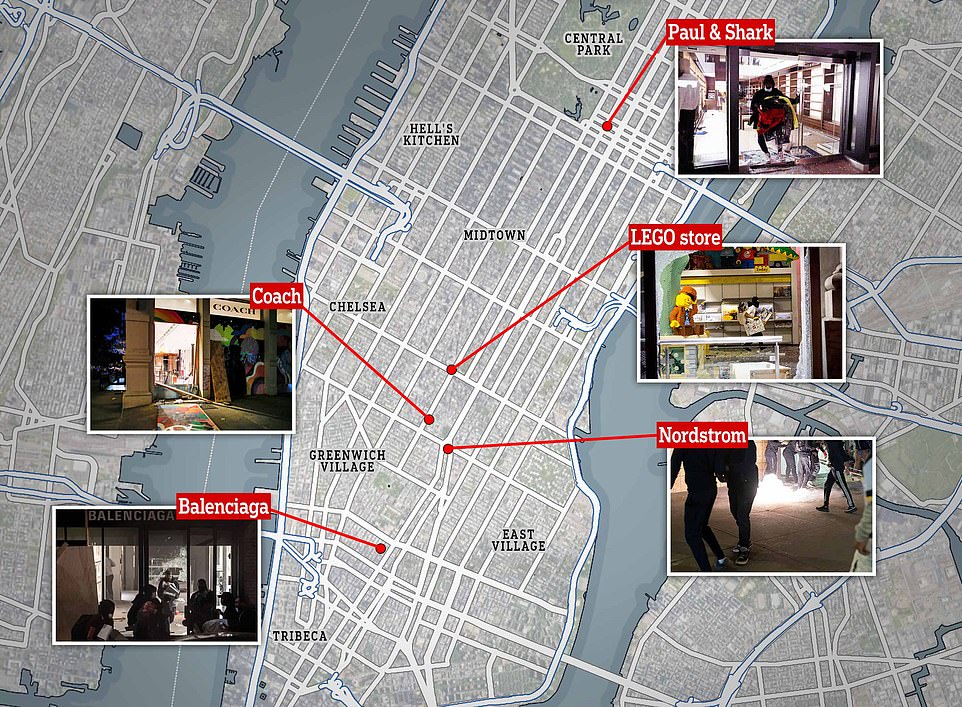 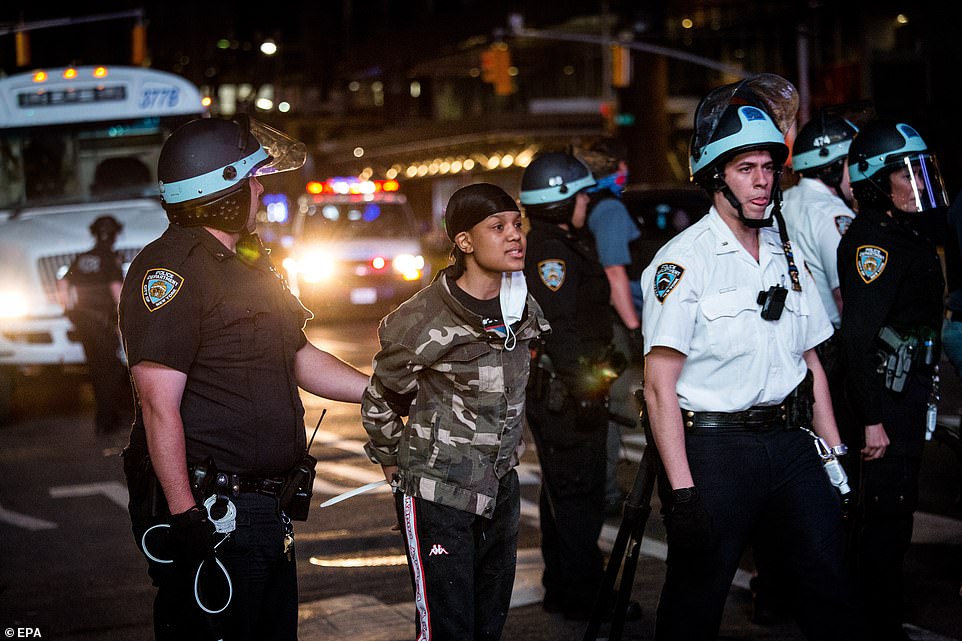 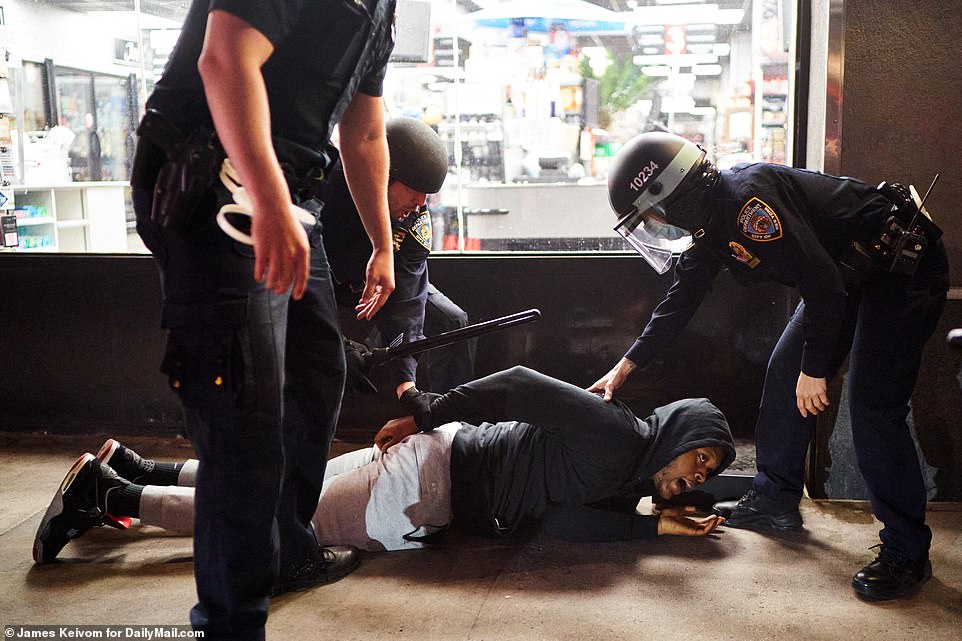 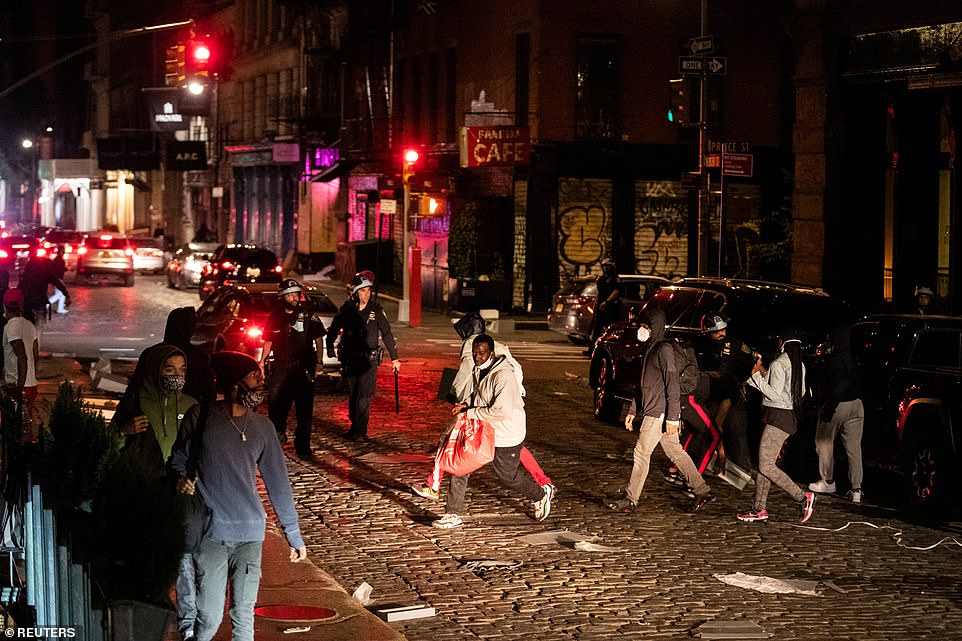 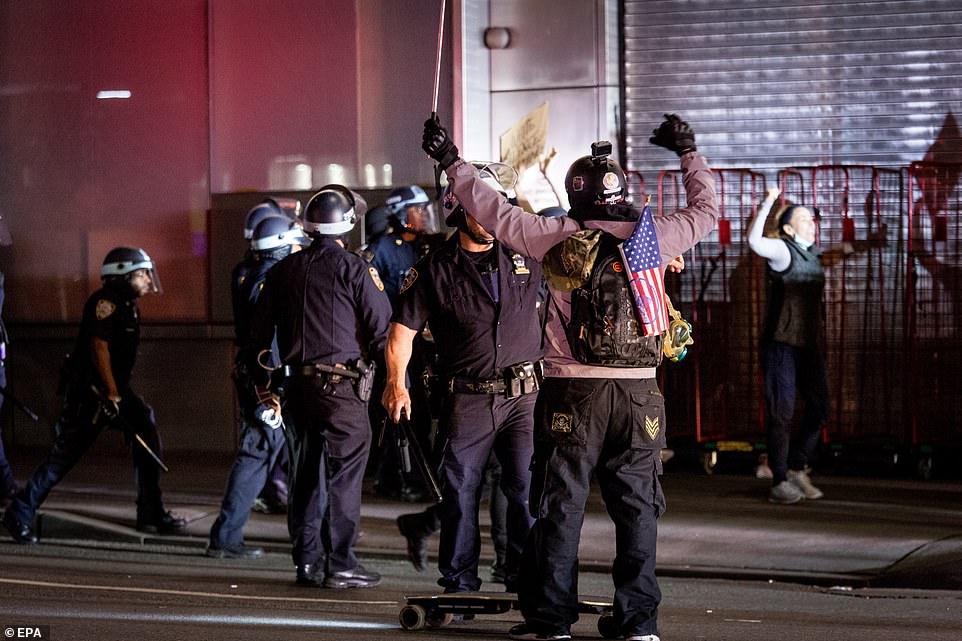 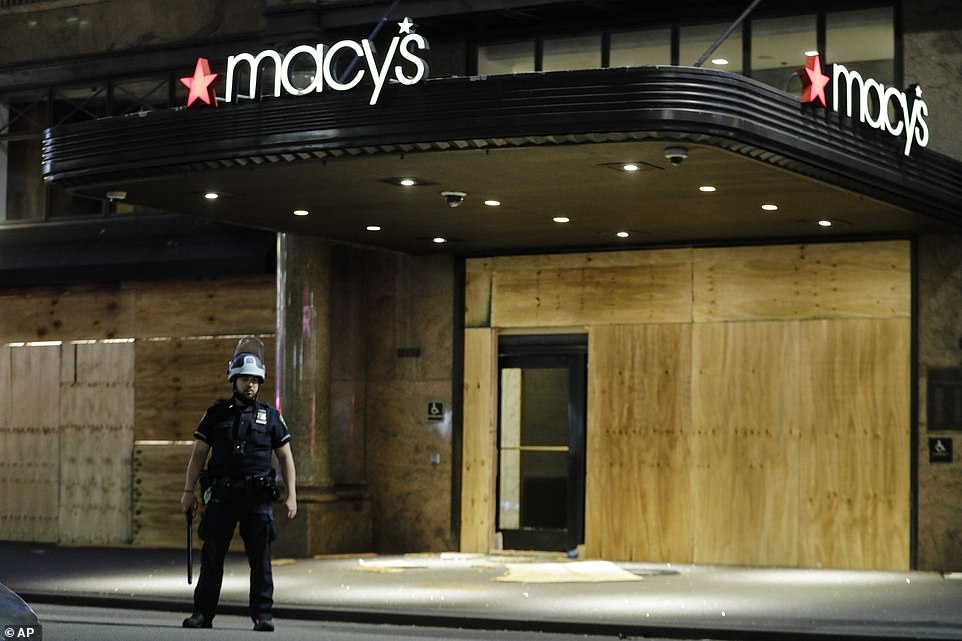 Flagship Macy’s department store was also targeted despite having been boarded up. Pictured: The store bordered up 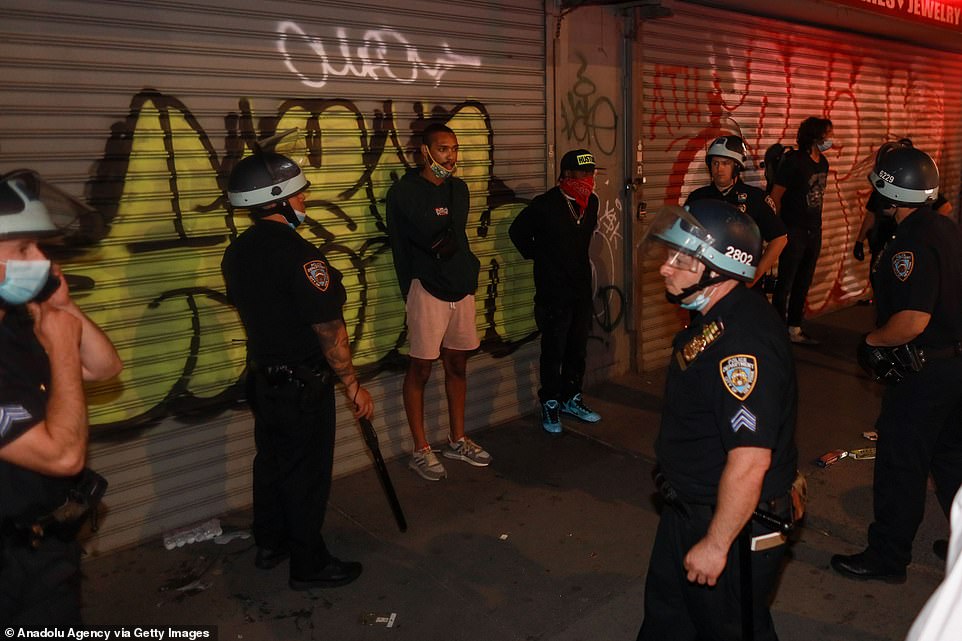 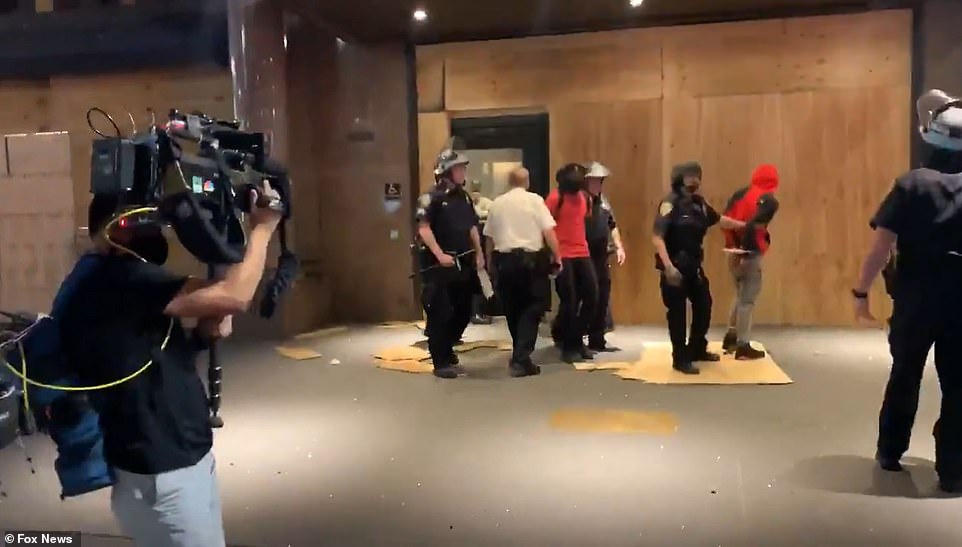 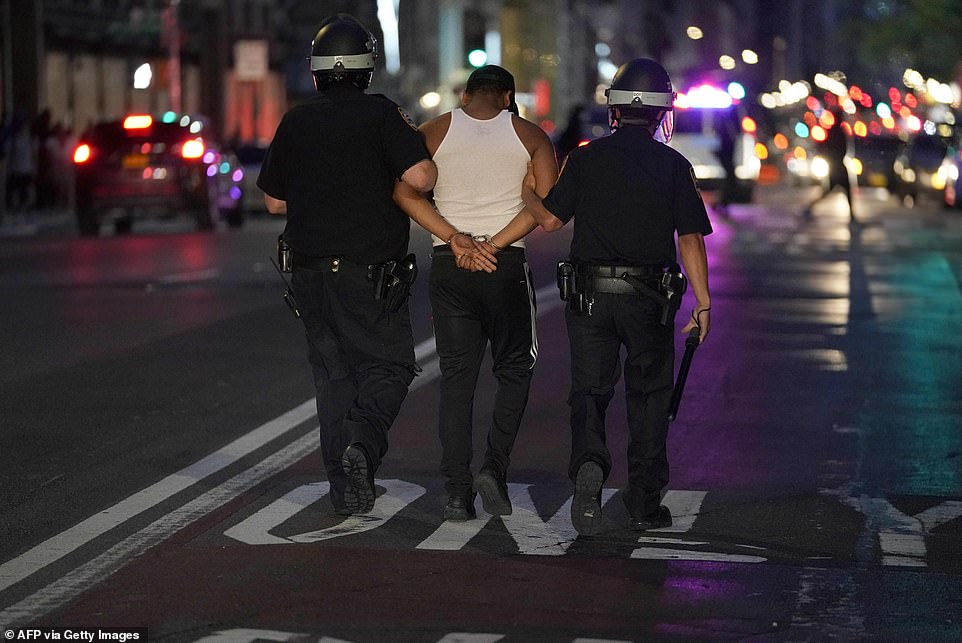 A man was lead away by police after he was arrested during the protest last night. New York Gov. Andrew Cuomo and Mayor Bill de Blasio imposed a curfew on all residents apart from essential workers, anyone seeking medical attention and the homeless yesterday 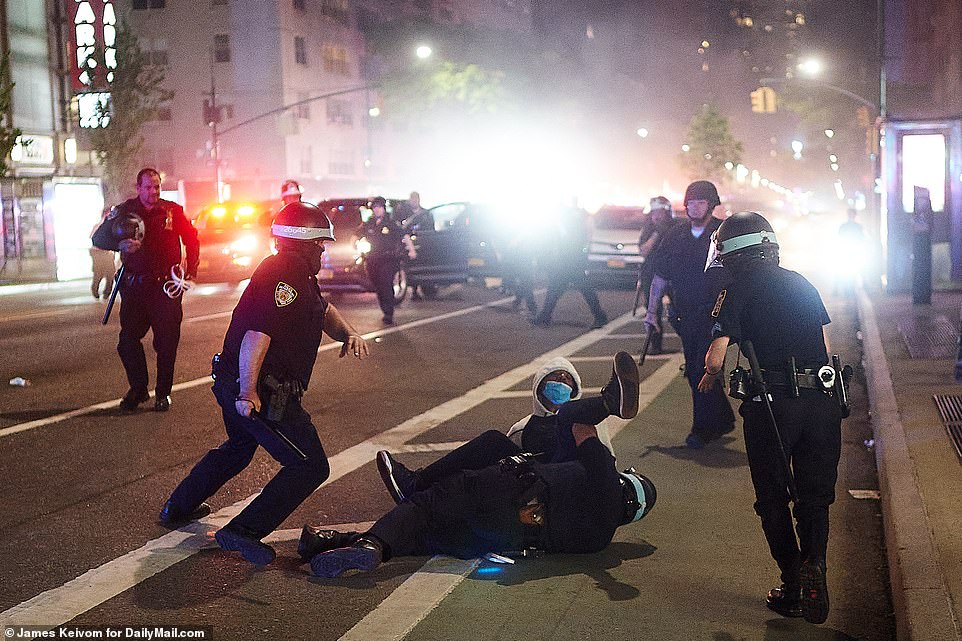 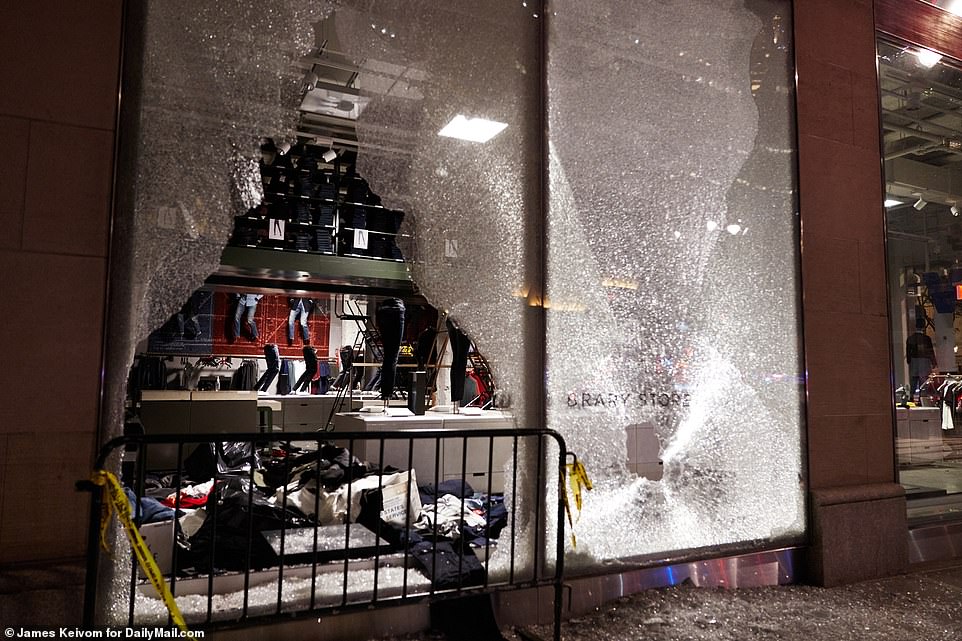 Images from local news showed some young people running out of a Best Buy electronics store before being apprehended by the police. Flagship Macy’s department store was also targeted by looters despite having been boarded up.

Tuesday night’s strategy, the mayor said, is to impose a curfew before it gets dark.

‘He said he and Cuomo – who were criticized for making the curfew so late to begin with – wanted to give people an opportunity to get home on Monday night.

‘Except for a few hours last night, we had not seen any of this kind of activity of large-scale breaking into stores – again, not something we’ve historically seen in New York City – and we wanted to give people time to get home, we wanted to bring it in in a manner that certainly did not disrupt people in communities, and that we thought would be an effective tool.

‘But it’s just, we’re seeing too much of this activity tonight. So, the idea of going to 8:00 PM is it’s still light out. And that’s really what we saw this evening and last night, is when it got dark is when people attempted to do this kind of activity.

‘So, we’re going to just take the next obvious steps and have a curfew that begins while it’s still light out at 8:00 PM tomorrow,’ he said.