It has not been a good weekend for Manchester United managers. While there is no threat of Marc Skinner losing his job like Ole Gunnar Solskjaer, yesterday’s 2-0 defeat against Arsenal showed there is still a significant gap between them and the top.

There was a strange atmosphere at Leigh Sports Village ahead of this game. United’s fans were unhappy the club had announced Solskjaer’s departure right before the women’s huge game against the league leaders and they opted to sing the Norwegian’s name in the 20th minute (Solskjaer wore the number 20 during his playing days).

Skinner’s job, much like Solskjaer’s was, is to turn United from a ‘nearly team’ to European and title contenders. There is still some way to go on that front. And Skinner’s post-match remarks that United need more investment and depth to compete with Arsenal and Chelsea was telling.

‘That’s where we’re at. If we aspire to be in those positions then we need to make sure we’ve got the depth in our team to support the talented players that we have,’ he said.

‘I remember those times. The concern is very logical. We need to invest in the players and continue to invest so we can be where we want to be. 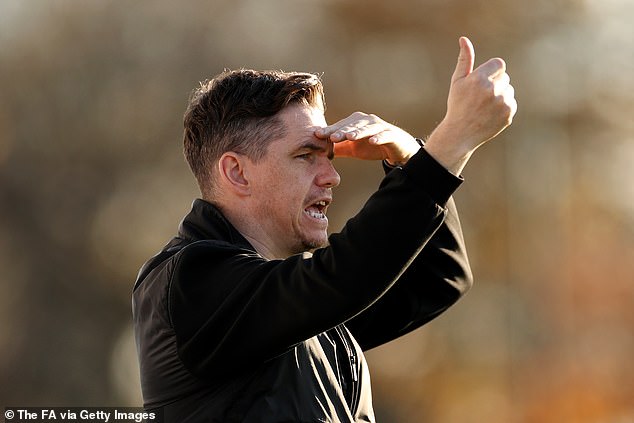 ‘I was never going to come in and wave a magic wand, we lost a lot of forwards in the summer. The talent is there, we just need more depth.’ 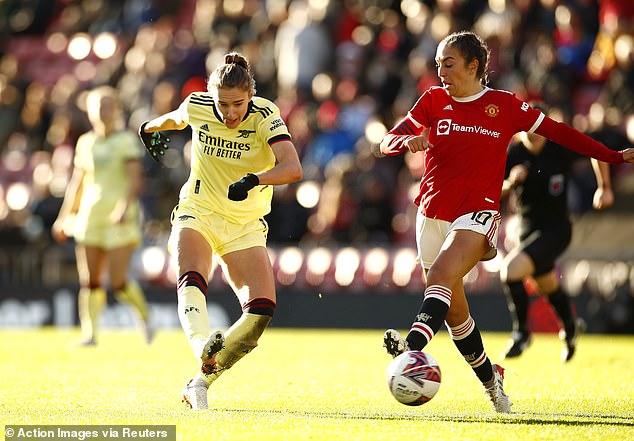 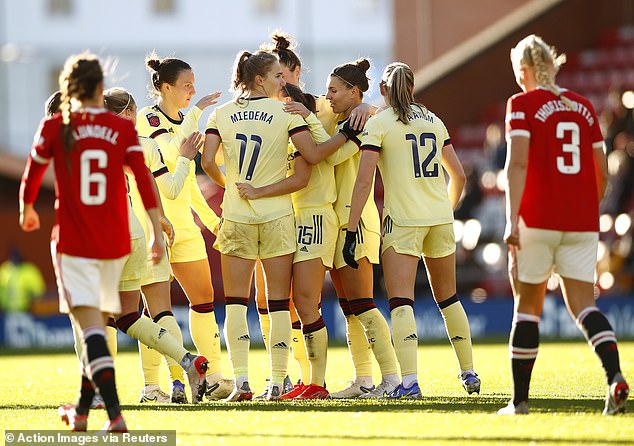 While United were second best, this was not like the 6-1 thrashing they suffered at the hands of Chelsea earlier in the season and a combination of Mary Earps and the crossbar frustrated the Gunners for 45 minutes.

But class eventually told and Vivianne Miedema finally got her goal against the only WSL team who had managed to stop her scoring.

The Dutch striker has now found the net against all of the 14 clubs she has faced in the competition. 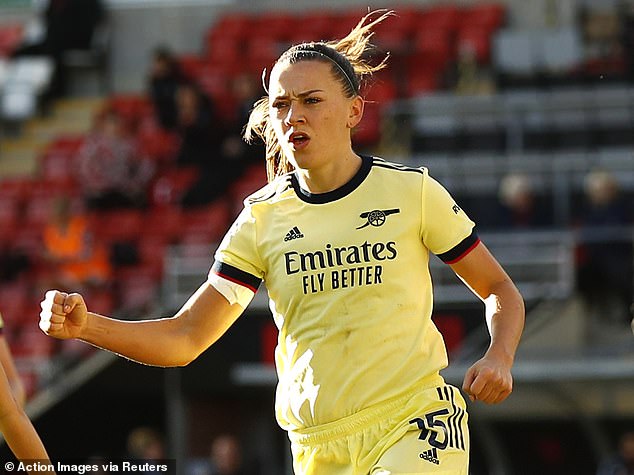 Arsenal had lost five of their last six away games in Manchester before this victory.

A happy day in the cold north west for manager Jonas Eidevall, whose side remain top of the table going into the international break.

‘I don’t worry about Viv not scoring against any opponent,’ Eidevall said.

‘When she hasn’t scored against an opponent, it’s just a matter of time before she will.

The Gunners were on the front foot from the start and almost took an early lead. Katie McCabe cut the ball back to her on the edge of the box and she skipped past Aoife Mannion before rattling a shot against the crossbar.

Mead had another chance mid-way through the first half when she was picked out at the back-post by Kim Little, but her attempted cut-back went straight into the hands of United goalkeeper Earps.

The United goalkeeper was called back into action shortly after when she tipped a stinging Noelle Maritz effort over the bar.

United went in level at the break but it took just three minutes of the second half for Arsenal to find a breakthrough.

McCabe’s pass from the left found Miedema and she held off Katie Zelem to drill a shot into the bottom left corner.

McCabe then doubled Arsenal’s lead from the penalty spot in the 55th minute. The winger was tripped by a lunge from Mannion but picked herself up to convert into the top left corner.

Miedema almost added a third from a free-kick but the crossbar kept the visitors at bay once again.